The Power Balance Is Shifting in London’s Commercial Real Estate

LONDON — For years, landlords have had the upper hand in London’s real estate market, pushing up rents as businesses clamored for prime locations near offices, tourism hot spots and transport hubs and as the city’s population grew and grew. Restaurants were often locked into leases with clauses that allowed the rent to only go up. Retailers faced increasingly exorbitant rents.

Over the course of a year, the pandemic has brought a halt to this arrangement, shifting the power balance between commercial property tenants and landlords.

Confronting the alternative of having empty properties, some landlords have loosened their terms, with offers of rent holidays or other concessions. But in other cases, changes have been forced on property owners by struggling tenants who, in increasing numbers, have turned to an option in Britain’s insolvency law known as a company voluntary arrangement. The result has been slashed rents or a switch to leases that fluctuate based on the tenant’s earnings.

Seeing their prospects dwindle, some property owners are saying the leasing system is outdated and are calling for more transparency and cooperation with their tenants. And a coming legislative review by the British government could bring more change.

The relationship between tenants and landlords “has definitely become more fraught because of the pandemic,” said David Abramson, the founder and chief executive of Cedar Dean, which specializes in helping businesses restructure leases. “Landlords are not used to being in business with one hand behind their back. Generally, they’ve been the more dominating force, and it has been quite aggressive.”

Landlords had to have “a complete change of attitude,” Mr. Abramson said. “A lot of them are still getting their heads around it.”

The changes are playing out slowly, especially for small businesses. Dhruv Mittal, a 29-year-old chef, came to a heart-wrenching decision last summer: He closed his restaurant in central London’s Soho neighborhood after lockdowns had made it impossible to continue.

He had opened the restaurant, DUM Biryani House, four years earlier in a basement space with pop art-inspired posters on the walls, pumping out hip-hop music and serving biryanis in the traditional style of Hyderabad in south-central India, where his father is from.

Despite government measures to help business survive the pandemic, the quarterly rent due on Mr. Mittal’s restaurant, about 25,000 pounds ($34,000), proved to be an insurmountable burden without revenue coming in. He tried to switch to a smaller site, but his landlord company didn’t have anything, and negotiations to reduce his rent weren’t successful.

“Our landlords were quite strong on the fact they would prefer an empty site where then they could charge whatever rent they want to a newcomer than to provide a discount to the current tenant,” Mr. Mittal said.

In August, the landlord came up with an offer: Mr. Mittal could defer paying one quarter of rent — the amount he owned — until 2021. But by then, he had laid off his staff and couldn’t reopen because central London was still deserted. In October, he liquidated his company, still owing tens of thousands of pounds in rent and money to other creditors.

The property still doesn’t have a new tenant; the DUM Biryani House sign hangs above the locked doors. The landlord declined to comment. 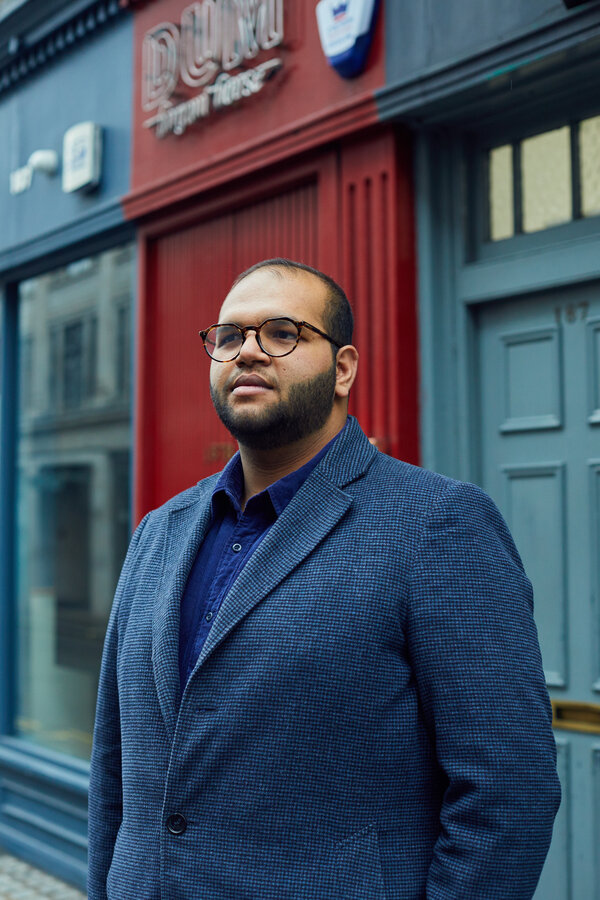 Mr. Mittal would not have been evicted immediately for not paying his rent. Last year, the government put in place a moratorium on evicting business tenants, which has been extended until the end of March. Many businesses have taken advantage of this arrangement, but most unpaid rent will just accumulate as debt that can be demanded as soon as the ban is lifted.

A more contagious strain of the coronavirus and a winter surge in cases have shuttered Britain’s restaurants and shops again. By the time many of these businesses will be allowed to reopen, their doors will have been shut for at least half of the past year. A recent survey found that only about half of retail rents had been collected for the last three months of 2020.

Many tenants urgently need more help.Cedar Dean surveyed 400 leading hospitality companies last month, and three-quarters said they were considering restructuring or insolvency and would need help from either the government or their landlord. Some businesses won’t get enough help and will be forced to close.

Pret a Manger, the coffee and sandwiches chain with nearly 400 stores in Britain, turned to its landlords for concessions after lockdowns crushed its income. It now has 65 percent of its locations on turnover leases, at least temporarily, compared with about a quarter before the pandemic. Turnover rent arrangements, sometimes known as percentage rents in the United States, vary but can include a company’s paying a base rent lower than market rates and topping that with a percentage of gross income.

“We’ve got about 75 to 80 percent of our landlords so far in the U.K. into a good supportive position,” Pano Christou, Pret’s chief executive, said.

Last spring, several landlords were quick to offer temporary discounts to their tenants. But in the summer, Hammerson, a large property development company that owns shopping centers in Britain, went further by saying it would introduce a new leasing system with more flexible agreements, rents revised at cheaper levels and a new rent review system.

“The U.K.’s historic leasing model has served its time,” said David Atkins, the chief executive of Hammerson at the time. “It is outdated, inflexible and needs to change.”

In Britain, the government has traditionally been reluctant to get involved in these commercial contracts, relying on a 1954 law governing the relationship between commercial tenants and landlords.

But that may be about to change. As government ministers have found themselves intervening deeper in the economy, the department that deals with communities and local government said in December that amid a “profound adjustment” in commercial property, it would review “outdated” legislation.

It’s unclear how broad the coming changes may be. But Mr. Abramson has suggestions: He said long leases that mandate rents must rise at regular review periods — so-called upward-only rent reviews — should be abolished. Clauses that allow tenants to leave if the rent in their area becomes too unaffordable should be introduced, he said.

But, he added, companies also shouldn’t be able to use a company voluntary agreement to change their lease terms.

There were fewer insolvencies in 2020 than in the previous year, thanks to billions of pounds in government support, but there has been a jump in company voluntary agreements for large retail, hospitality or leisure companies: 29 businesses started such a process in the second half of 2020, compared with only four in the same period of 2019, according to data by compiled by PwC.

For big companies paying rent at numerous properties, these insolvency agreements have become an increasingly common way to shut down sites and cut rent. Unlike entering administration (Britain’s near-equivalent of Chapter 11 bankruptcy), a company voluntary agreement allows a business’s directors to stay in charge as they restructure the company’s debts. It can be a useful tool for a company that has a path back to profitability.

PwC found that from June to November, 17 large retail and hospitality companies with nearly 3,000 locations started company voluntary agreements, and at two-thirds of the leased properties the businesses reduced their rents or switched to a turnover rent model through the agreement.

Recently, popular names such as the coffee chain Caffè Nero and the healthy fast-food chain Leon have begun company voluntary agreements to reduce their rent debt.

Critics point out that some of the larger companies to fail recently, including Debenhams and Arcadia Group, first went through company voluntary agreements, suggesting the process didn’t lead to a proper restructuring of the business.

The British Property Federation, which represents landlords and developers, said the system was being “abused,” especially by companies backed by deep-pocketed private equity firms. Despite the frustrations about insolvency agreements, Melanie Leech, the chief executive of the group, is still recommending to landlords that the best way out of this crisis is to work more closely with their tenants.

“Landlords’ options are diminishing,” she said. “The longer this goes on, the more economic damage there is.”