Home » Business » To Juice the Economy, Biden Bets on the Poor

To Juice the Economy, Biden Bets on the Poor

WASHINGTON — To jump-start the ailing economy, President Biden is turning to the lowest-paid workers in America, and to the people who are currently unable to work at all.

Mr. Biden’s $1.9 trillion economic relief package, which cleared the Senate on Saturday and could be headed for the president’s signature in a matter of days, would overwhelmingly help low earners and the middle class, with little direct aid for the high earners who have largely kept their jobs and padded their savings over the past year.

For the president, the plan is more than just a stimulus proposal. It is a declaration of his economic policy — one that captures the principle Democrats and liberal economists have espoused over the past decade: that the best way to stoke faster economic growth is from the bottom up.

Mr. Biden’s decision to take that approach in his first major economic legislation is in stark contrast to President Donald J. Trump, whose initial effort in Congress was a tax-cut package in 2017 that largely benefited corporations and wealthier Americans.

The “American Rescue Plan” advanced by Mr. Biden includes more generous direct benefits for low-income Americans than the rounds of stimulus passed last year under Mr. Trump, even though it will arrive at a time when economic and coronavirus vaccine statistics suggest the broad economy is poised to take flight. It is more focused on people than on businesses and is expected to help women and minorities in particular, because they have taken an outsize hit in the pandemic recession.

Researchers predict it could become one of the most effective laws to fight poverty in a generation. Columbia University’s Center on Poverty and Social Policy estimates that the plan’s provisions, including a generous expansion of tax credits for low-income Americans with children, would reduce the poverty rate by more than a quarter for adults and cut the child poverty rate in half.

As with Mr. Trump’s stimulus bills, the new legislation contains provisions intended to attack the virus itself, including money for Covid testing and vaccine distribution.

But it also includes elements of longstanding Democratic priorities that will apply widely to lower-income Americans whether they are hurting financially from the pandemic or not. In addition to the tax credits, the bill increases subsidies for child care, broadens eligibility under the Affordable Care Act, and expands food stamps, rental assistance and unemployment benefits, among other provisions. Mr. Biden also tried to include a $15 minimum wage in the bill, but it did not survive Senate parliamentary rules.

Mr. Biden’s economic team is betting that a mix of $1,400 checks to individuals, more generous jobless aid and other safety-net benefits in the plan will help power a rapid increase in economic growth by aiming money at people who need help right now to pay their bills, buy groceries and stave off eviction or foreclosure — as opposed to higher earners who would be more likely to save the money.

Many economists predict that the increase in consumer spending would spur more hiring and business production, helping to lift the economy to its fastest annual growth rate since the mid-1980s.

Mr. Biden’s plan has angered congressional Republicans, who have pushed the president to focus his efforts on supporting businesses crippled by the pandemic and lifting any remaining barriers to the full reopening of economic activity as soon as possible. It has also drawn warnings from Wall Street traders and high-profile liberal economists, like the former Treasury secretary Lawrence Summers, who fear that pouring so much fuel on the economy will stoke dangerously high inflation.

But much of what conservatives and fiscal hawks call wasteful, untargeted or counterproductive spending in Mr. Biden’s bill are, in the eyes of Mr. Biden and his allies, the key ingredients for a roaring recovery once widespread vaccine distribution restores a sense of normalcy across the nation.

“Focusing on marginalized workers,” said Janelle Jones, the chief economist at the Labor Department, “is really the way to make sure we are lifting all boats.” 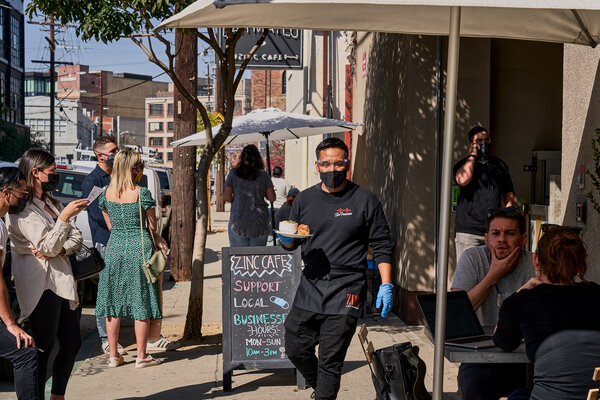 Like Mr. Biden’s, Mr. Trump’s first major piece of legislation was scored by budget analysts as adding nearly $2 trillion to the federal debt. Like Mr. Trump, Mr. Biden has employed a parliamentary process that allows his bill to pass without a single vote from the opposing party. Both presidents cast their respective plans as crucial aid for economies mired in growth that was unacceptably slow.

But unlike Mr. Biden, Mr. Trump pursued a top-down approach to reinvigorating economic and wage growth. He cut taxes for corporations and other businesses, alongside cuts in individual tax rates up and down the income spectrum. His advisers predicted that the moves would significantly accelerate business investment and generate a sustained economic boom that would in turn drive up incomes for low earners and the middle class, even though the direct benefits of the bill were disproportionately concentrated among the rich.

A sustained investment increase did not materialize as predicted, but economists generally agree that the cuts helped to temporarily bolster economic and wage growth in the year after they passed.

High earners and large companies show little sign of needing government help today. On the whole, the pandemic recession and recovery have made them richer. Workers earning higher wages and those able to work remotely are far less likely to have been thrown off the job, and they have stockpiled savings in the recovery. Companies like Amazon have gained market share as consumer habits have shifted.

But at the bottom end of the income spectrum — and in particular, among Black and Latino families — millions of Americans are still feeling the deep pain of the recession. The economy remains nearly 10 million jobs short of its prepandemic peak, with women of all races and men of color struggling the most to regain employment. The unemployment rate for Black men remains above 10 percent.

Data from the Census Household Pulse survey, analyzed by Lena Simet, a senior researcher on poverty and inequality at Human Rights Watch, shows that the lingering economic distress of the crisis is concentrated among low earners and those who remain out of work. Nearly half of households earning below $35,000 a year reported falling behind on housing payments. One quarter reported not having enough food.

Mr. Biden’s plan would shower those households with government assistance. Elizabeth Pancotti, the policy director at Employ America, a group in Washington that backs the Biden plan, has calculated the benefits for several different hypothetical hard-hit Americans under the bill.

For a working single mother of a 3-year-old who earns the federal minimum wage — just under $16,000 a year — the bill would provide as much as $4,775 in direct benefits, Ms. Pancotti estimates. For a family of four with one working parent and one who remains unemployed because of child care constraints, the benefits could total $12,460.

The Tax Policy Center in Washington estimates that the direct payments and expanded tax credits in the bill would, by themselves, increase after-tax income this year by more than 20 percent for an average household in the lowest quintile of income earners in the United States. It previously had forecast that Mr. Trump’s tax cuts would raise that same group’s income by less than 1 percent in the first year.

“It is as far away as you can get from regressive, supply-side economics,” said Senator Michael Bennet, Democrat of Colorado, a longtime champion of an expanded child tax credit to fight poverty. “This is progressive economics that puts money in the hands of working people who will spend that money.”

Previous economic aid packages, including those signed by Mr. Trump last March, helped unemployed workers and low earners weather the crisis thus far and even, in many cases, save some money. Research from the JPMorgan Chase Institute shows that low earners spent those savings down faster in the summer than higher earners, which suggests that they could use more help in the recovery and would most likely put that money to work in the economy.

“I don’t know that we really need to stimulate demand among high-earning families, or families that haven’t suffered financially,” said Fiona Greig, a president of the institute.

The Biden plan, particularly the direct payments, will provide some help to Americans who have not struggled financially over the past year, a fact the White House says is inevitable. Republicans, business groups and many economists have criticized the direct payments on those grounds, even after Democrats moved this week to restrict checks to individuals earning less than $80,000 a year and households earning less than $160,000.

Republicans have also warned that the plan could discourage Americans from working, both by offering tax credits not tied to employment and by providing a $300-per-week supplement to unemployment benefits that runs through the start of September, which critics say could effectively pay people more to stay at home than they would get on the job.

Research from economists at the University of Chicago and the JPMorgan Chase Institute found little evidence that a temporary round of $600 supplemental benefits that Mr. Trump signed into law last year discouraged the unemployed from taking jobs.

There is a risk that the disincentive could be larger this year, if the economy opens rapidly and jobs become widely available, said Peter Ganong, a University of Chicago economist who was one of the paper’s authors. But there is also a risk, he said, that the economy will not reopen as quickly as hoped — if, for example, new strains of the virus prove resistant to vaccines. In that case, the supplemental benefits could help people stay in their homes, put food on the table and keep the consumer spending engine of the economy running.