A day after GameStop shares rose 135 percent — a wild upswing spurred by an online army of investors on a mission to challenge the dominance of Wall Street — Robinhood, the stock-trading app at the center of it all, clamped down.

The limits on trading by Robinhood and other online brokerages, put in place as fears of market instability grew more widespread, set off a furious outcry among small investors. They claimed that the very apps that had democratized trading — Robinhood in particular — were now doing the bidding of Wall Street.

Small groups of investors protested outside the New York Stock Exchange and at the Menlo Park, Calif., headquarters of Robinhood, a company that popularized the notion of commission-free trading. At least one aggrieved trader filed a lawsuit. Politicians on both the left and right weighed in. Before long, a trading strategy involving an obscure stock had morphed into a symbol of class warfare — pitting young upstarts against established Wall Street investors.

“You know the story of Robin Hood, this disenfranchised group of rebels stealing from the elite establishment and gifting that money to the poor,” said Travis Shetler, 21, a college student in Meadville, Pa., who bought shares of GameStop and Nokia in recent days. “The irony of an app like that pandering to the elite is quite obvious.”

Robinhood said the additional restrictions on trades of GameStop and some other companies were necessary to ensure it didn’t run afoul of government regulations. The curbs allowed users to only sell shares they owned and repurchase shares they had borrowed and sold, effectively halting the kinds of options bets that drove the rally. It also raised margin requirements for certain securities, meaning investors needed to keep more of their own money in their accounts when placing trades using funds they had borrowed from Robinhood. It later halted all margin trading involving GameStop and the movie theater chain AMC.

Webull, another trading app, said customers could only liquidate positions they already had in GameStop. Another, Interactive Brokers, put its own guardrails around several popular securities.

GameStop shares recovered some losses to end the day down 44 percent. The shares then rebounded significantly in the after-hours trading session, after Robinhood said it would “allow limited buys of these securities” on Friday. Many Robinhood customers used Twitter to post notices from the firm letting them know it had sold off some of their positions, without their permission. The firm said “unprecedented volatility” and an effort to help reduce risk had prompted it to sell shares and options contracts for GameStop and AMC.

The rise and fall (so far) of GameStop 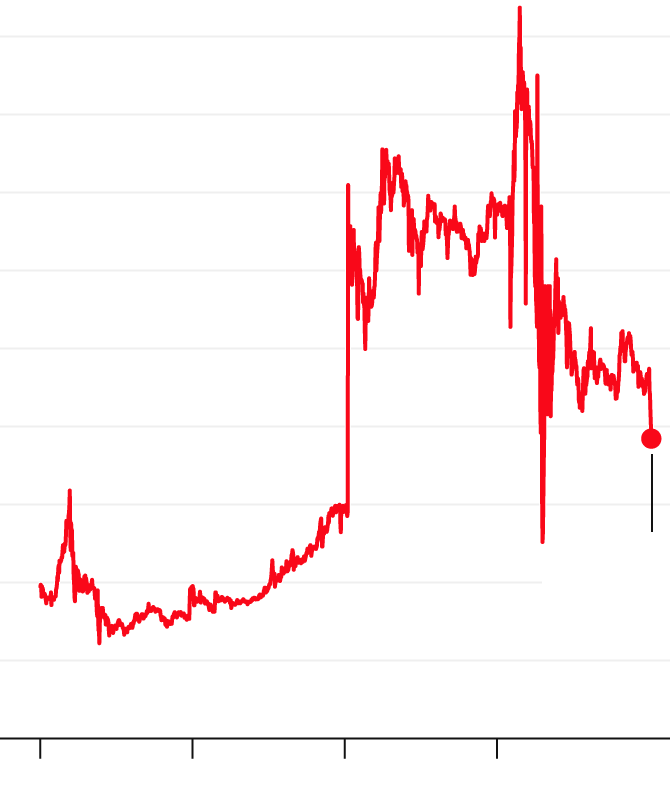 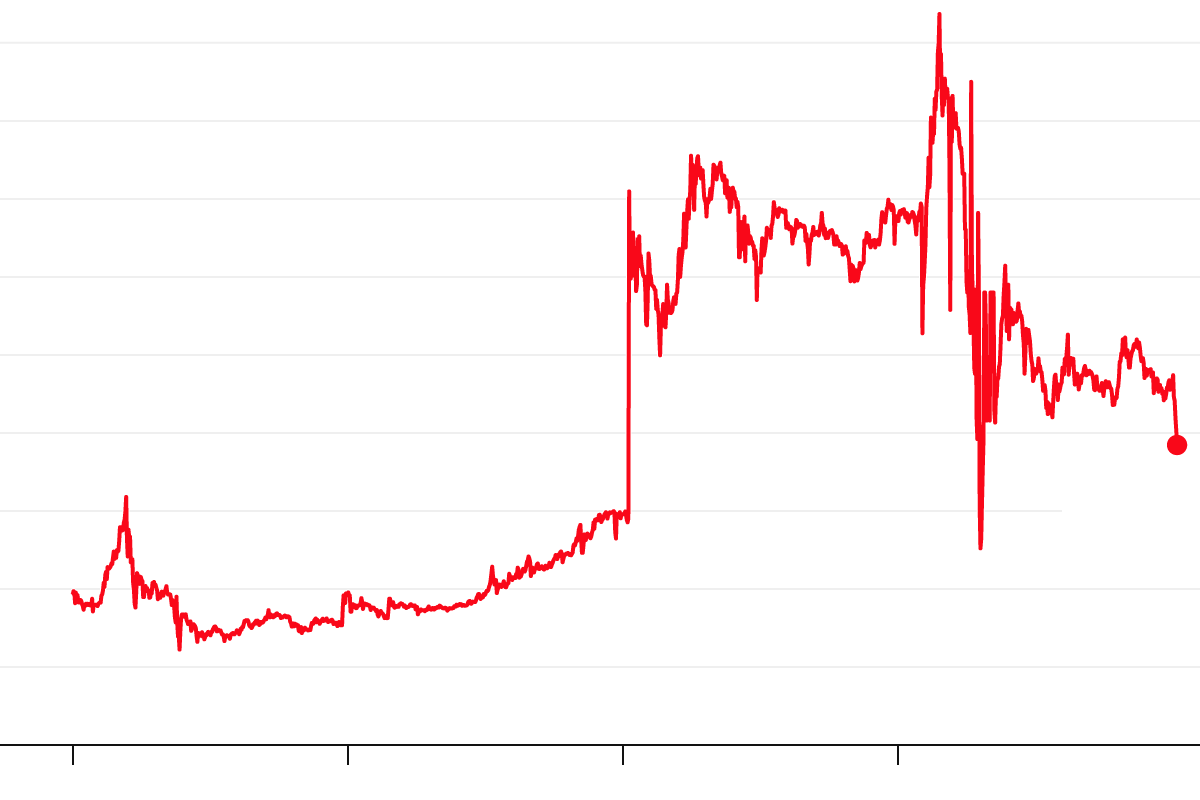 By The New York Times

“A lot of regular, hard-working Americans have been putting their money in hoping and praying they can get something out of it during a time when everyone is struggling,” he said. “It felt like it was not just a betrayal, but completely unethical in so many ways.”

The upheaval arrived at an inopportune time for Washington. With the Biden administration barely a week old, its nominee to be the next Securities and Exchange Commission chairman, Gary Gensler, has yet to have a hearing. And a standoff over the filibuster has delayed Congress’s attempts to organize itself into committees.

Senator Sherrod Brown, Democrat of Ohio, the incoming chairman of the Senate Banking Committee, responded to the market mayhem, vowing to hold a hearing on what he called the “broken” Wall Street system. “People on Wall Street only care about the rules when they’re the ones getting hurt,” he wrote on Twitter.

The restrictions placed on Robinhood traders even made allies of Representative Alexandria Ocasio-Cortez, Democrat of New York, and Senator Ted Cruz, Republican of Texas — who have spent the past three weeks sparring over the violence at the Capitol on Jan. 6.

“We now need to know more about Robinhood’s decision to block retail investors from purchasing stock while hedge funds are freely able to trade the stock as they see fit,” Ms. Ocasio-Cortez wrote on Twitter. “As a member of the Financial Services Committee, I’d support a hearing if necessary.”

Though the trading platforms’ decision to curb speculative trading was deeply unpopular with casual traders, it was not unheard-of. Steps such as banning trading on margin — that is, using funds borrowed from your broker — are common for brokerages that face growing risks from volatile securities that are in the midst of a price spike. Through the end of trading on Wednesday, GameStop’s stock was up 1,700 percent in January alone.

Robinhood, a firm backed by venture capital, said it had decided to limit the buying of securities like GameStop because of the regulations that govern it, including capital obligations mandated by the S.E.C., rather than pressure from Wall Street.

“To be clear, this was a risk-management decision, and was not made on the direction of the market makers we route to,” the company said in a statement. “We’re beginning to open up trading for some of these securities in a responsible manner.” 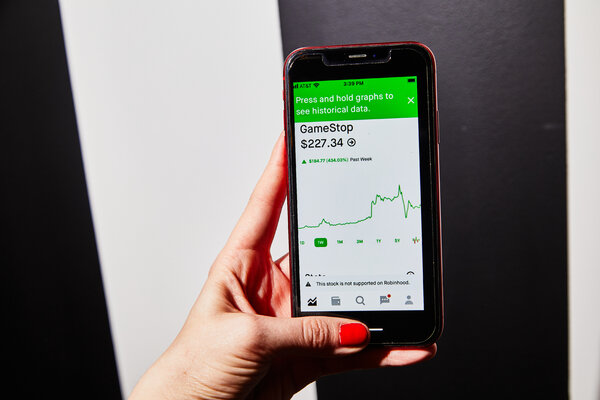 This week’s trading spree forced Robinhood to draw down on a line of credit of between $500 million and $600 million from six big Wall Street banks on Thursday, most likely because it needs more cash to cover heightened margin requirements imposed by the central clearing facility for stock trades, a person familiar with the matter said. A spokesman for the central clearing facility, the Depository Trust & Clearing Corporation, confirmed that the clearinghouse had indeed increased its margin requirements.

Several hedge funds on the losing side of these trades have also struggled in recent days.

Large hedge funds, which often copy one another’s trades, wagered that the future prospects of companies like GameStop, AMC Entertainment and others were dim, and engaged in short-selling — a kind of trade where they would make money if those companies’ shares fell. But because small investors began taking the opposite side of the trade, egging on one another via message boards and buying up shares and options of those companies, their share prices rose instead.

As prices soared, those hedge funds were forced to absorb losses on their soured wagers. But the effects won’t necessarily stop there. If they’re battered badly enough, these funds could be forced to sell off shares in other companies to cover their losses — setting off a market downturn that would eventually ripple through businesses far removed from the action. As the GameStop saga played out, the S&P 500 suffered its largest daily decline in months on Wednesday, falling 2.6 percent.

“The contagion risk is simple: There’s a bunch of hedge funds out there and they’re all doing the same things,” said Nathan Koppikar, a portfolio manager at the San Francisco short-selling fund Orso Partners.

In recent days, with GameStop shares soaring toward $500, phones on Wall Street were buzzing with texts sharing rumors about double-digit losses at a number of large hedge funds affected by the squeeze, say traders who received them.

While Melvin Capital, which needed a $2.75 billion infusion from the money managers Point72 and Citadel on Monday, appeared to be the worst hit, Point72 itself was also suffering. By the time markets closed on Wednesday, returns at the firm, which is run by the billionaire Mets owner Steven A. Cohen, had fallen nearly 15 percent year to date, according to a person with knowledge of the results. Part of the problem: A longstanding investment of roughly $1 billion that Point72 had made in Melvin, which manages money on Point72’s behalf.

That same evening, returns at Citadel, the large Chicago asset-management firm, were down by single digits, according to a person familiar with Citadel’s results. Citadel was also exposed to the market turmoil through its separate securities division, where it executes orders to buy and sell stock from Robinhood customers as part of an arrangement in which it, and other firms, pay the online brokerage firm for access to orders.

The situation facing the hedge funds is akin to a classic short squeeze: The amateur investors are pushing up the price of a stock the big players have bet against. And the pressure to avoid losses could force the shorts to buy, further driving up the price and making the casual traders a mint.

Even after Thursday’s fall tested their nerves, users in the online forums that launched GameStop’s improbable rise — like the Wall Street Bets forum on Reddit — encouraged one another to stay strong and hold their positions.

And he had no intention of selling GameStop, which had soared to as high as $483 on Thursday, before tumbling to settle at $193.60. The price, he said, would rise again — if all goes well.