The UK is likely to be the hardest hit by Covid-19 among major economies, the Organisation for Economic Co-operation and Development has warned.

Britain’s economy is likely to slump by 11.5% in 2020, slightly outstripping falls in countries such as Germany, France, Spain and Italy, it said.

If there were a second peak in the pandemic, the UK economy could contract by as much as 14%.

“The crisis will cast a long shadow over the world,” the OECD added.

In its latest assessment, the OECD found that the UK’s largely service-based economy meant that it had been particularly badly hit by the government’s lockdown restrictions.

The services sector, including financial services, hospitality and tourism, makes up about three-quarters of the UK’s GDP. 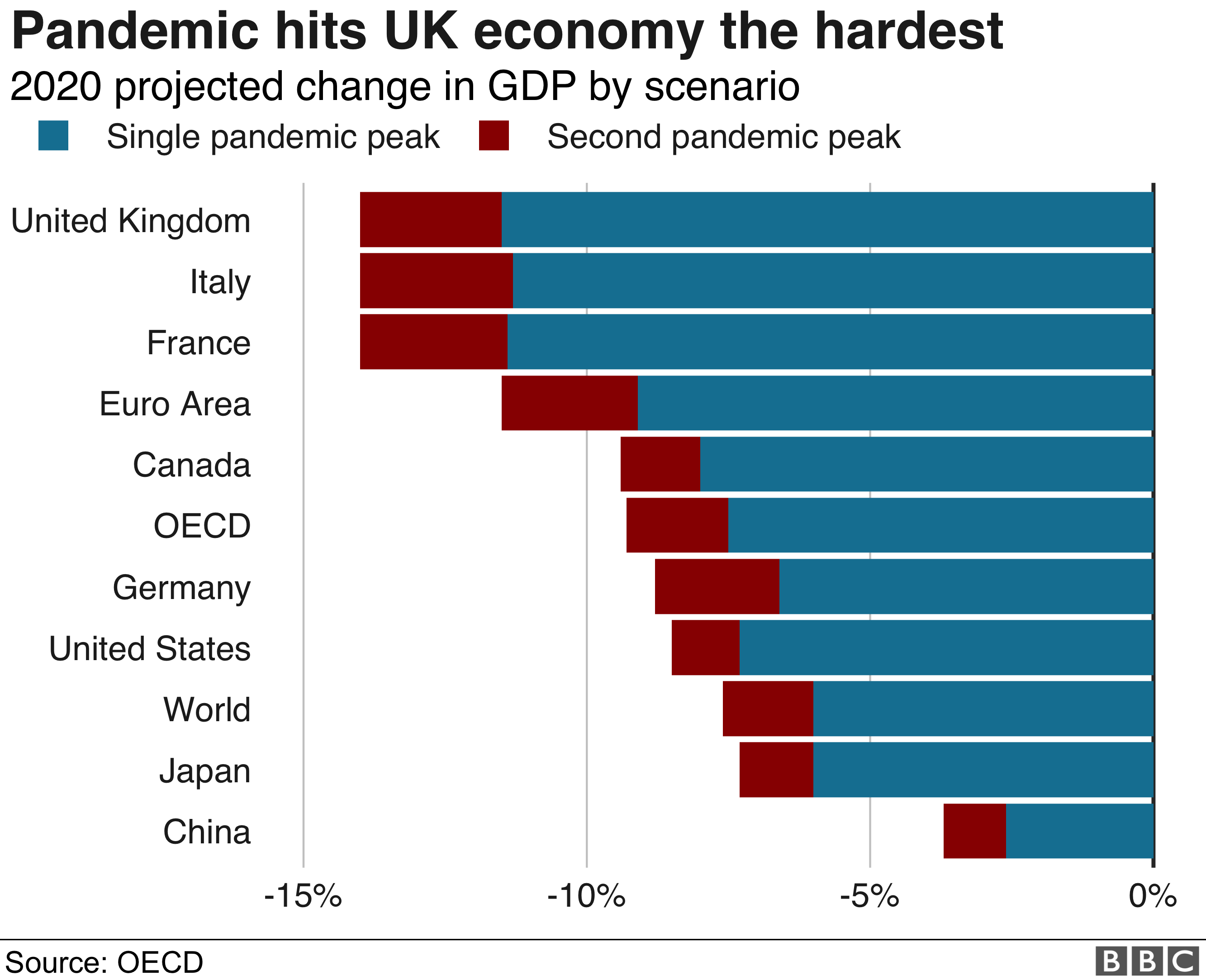 In response to the think tank’s report, Chancellor Rishi Sunak said the UK was not the only one to suffer: “In common with many other economies around the world, we’re seeing the significant impact of coronavirus on our country and our economy.

“The unprecedented action we’ve taken to provide lifelines that help people and businesses through the economic disruption will ensure our economic recovery is as strong and as swift as possible.”

“The government’s failure to get on top of the health crisis, delay going into lockdown and chaotic mismanagement of the exit from lockdown are making the economic impact of this crisis worse.”

The central finding of the OECD forecasts is that the expectations or hopes of a rapid bounceback in the economy – a so-called V-shaped chart – is not now happening.

As Secretary General Angel Gurria put it to me, it will be “U-shaped”, the question is how long will be the period at the bottom of this “U”.

This pattern is not affecting all countries equally.

And in the event of there being no further peak, the prediction is that the UK is the worst hit this year, though just a little bit worse than Italy and France.

For those who like a glass half full, it also predicts the strongest growth in the UK at 9% for 2021. But that is a rather hollow prize.

The reason why is that the UK economy is peculiarly exposed as a trading economy with significant service and tourist sectors.

But it is also a nation that has been among the hardest hit by the underlying pandemic.

This hit comes despite a much-praised rapid response deploying tens of billions to keep millions of workers on payrolls.

The OECD also mentions the pandemic economic impact being “compounded” by the looming plausible failure to sign a trade deal with the EU and new trade barriers with the European Union at the end of the year.

It recommends temporarily extending the UK’s stay in the single market. That is advice that the government has shown no inclination to follow so far.

The bigger point is that the OECD is subtly pointing to the fact that one rescue package is not enough.

Late last week the Germans announced a massive 4% stimulus to the economy, including a thumping cut to VAT, and significant subsidies for the purchase of cars.

The league table is an invitation to do more. And we will soon enough get actual hard economic data, as opposed to forecasts such as this, when the monthly GDP figure for April – entirely locked down – is published on Friday.

The OECD said the pandemic had started to recede in many countries and activity had begun to pick up, but it does not expect a convincing recovery. It sees the outlook for public health as extremely uncertain.

OECD chief economist Laurence Boone said the pandemic would have “dire and long-lasting consequences for people, firms and governments”.

She added: “Extraordinary policies will be required to walk the tightrope towards recovery. Even if growth does surge in some sectors, overall activity will remain muted for a while.”

The OECD looked at two scenarios for how the pandemic might unfold, depending on whether there is a second wave of contagion or not before the end of this year.

If that does happen, two countries – France and Spain – would suffer even deeper declines in economic activity than the UK this year.

The report describes both outlooks as sobering, but either way, the deep recession now unfolding will be followed by a slow recovery.

In the more severe case, the global economy could shrink by 7.6% over this year, the OECD says.

That figure is significantly worse than predictions put forward by other agencies, such as the International Monetary Fund and the World Bank, which have warned about the high level of uncertainty attached to their forecasts.

By the end of 2021, the report says that five or more years of income growth could be lost in many countries. It says the impact on livelihoods will be especially severe among the most vulnerable groups.

The OECD also says the pandemic has accelerated the shift from what it calls “great integration” to “great fragmentation”.

That is essentially a setback for globalisation, reflected in additional trade and investment restrictions and many borders that are closed at least while the health crisis persists.