Not that he doesn’t embrace the concept, but he and the Italian department store drifted away from the now-popular word in conceiving the company’s latest advertising campaign, which resulted in an illustrated manifesto mirroring the shift the retailer made from defining itself as a “house of brands” to a “house of values.”

“We had all our vision and history very clear in our minds but we never narrated it,” said Cocchini while presenting the campaign digitally on Thursday. “We started from the word ‘sustainability’ knowing that we didn’t want to use it because it has been an abused term and I personally consider it a word belonging to the last decade. Today, the concept has been enriched with so many new values that this term alone isn’t enough to express them all.”

For this reason, the company picked five words representing its pillars and grouped them under the common payoff “Keep It Beautiful,” intended to telegraph the retailer’s ultimate commitment to preserving and perpetuating beauty. Each flanked by colored illustrations designed by German artist Lisa Tegtmeier, the terms appearing in the ads are: respect, creativity, research, emotion and diversity.

Photos of Vivienne Westwood’s Career From the Fairchild Fashion Archives

Respect pays a primary role for Cocchini, who referenced it not only in the company’s approach to consumers, 1,500 employees and 3,600 brands showcased in the nine Rinascente units across the country, but especially to the Italian territory.

In fact, what sets Rinascente apart from its competitors is the location of its units, which are all integrated in the city center of the different cities, therefore playing a key role for these urban areas not only commercially but also culturally and socially.

In addition to retracing the company’s importance for employees and its role as an ambassador for Made-in-Italy products, Cocchini particularly highlighted how the stores are not housed in new constructions but in historic buildings the retailer has revamped.

“It’s easy to talk about the sustainable materials, LED lighting systems and such used in designing stores but these are prerequisites nowadays. Our biggest impact is on urban city centers,” said Cocchini, who also noted that the retailer’s social role in the different cities has been amplified by COVID-19.

“We don’t want only to benefit from this sort of positioning but proactively contribute to the urban social tissue,” continued the executive, citing the enhancement of the metropolitan environment and contribution in upgrading the areas surrounding its stores. Case in point, the current renovation works aimed at enlarging the sidewalk where its Roma Tritone location stands.

“We’re investing three million euros in the project, which extends in the Via del Tritone and Via Due Macelli streets. It could have been a more limited investment if we revamped only our part of the sidewalk but we wanted to finance a bigger portion, also to help the local municipality. These kind of operations, which we did also in Milan in the past, apply pressure to nearby retailers, too, overall elevating the surrounding areas.”

The company, which most recently unveiled the remodeling of its Florence unit following an investment of 12.5 million euros, is additionally gearing up to reveal the revamp of its Roma Fiume location, scheduled for May. Designed by Franco Albini e Franca Helg in the ’60s, the building housing the store is undergoing a total revamp both in its spaces and facade, for a total investment of 40 million euros.

Previously, Rinascente also revamped its Milan flagship — the jewel in the crown of the retailer, which is owned by Thailand’s Central Group — with the restyling of the floors dedicated to women’s wear and the addition of a jewelry space. The Roma Tritone and Turin stores unveiled in 2017 and 2019 required an investment of 250 million euros and 20 million euros, respectively. 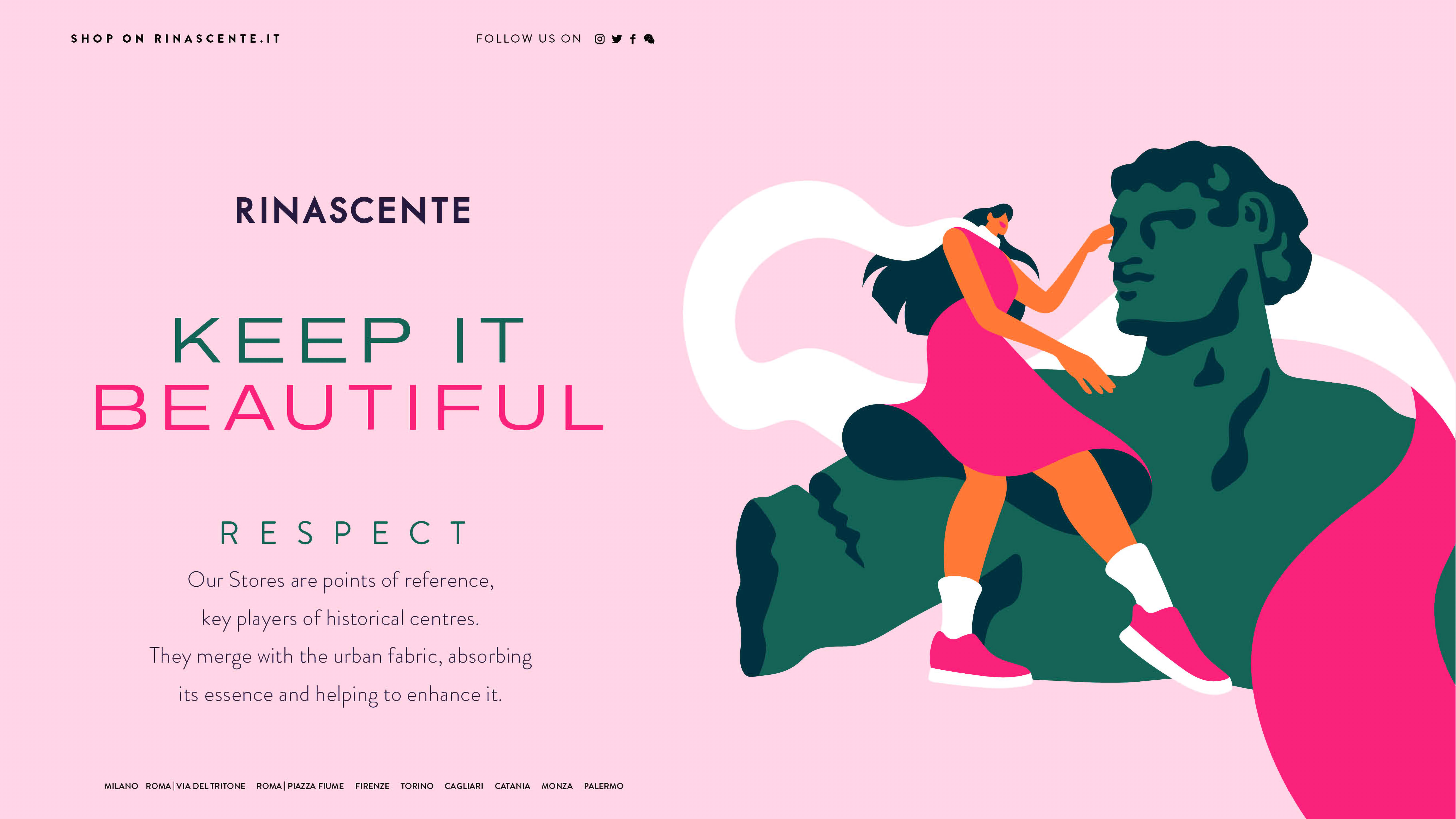 “We like to define ourselves as a collection of department stores rather than a chain, because each unit is unique in its design and offering,” said Cocchini. “And that’s why our second word is creativity. We intend this pillar both as what we demand from our collaborators and brands as well as what we try to bring from the technical point of view in the design and architecture of our locations.”

As for the term “emotion,” the executive underscored the importance of offering constant entertainment to consumers, becoming “a stage for unique experiences,” while he highlighted how research permeates every aspect of the retailer’s activity, encompassing scouting brands and trends to studying new ways to approach customers.

Finally, for “diversity,” Cocchini stressed that the department store is an inclusive, democratic spot by definition, where everybody is welcome to partake in the experience of shopping, having a coffee or just visiting the spaces.

Starting from the end of the month, the “Keep It Beautiful” campaign will be shared with the 2.5 million Rinascente card holders and appear in the stores, on the retailer’s web site and social media as well as in printed magazines. Cocchini said the promotional operations will continue for the upcoming two years.

While corporate investments continue, the store’s current activities are hampered by the seesawing regional restrictions imposed to limit the spread of COVID-19. Cocchini said Milan and Turin’s locations were the most affected by the ongoing closures while the impact was less significant in Rome. Overall, the performance in the first quarter was below expectations, which were based on a return of local consumers but eventually was hampered by both the closures and the delayed vaccination campaign in the country.

Launched last year after a 20-million-euro investment, the e-commerce site is helping to partly offset the losses, but it’s the on-demand service’s performance that has surprised Cocchini the most. Introduced four years ago, the service enables sales assistants to support customers’ shopping experience remotely via WhatsApp messages and accounted for over 10 million sales in 2020.

Without disclosing exact figures, Cocchini confirmed that Rinascente closed 2020 with sales down between 30 and 40 percent compared to the previous year, when it registered revenues of 800 million euros and reported double-digit growth compared to 2018.