Home » Education » Academic freedom is precious – so why have UK universities sold out to China?

Academic freedom is precious – so why have UK universities sold out to China?

In February 1970, students occupying the registry at Warwick University discovered dozens of incriminating documents. The university, at the behest of the business interests that dominated its governing council, was apparently spying on its lecturers and students and keeping files on their political activities.

Among the targets was Prof David Montgomery, one of America’s most distinguished labour historians, then a visiting professor at Warwick. When he addressed Coventry Labour party, the legal adviser and security officer at Rootes Motors, one of the young university’s biggest backers, attended the meeting and reported to the university authorities. Montgomery, they wrote, “revealed a definite bias against employers” and “most likely” would “exhibit a similar bias” in university lectures, exposing students “to a most undesirable indoctrination”.

The revelations caused a nationwide storm. Within days, students across the country held sit-ins, demanding that universities open any personal files held on them. Penguin rushed out a book called Warwick University Ltd: industry, management and the universities. Its editor, the Warwick history professor EP Thompson, said the university had forged a “subordinate relationship with industrial capitalism”.

In those days universities received nearly all their money from public funds; even overseas students were heavily subsidised. But Warwick, founded in 1965 and nicknamed “the business university”, deliberately adopted a more entrepreneurial approach. Several professors were sponsored by big companies, such as Barclays bank, Volkswagen and Pressed Steel. Unusually, nearly 15% of Warwick’s income came from private sources.

Today every university operates as a business, making its living in a globalised marketplace. Every university has remodelled its governing bodies along corporate lines. Every university gets most of its income from private sources. Paradoxically, every university is also, mainly through the funding agencies and their “quality” indicators, subject to a degree of state control that would have been unthinkable 50 years ago.

As Roger Brown, former vice-chancellor of Southampton Solent University and co-author of Everything for Sale (2013), has observed, markets are normally seen to need less state regulation while “in higher education they are seen to need more”.

The extent of regulation by the UK state is a legitimate subject for debate. So, indeed, is the extent of British industry’s involvement with universities. Influence from foreign companies and foreign states is a different matter, and you don’t need to be a xenophobe to think so.

In recent years, concerns have occasionally emerged about normal academic processes being compromised to protect university income. In 2014, for example, the University of Bedfordshire was accused of bending its rules to allow students sponsored by the Saudi Arabian government to retake an exam three times. But the benefit of a market is supposedly that, if one source of income asks for special favours, you tell it to get lost and you find another. 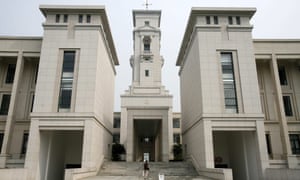 In the past few years, however, the situation has changed dramatically. A single source of income has become so important that its loss could spell financial disaster for at least a dozen leading UK universities. That source is China. And China is an authoritarian state that controls not only its leading companies but also, in large measure, the behaviour of its citizens.

In welcoming whatever custom they can get from China, universities are doing what the rules of the higher education market demand. They also have sound academic reasons for collaborating with a country that is increasingly at the forefront of research, particularly in the sciences. Unfortunately, China does not play by what are generally understood as market rules. Still less does it accept the practices of disinterested and dispassionate academic inquiry to which British universities still try to cling, if less tenaciously than they once did.

If you want proof of that, read a document approved by the ruling Chinese communist party congress in 2013. It was secret but translations are available. “We must … allow absolutely no opportunity or outlets for incorrect thinking or viewpoints,” the document states. It explicitly rejects western concepts of civil society and universal values.

China doesn’t believe that knowledge, particularly in the social sciences, should be pursued for its own sake. The goal, as Exeter University’s Catherine Owen, a politics specialist who speaks Mandarin, told the Commons foreign affairs committee last year, is “to promote social harmony and advance the government’s vision of social and economic development”.

The figures for UK universities’ growing dependence on China are laid out in a report last month from the rightwing thinktank Onward. In 2018-19, 120,385 students came from China (excluding those from Hong Kong), a 34% increase in five years and triple the number in 2006-07. The next largest overseas intake was the 26,685 students from India. France and Germany accounted for fewer than 14,000 each. Our universities have more than twice as many full-time students from China as they have from the north-east of England.

Fee income from Chinese students for 2018-19 was £2.1bn, more than 10% of the total. But at some universities, including Liverpool, Glasgow, Sheffield, Manchester, UCL and Imperial College, Chinese students provided more than a quarter of the fee income.

UK universities accused of overreliance on fees from Chinese students

The relationship between UK universities and China doesn’t stop there. Liverpool and Nottingham both have campuses in China. Cambridge has a Chong Hua professorship in development studies, endowed with £3.7m from a charity controlled by the family of a former Chinese prime minister. Jesus College, Cambridge, has accepted funding from Chinese sources for its China Centre. At least 10 UK university laboratories depend on significant investment from Chinese defence firms.

China is the UK’s third most important research partner. In 2018, UK researchers published 14,763 papers co-authored with Chinese researchers, some of them partly financed by the Huawei company, which the government now regards as too close to the Chinese state to be trusted with helping to build the UK’s 5G network.

About 500 Chinese military scientists have spent time at British universities in the past decade, working on technologies linked to missiles, supercomputers and jet aircraft. GCHQ has warned universities about “hostile state actors” trying “to steal personal data, research data and intellectual property”.

These are just a few examples we know about. As the Onward thinktank notes, UK universities aren’t always transparent about their funding sources. For example, Bristol refused to reveal details of funding for a five-year internet research project lest it lead to the sponsors’ withdrawal and “hamper the ability to win future research funds”. As for spying, the Chinese embassy, it is alleged, routinely keeps tabs on the country’s UK students.

Fifty years after the Warwick scandal, it’s not lefty students but Tory MPs and thinktanks and rightwing papers such as the Telegraph – always eager to find reds under the bed – who warn of the dangers of UK universities’ links to China. Their focus is on security and censorship risks and they quote evidence of Chinese pressure to prevent sensitive subjects such as Taiwan, Tibet, the Uighur Muslims, Tiananmen Square and civil rights in Hong Kong being discussed on UK campuses.

Some of this may be scaremongering. But academic freedom is precious and fragile. Just as the young Warwick University, in its anxiety to establish itself, laid itself open to interference from illiberal industrialists, so now some of our most prestigious universities, in their anxiety to succeed in the global marketplace, have become sitting ducks for an illiberal state.

The coronavirus pandemic already threatens the continued flow of Chinese students to the UK, with possibly ruinous consequences for some top universities. But if relations between the UK and China worsen, China could order a boycott of higher education in the UK, as it has already done in Taiwan and threatened in Australia. The Tories, who like to think of themselves as the guardians of national security and independence, could find their marketisation policies blowing up in their faces.