Headteachers in England are accusing the government of breaking its promise to reimburse them for food costs, and parents are complaining that some caterers are letting down the poorest children, while nutrition experts have called for a children’s food commission.

Chris Dyson, head of Parklands primary, in Leeds, has approached food wholesalers and joined forces with the logistics company Dennis Distribution, to ensure “no one in our school would go hungry”. Families are getting two hampers worth £70 a week with essentials such as bread, cheese and ham.

Meanwhile, in Cambridge, parents protested when a catering company gave 10 and 11-year-olds who had returned to school “tiny and unappetising” cut-price lunchboxes that “would hardly satisfy a toddler”.

And in Bristol, headteachers sent out their own food hampers after one of the biggest caterers in the country packed theirs full of crisps, chocolate biscuits and cheap white bread.

In the first few weeks of lockdown, the government’s voucher scheme, run by the employee incentives scheme firm Edenred, caused an outcry because of delays in delivering the vouchers to families. Angry headteachers now say new rules on the types of expenditure that can be claimed, published retrospectively, mean their schools could lose out if they did not use the official Edenred system.

A school in Nottingham stands to lose thousands of pounds because the government pledged in April to fund food and vouchers delivered during the Easter and May half-term but published revised guidance for exceptional costs last week, changing the criteria.

David Phillips, head of Chilwell school, where 11% of pupils are eligible for free dinners, says: “I’m fuming, really angry at this latest U-turn, because I even went to the lengths of getting our local MP to confirm in writing that we would get back what we spent.” His school gave up on the official Edenred scheme after two weeks because, he says, it was not working properly, and moved to a different voucher provider.

The new rules say schools can be reimbursed for holiday expenses only if they used the official scheme or are in an area without a supermarket that accepts them, neither of which applies to Chilwell.

Last week a catering company that supplies more than 400 schools and colleges, and says it provides “fresh, healthy, nutritious” meals, apologised for the low standard of its lunchboxes given to year 6 children, aged 10 and 11.

Mike James (not his real name), a single parent whose son is on free school meals, was so shocked he photographed the food and sent the picture to his son’s headteacher. 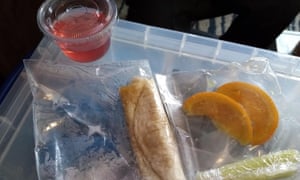 “When I saw what they thought was adequate for a lunch box I was lost for words. It was minute – a tiny cheese wrap not much longer than an AA battery, a small tub of jelly just a quarter full, two segments of orange, two small sticks of cucumber and no drink. There was no way it was enough to feed my son – it was hardly enough for a toddler,” says James, whose son attends Fawcett primary in Cambridge.

Parents whose children do not qualify for free school meals pay £2.20 for the lunchboxes. Another parent says: “I think they are about half the calories they need and whilst they nod in the direction of food rules by having fresh food it is just not enough for a growing child. How dare they, at a time when the nation is pulling together, short-change some of the most vulnerable people?”

The company, Alliance in Partnership (AIP), based in the West Midlands, which has been awarded the top “gold” Food for Life award, has apologised that its offer did not meet its “usual high standards” and last week changed the meals so they have “larger portion sizes, whole fruit and homemade cake”. The school said it had raised concerns with AIP and these were being addressed.

When schools reopened the government said they should return to using their pre-lockdown caterers, if possible. “But we could see nutritional standards going out through the door for many catering companies, especially the big ones, so we in Bristol have gone back to vouchers and providing food ourselves,” he says.

All school food provided by caterers, including lunchboxes, is supposed to comply with nutritional standards laid down by 2014 regulations and updated with healthy eating advice for governing bodies in March 2019.

But, according to the school food campaigner Andy Jolley, a school governor in Dorset, the standards are “blatantly ignored”, despite having legal force. “The regulations are not that great and not that practical. Emphasis is more on food groups than cutting down on salt and sugar. Standards are ignored because what gets monitored gets done, and the government decided against having anyone to check up on compliance,” he says.

The Food Foundation, the charity campaigning to ensure everyone can afford and access a healthy diet, is calling on the government to set up a Children’s Right to Food commission and says studies have shown nearly two-thirds – 60% – of secondary schools fail to comply with the nutritional standards.

Anna Taylor, its executive director, says: “Since the start of the coronavirus epidemic an extra 3 million people have signed up for universal credits and the number of children eligible for free school meals has grown. So it is all the more important that these programmes deliver bangs for bucks and protect children’s health as they grow up. One of the commission’s first tasks would be to design and test an approach to school food monitoring.”

Back in Leeds, Dyson waited last Friday for a delivery of 14,000 bags of Whitby Seafoods frozen fish, including calamari and scampi, describing himself as “a cross between Del Boy and Arthur Daley”.

“When the lockdown started I pledged that no one in our school would go hungry and went direct to the food wholesalers and opened up passages for bread, potatoes, veg to come straight into school,” he says. “Now we have so much food we are sharing it with other schools in Leeds and now a few schools in Bradford as well.

“A huge articulated lorry pulled up packed to the brim with 19 tonnes of frozen food from McCains UK. We had just three hours to move 35,000 meals before they thawed.”

The plan was accomplished with staff from Leeds council and the Real Junk Food Project, a forklift truck from the Mansfield Group and 89 vans. “With the Magic Breakfast charity I am currently getting 1,000 tins of baked beans a week, 1,000 boxes of cereals, 1,000 packs of oats and 1,000 bottles of fruit juice that we distribute,” he says.

Asked whether Chilwell school would be able to claim back its food costs despite using a different voucher provider, a spokesperson for the Department for Education was unable to clarify the situation. “We know this is a unique and challenging period, which is why we’re taking unprecedented action to make sure no child goes hungry. As of 24 June, over £183m has been redeemed in Edenred vouchers by families and schools through our national voucher scheme.

“Where a school has used an alternative voucher scheme because they were unable to use Edenred at any time, for example where these vouchers could not be used in local supermarkets, they can claim this back.”