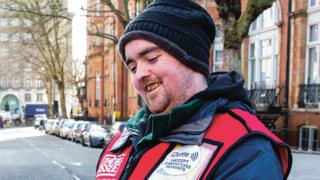 Giving rough sleepers rooms in hotels should lead to a significant long-term reduction in rough sleeping after the coronavirus outbreak, says a charity for homeless people.

Around 2,000 people have been brought in off the streets in England and put into Travelodges and budget hotels.

St Mungo’s charity says it is an unprecedented opportunity to stop people returning to the street.

“Out of something awful, something positive has come,” said Mr Sinclair, whose charity has helped to house rough sleepers in hotels, protecting them and preventing the spread of the coronavirus.

He says it unexpectedly created a huge opportunity to assess the needs of people suddenly taken off the streets, allowing charity workers to look for accommodation and provide support for mental health problems or addictions.

Mr Sinclair says this could “change the landscape” in terms of reducing the long-term numbers of rough sleepers.

He says there are still rough sleepers who have avoided being brought under a roof.

But he is confident that this mass-scale intervention will make a “significant dent” in how many will return to the streets.

The Ministry of Housing, Communities and Local Government says 90% of rough sleepers in England have been invited to come indoors during the coronavirus outbreak.

The opportunity followed the collapse in the tourist industry during the lockdown measures, which left many hotels empty.

The government and local authorities paid for hotel rooms to house rough sleepers, who could not be left on the streets during the pandemic, either as a risk to themselves or the wider community.

Mr Sinclair says the average life expectancy for someone living on the streets is 45 – and that the ill-health of rough sleepers made them highly vulnerable to the coronavirus.

The biggest number of people being put up in hotels or other temporary accommodation is in London – but there are also people in Bristol, Brighton, Reading, Oxford and Bournemouth.

Charities such as St Mungo’s are providing staff in hotels – in which drug use is banned and alcohol discouraged, with the temporary residents getting their own room, meals and laundry.

“I’m grateful, more than anything,” says Kris, who is staying in a hotel near Paddington, west London.

He says it can be lonely being stuck in a hotel room for 23 hours a day for weeks at a time, but he is being well-treated and he hopes it will be “a great opportunity to get something permanent”.

“What’s going round in my mind is the uncertainty of what happens next,” he says. But for the moment he has the security of being indoors.

He usually sells the Big Issue and says he misses his customers and the social life outside, as the magazine has had to stop sales on the streets.

Lord Bird, founder of the Big Issue, says putting homeless people into empty hotels has become a chance to get to grips with rough sleeping.

“We believe very strongly it’s an opportunity to move people indoors – and that it’s something that should become permanent.”

He says there is an irony that attitudes towards rough sleepers have “gone from utter neglect from the authorities to saying you matter because of fear of spreading the virus”.

But he warns “not to expect a happy-ever-after” outcome – as people living on the streets will have many complex problems from “decades of neglect” and might not find it easy to be kept alone indoors.

“The streets have been turned into a theatre of social collapse,” says Lord Bird, whose magazine is now being sold in supermarkets and online.

Dave, who has been homeless for 15 years, has been put up in a flat in Dawlish in Devon.

He misses the outdoors and the sounds of sleeping by the sea, but says he has adapted to the indoor life.

With a roof over his head, he is thinking of volunteering for the NHS.

“The extra security is nice,” Dave says, and he thinks it will help homeless people who were at risk from “undesirables” who might prey on them.

“A lot of vulnerable people on the streets will be away from that now. It’s great.

“It raises a few questions about why they couldn’t do it before,” he says.

A spokeswoman for the Ministry of Housing, Communities and Local Government said there had been a “massive collaborative effort across government, local authorities, health providers and charities – backed by £1.6bn of government funding to help councils respond to coronavirus”.

She said the scheme for rough sleepers would ensure “some of the most vulnerable in society are protected from the pandemic. We’re also helping vital services, such as mental health or drug and alcohol addiction support, to remain open”.