“It’s really upsetting because we don’t want to have to do this,” Liam*, a student at the University of Sussex, says.

First-year Liam wants to see changes and, like others at leading universities including Manchester, Bristol, Oxford and Goldsmiths, he is planning on withholding his rent to get his point across.

Rent strike groups across the country have called for rent reductions and greater flexibility around leaving accommodation this year, after the pandemic pushed classes online, sent thousands into self-isolation and introduced restrictions onto campus.

While students tell The Independent about their different reasons for striking, they all seem to agree on one thing: this year has not been normal, and should not be treated as such. 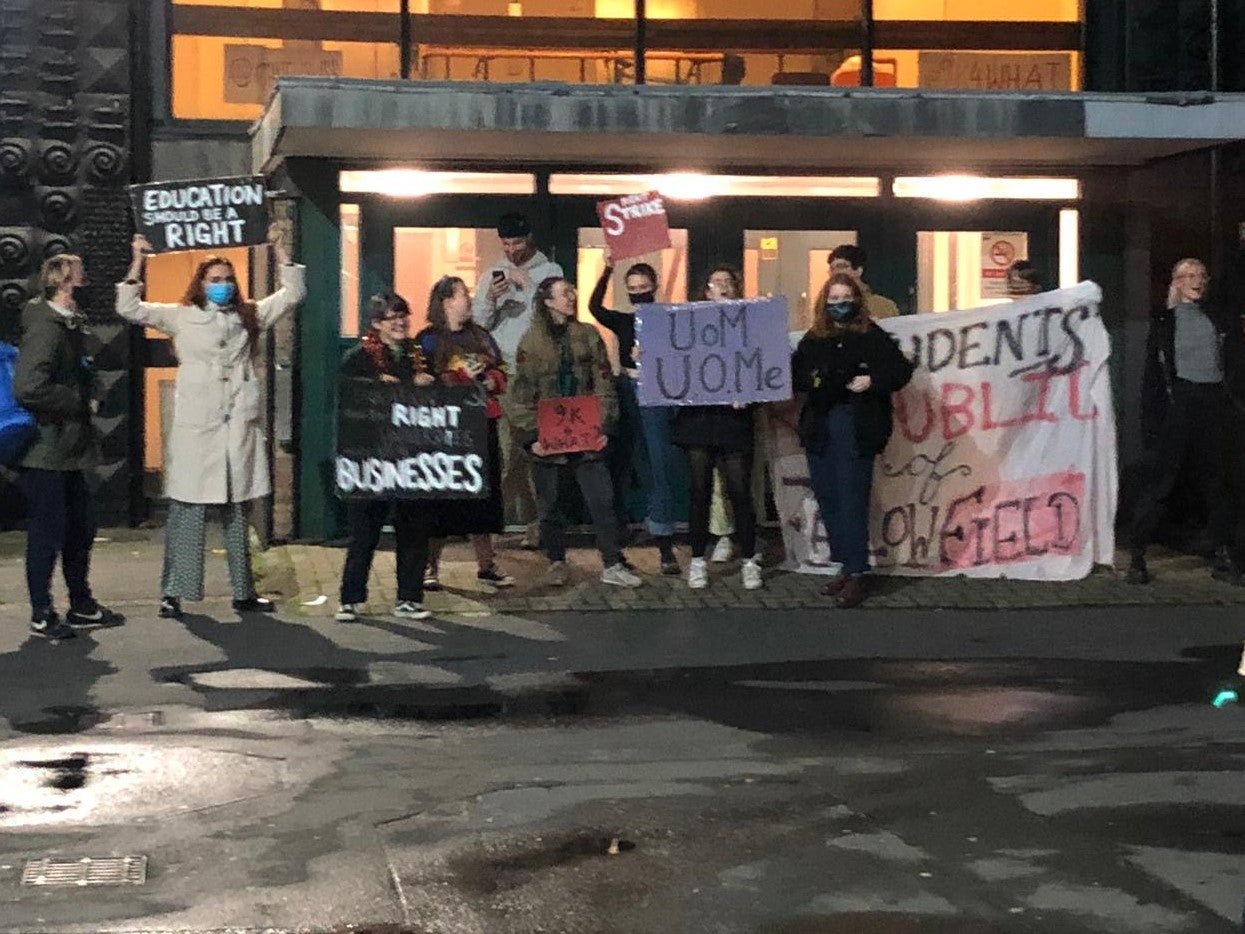 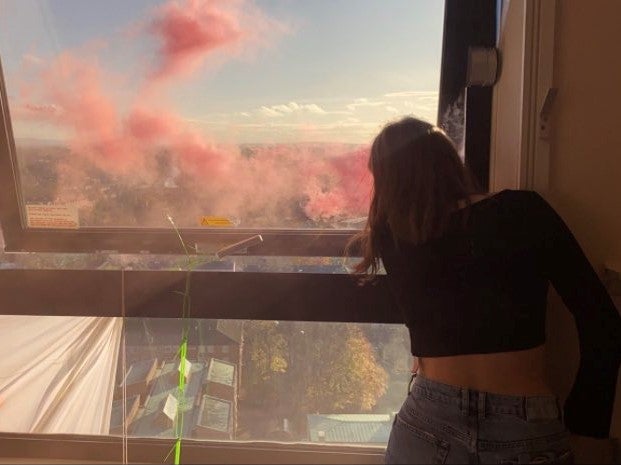 “Lots of us were promised online and in-person learning,” Liam tells The Independent, referring to the blended learning approach adopted during the pandemic.

“But the truth of the of the matter is, very few of us have any in-person teaching time at all.”

As well as a 40 per cent reduction in rent in university halls, the Sussex group is calling for students to be allowed to leave accommodation contracts without receiving a penalty. “Lots of us could be doing this work at home,” Liam says.

For Ana Stockton at the University of Bristol, her decision to strike over rent started when she began feeling “a little bit cheated” about paying the same tuition fees as other years, while much of her course was online.

“I wanted to find an outlet to try to raise that I wasn’t very happy,” the University of Bristol student tells The Independent. “The rent strike felt like the perfect opportunity for me to be like: ‘This isn’t really very fair – we are getting a very different experience but being charged the same’.”

However, as term went on, she says communal areas – such as study spaces  – in her accommodation stayed shut as a Covid precaution, her whole flat caught coronavirus, and she was disappointed with a self-isolation support box, which contained no fresh food. 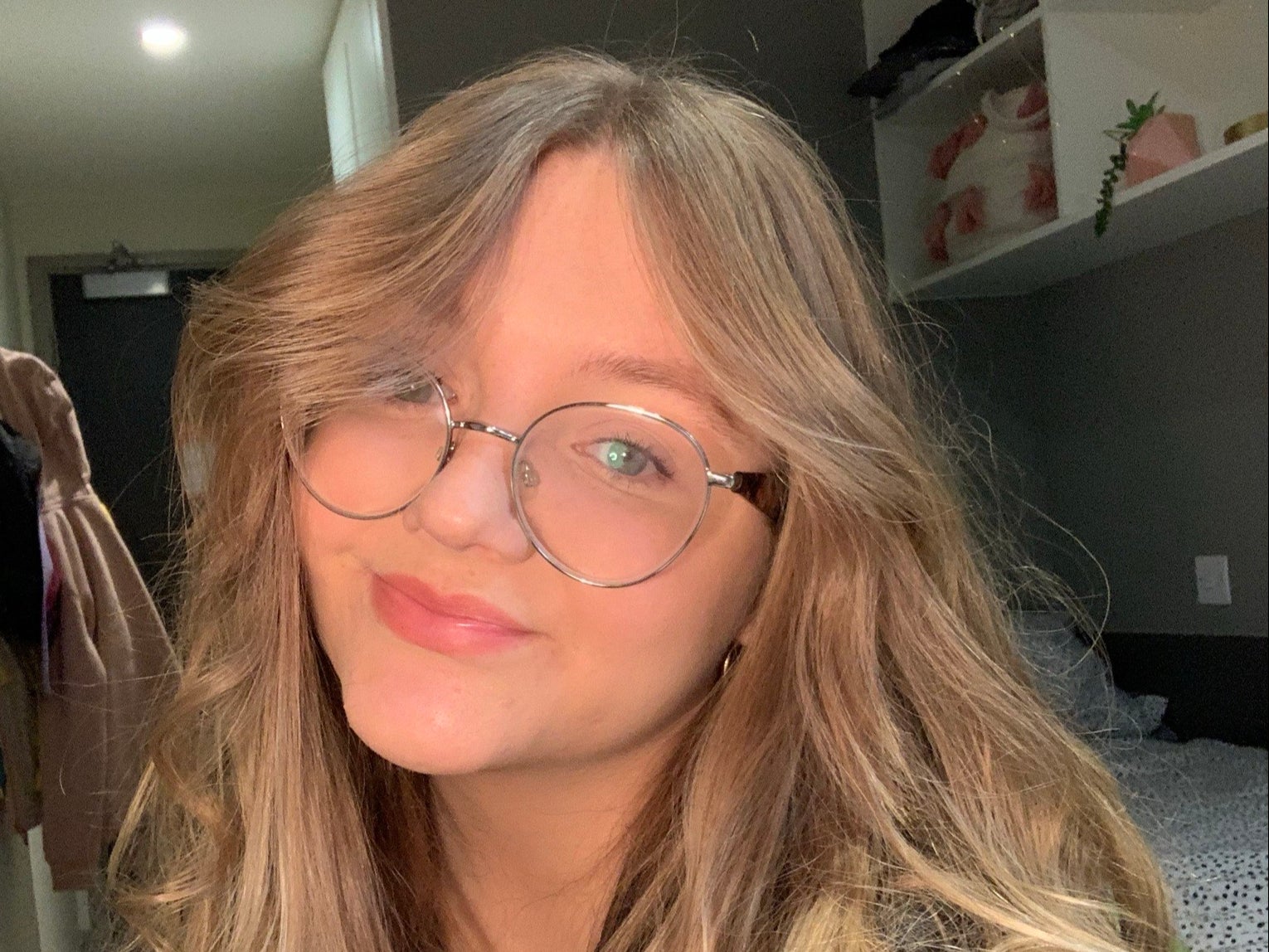 “It started off as a tuition thing,” Stockton tells The Independent, saying she withheld her rent as she could not do so with her fees. “But then I guess I got more and more angry at the fact that we were getting the short straw for the same amount of money.”

Saranya Thambirajah, another student who recently started at the University of Bristol, says the strike was about feeling sold “a very unrealistic promise” of what to expect, which included blended learning turning out to be “overwhelmingly online” – as well as a call for more student support.

Similarly, Liam says the Sussex rent strike is over more issues than just online teaching, with claims of accommodation issues not being fixed quickly enough, and self-isolation packs being too expensive.

A University of Sussex spokersperson says in the “rare” occassions issues are not “swiftly taken in hand”, the university works closely with students to offer them alternative accomodation or facilities. Self-isolating students have been offered a “comprehensive package of support” such as money for food, and free laundry and cleaning supplies, they said.

Robert Kerse, the University of Bristol’s chief operating officer, says the university believes it has gone “above and beyond to provide supports to students during this stressful and challenging period”. It has always been clear about the plan to offer blended learning, he says.

Bristol students in university accomodation have been given a 10-day rebate over guidance to move teaching online in early December, as well as getting a 30 per cent off rent for seven weeks due to the staggered return in the new year.

Mr Kerse tells The Independent a new policy will also mean students will be able to leave their tenancy without receiving a penalty if it is better for their physical and mental health to not be in university accomodation.

The Bristol rent strike group are planning on continuing their strike and demanding a 30 per cent reduction off the whole year.

Further north, the University of Manchester docked 30 per cent off rent for last term following a rent strike – which saw some strikers even occupy a building in protest.

Strikers said they were unhappy about having less facilities on campus and finding out even more teaching would go online in response to local coronavirus cases shortly after moving to university.

When asked why he went on rent strike, Manchester student Barnaby Fournier says: “I think it was frustration at how different our university experience has been compared to every other year.” 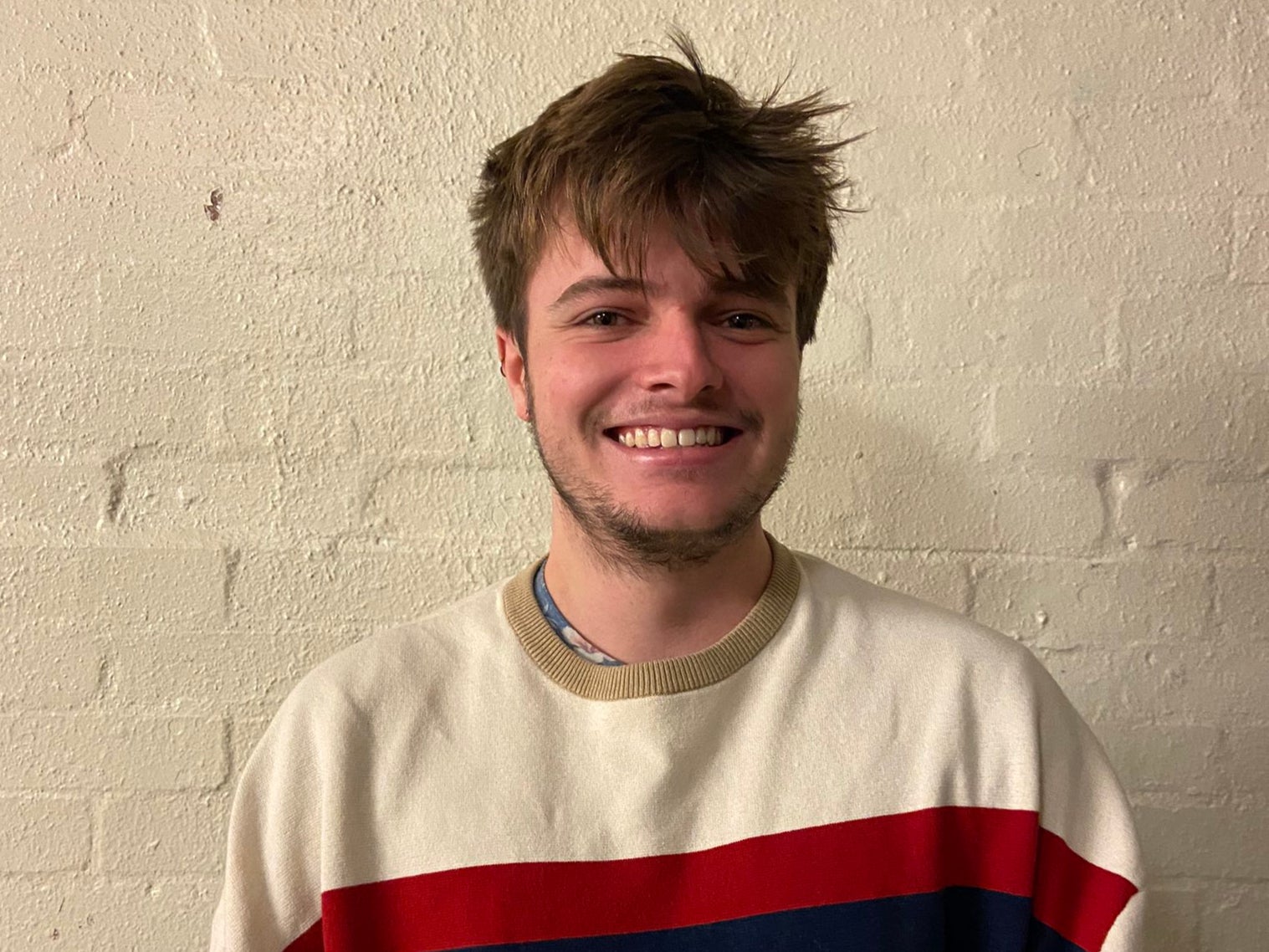 He claims he was paying more than someone he knew did for his same accommodation the year before, while having access to less facilities on campus – including a subsidised bar, common rooms and study spaces – because of closures linked to coronavirus.

But not anymore with the reduction, he adds.

As well as the money off rent, the university has promised to let students quit contracts at no penalty and to open up more study spaces on site.

Rent strikes are planned at other universities in the new year, such as Cambridge, Sussex and Goldsmiths, with strikers making similar requests.

University of Cambridge striker Gina** says students are demanding rent to be slashed by around one third this year as “a lot of students are really struggling financially, and yet the university and has not made any concessions”. 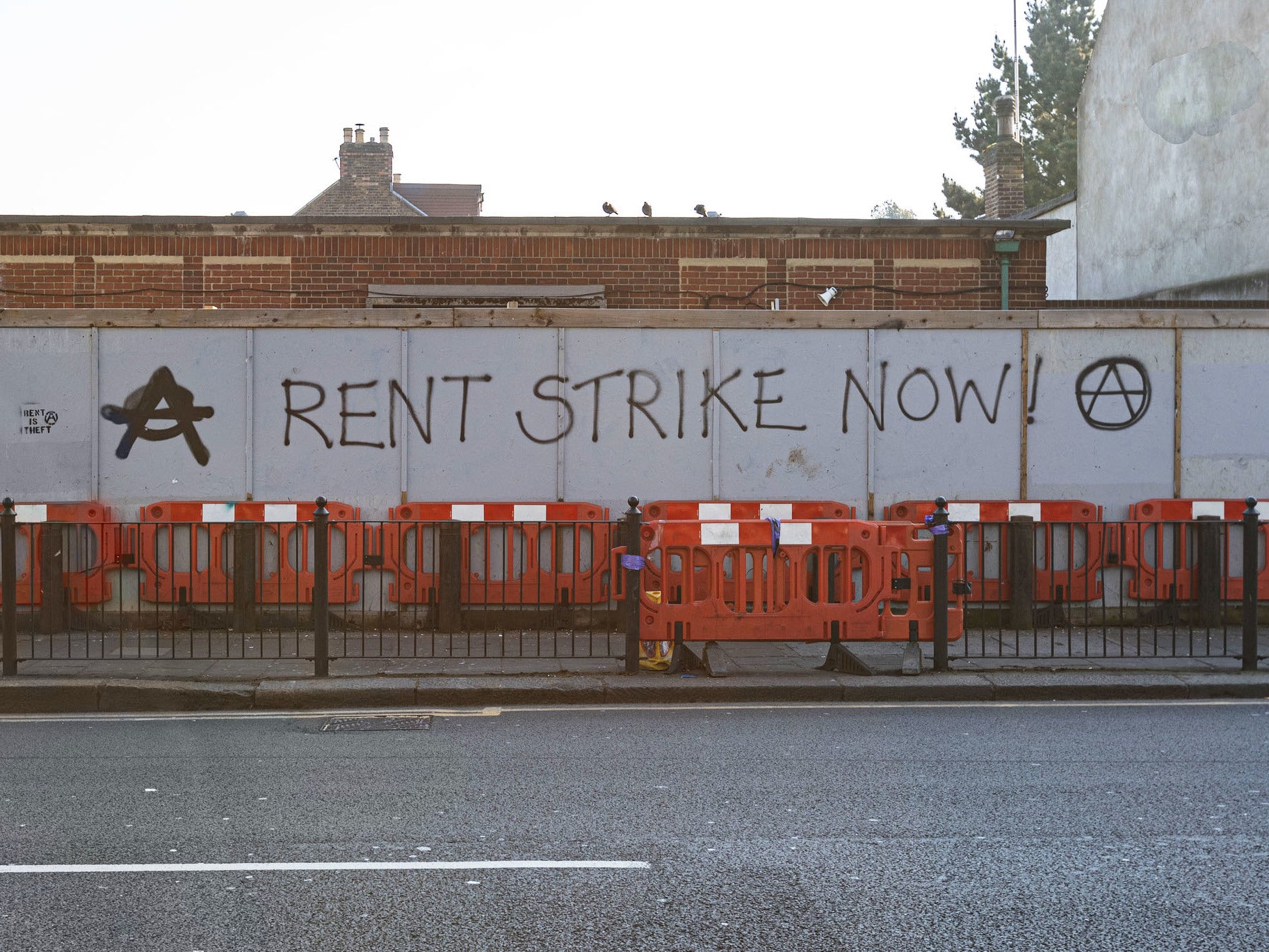 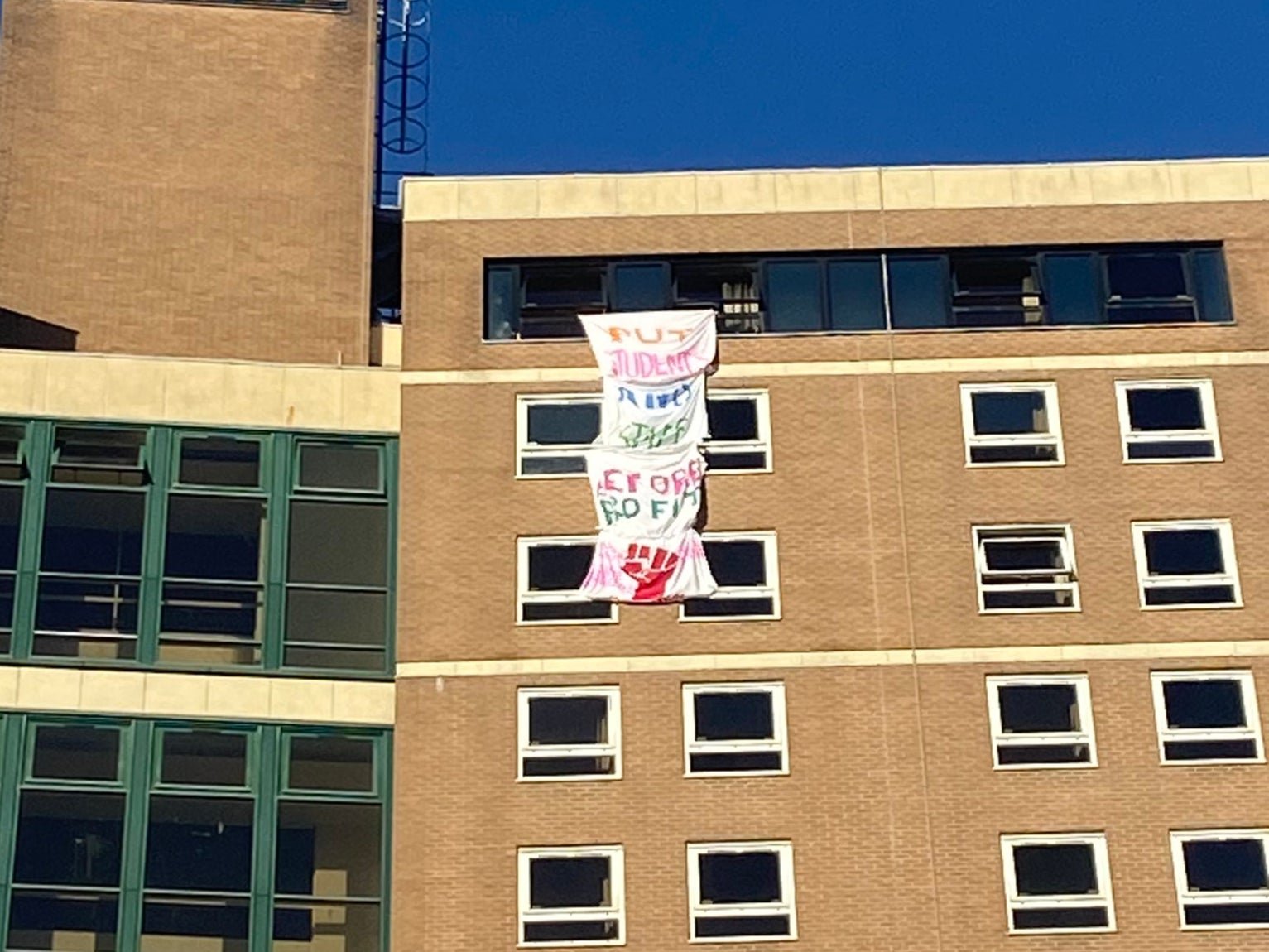 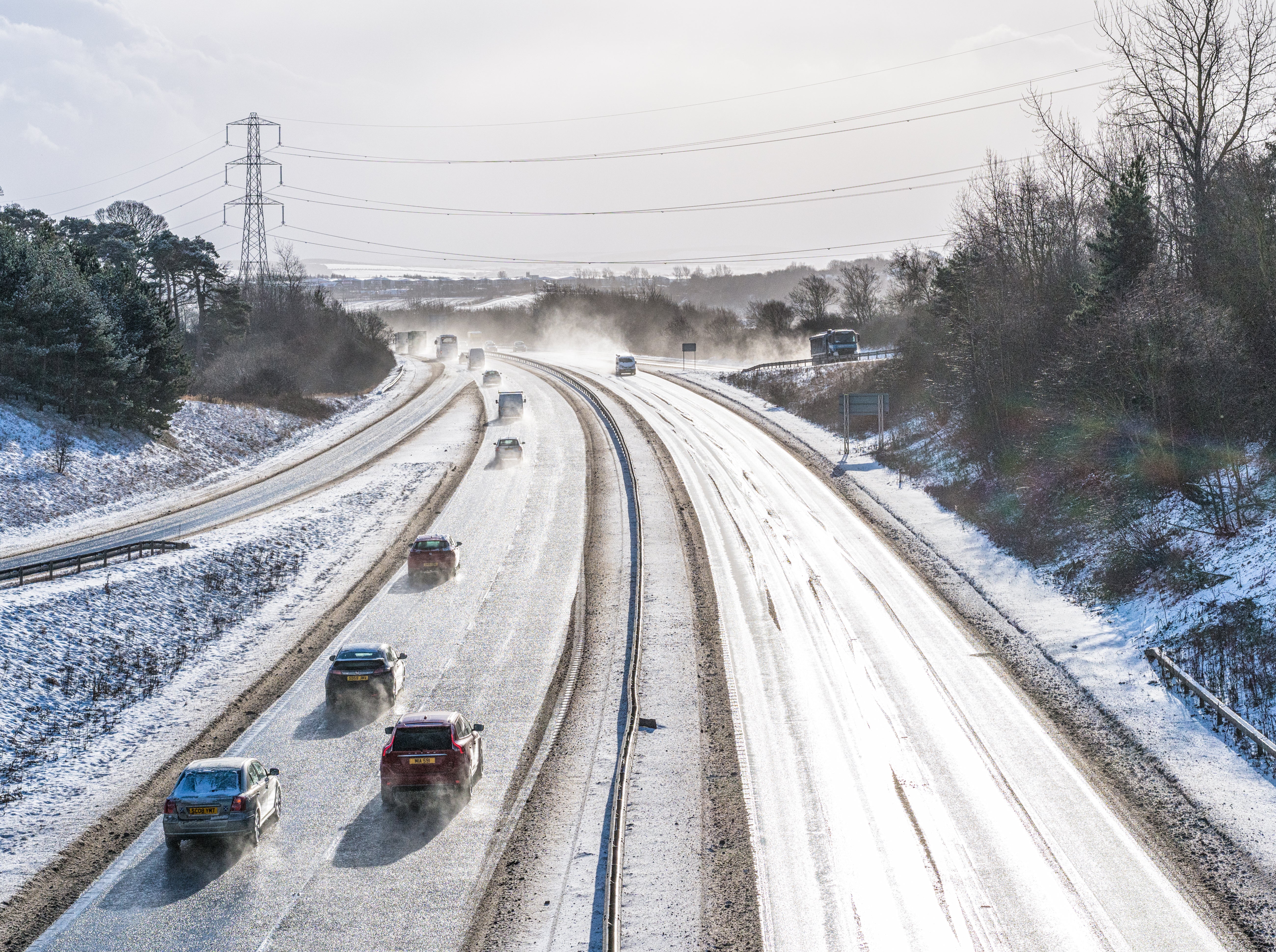 Meanwhile John* says he has decided to join the strike as he felt the pandemic showed the university to “be focussing on their finances rather than student welfare”.

“A lot of students were made to move back when most of their course has been online,” he tells The Independent. For him, it has been entirely online, and he had not been to his department when we spoke at the end of November. But – he was living in college, paying around £160 a week in rent.

The Cambridge rent strike group are demanding a 30 per cent rent cut this year, followed by a 10 per cent one in future, no staff redundancies due to Covid and to let all students study remotely if they wish to, calling for an end to the rule of “keeping term”.

Full-time students are required to “keep terms of residence” in Cambridge, which means undergraduate students must live within three miles of Great St Mary’s church in the city, in college or in other accomodation with college permission during term time, according to the university.

Trying to get permission to leave is “quite an extensive process”,  John says, and is done on a college-by-college basis, meaning there is “no formal unified process for all students that can be clearly advertised or clearly pointed out”.

“A lot of freshers are just feeling extremely isolated and would really like the chance to be able to work at home,” fellow striker Gina says.

It is not the first time students have gone on rent strike, with one at University College London over costly accommodation bills several years ago lasting for five months – and resulted in students declaring “victory”.

More than 300 students in private accomodation went on strike during the first lockdown – when many universities decided to waive rent, while many private providers did not.

For Thambirajah, a rent strike this time around seemed like the best way to make student concerns heard. 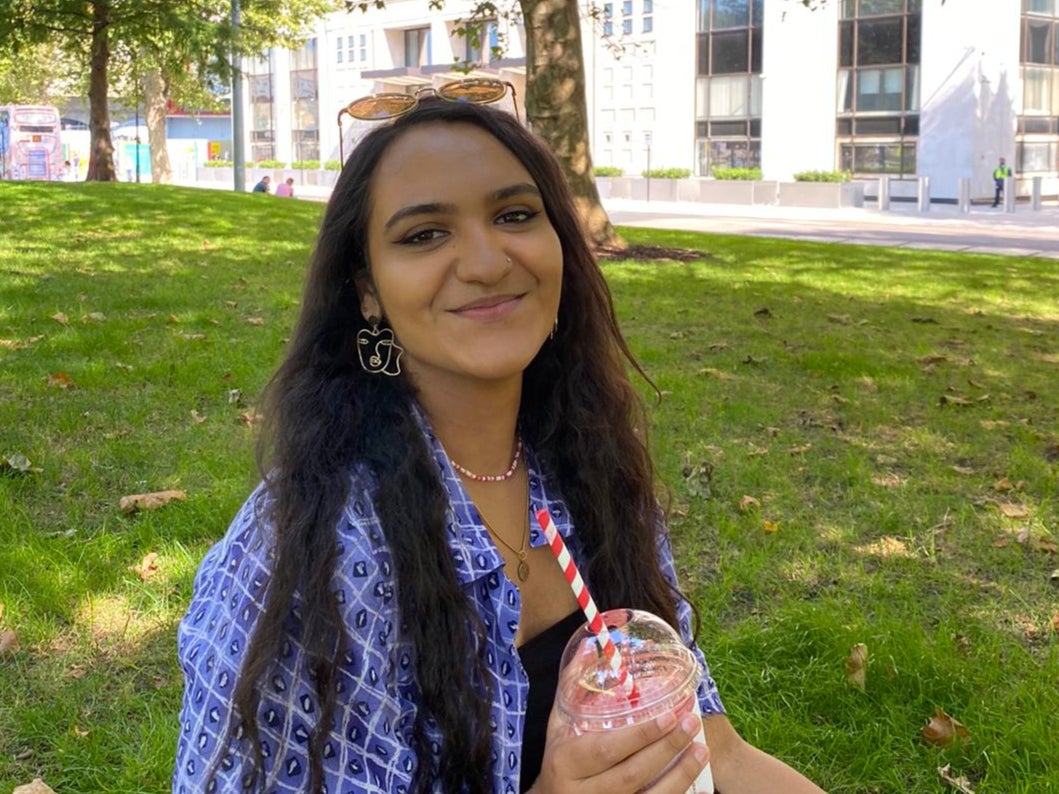 “It’s a collective action that hits the university financially – which is where we feel that they will care the most, because we felt that they put their financial concerns at the forefront,” she says. “It is a very direct and immediate way for students to show their concerns, to get their voices heard, and to get the uni to listen them.”

Fournier at the University of Manchester says his campus has a “massive community feeling”, which helped to organise the protest.

Meanwhile, Liam from the University of Sussex says: “I don’t think when anyone goes university, they particularly want to go on a rent strike. But I think for us, we’re angry.”

The University of Sussex rent strike group says they are “disappointed” at the lack of engagement from the university over the financial and welfare concerns of students, saying they feel “there are no other options to make their voices heard”.

Similarly, for John and Gina at Cambridge, they say they feel like concerns have been raised through official channels, to little or no result.

“It becomes a point where it’s been terrible how they haven’t been listening to students,” John says. “I rent striked to force them to listen.” 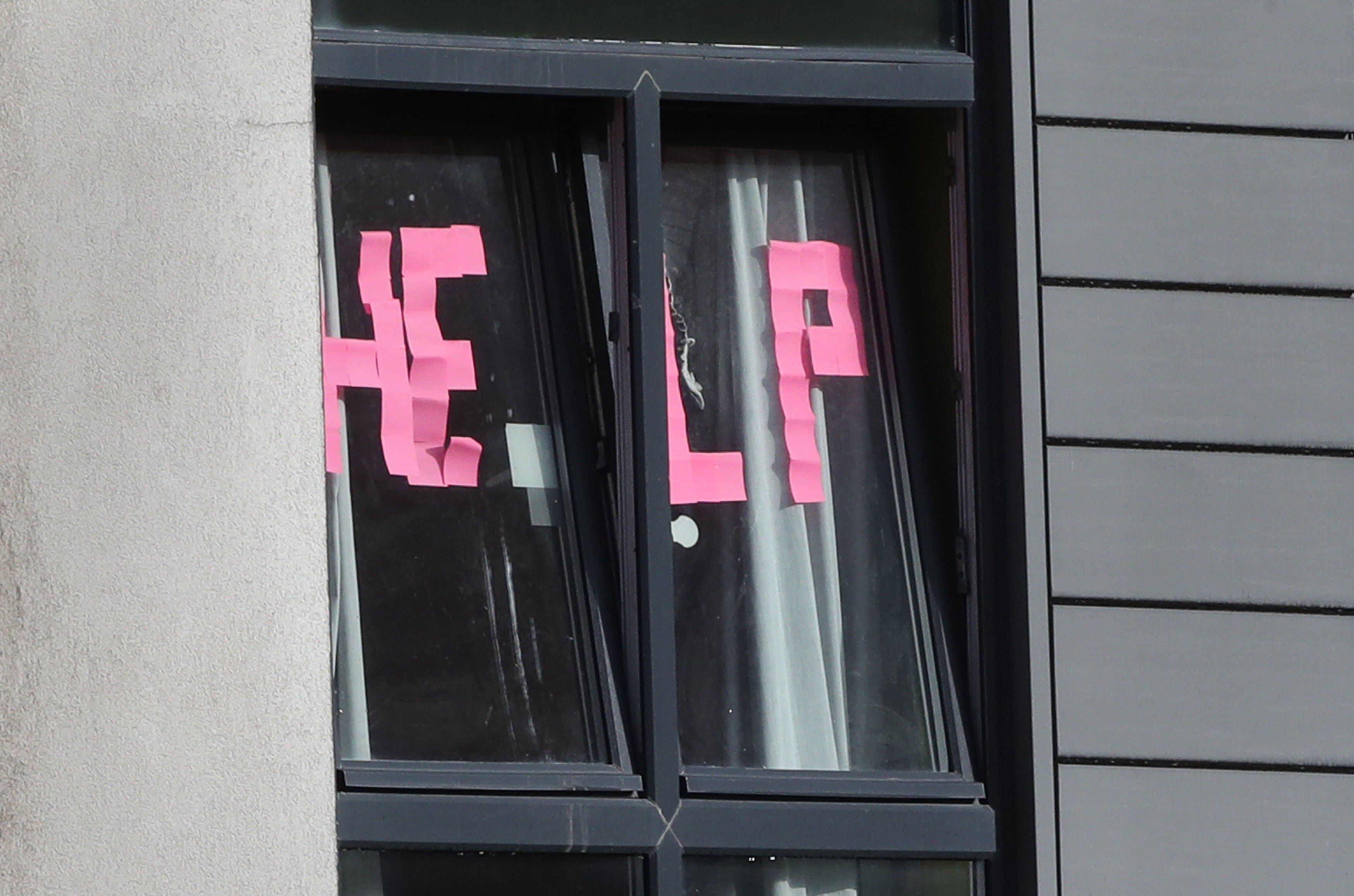 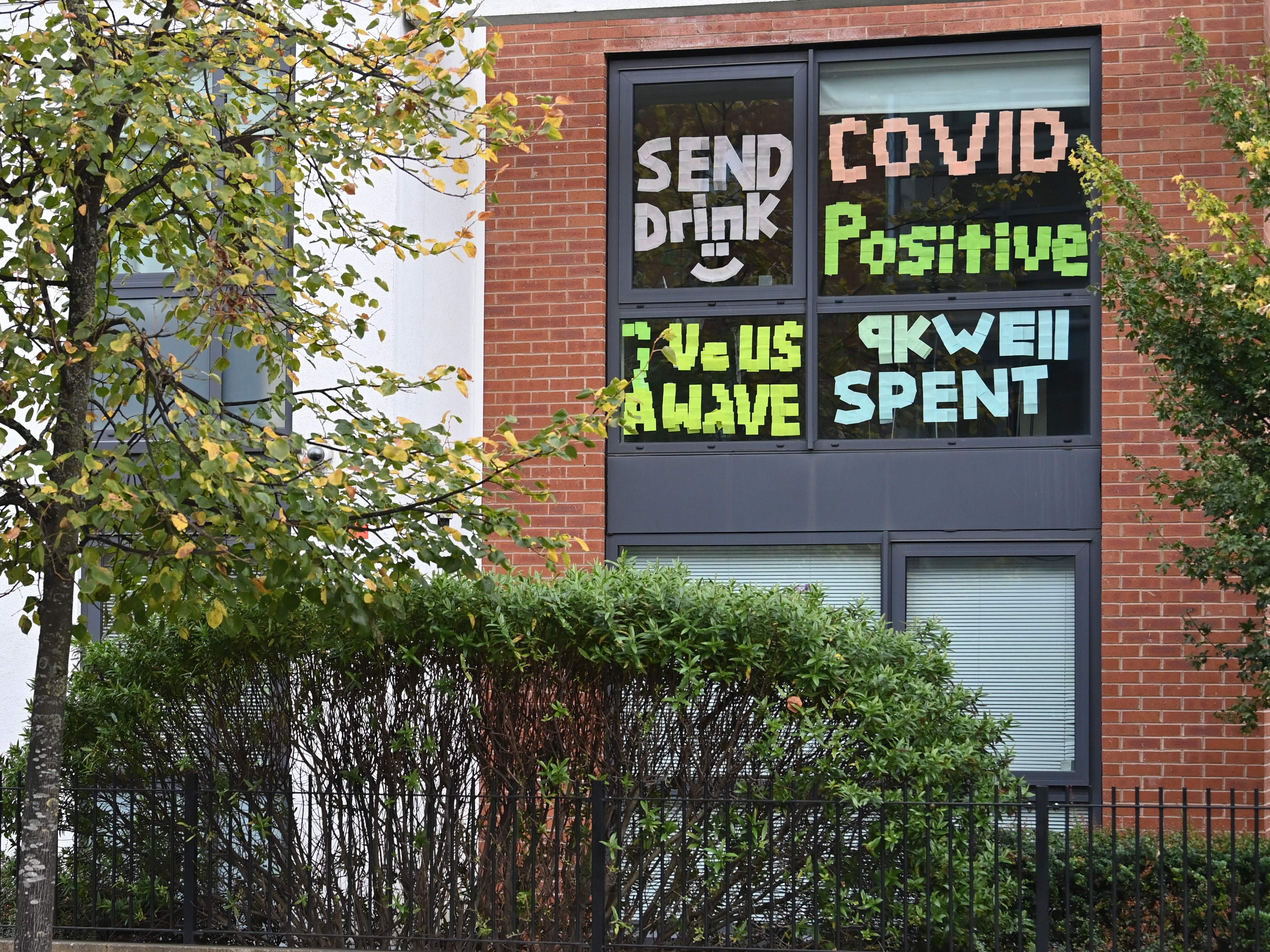 The University of Cambridge has been approached for comment.

“Our entire community has worked tirelessly since the start of the pandemic to provide our students with a high-quality blended learning experience and additional student support,” Mr Kerse from the University of Bristol says. “We have consistently done right by our students, acting reasonably and providing rental rebates when education has been moved wholly online as part of the government’s efforts to tackle the spread of Covid-19.“

A University of Manchester spokesperson said more teaching went online for some courses due to restrictions under coronavirus. “We very much hope that the current restrictions will reduce the rate of infection rate in Greater Manchester and that we can return to more normal activities as soon as we can,” they said. “Where feasible for their course, students have the option of studying either on campus or wholly remotely, and our accommodation pledge supports this.”