Home » Education » Vocational exams to be estimated grades and delays

Vocational exams to be estimated grades and delays 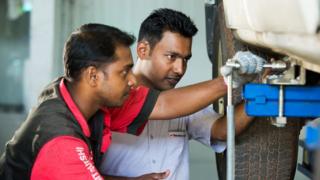 Vocational qualifications needed to get into further education or universities are likely to use estimated grades, says England’s exams watchdog.

But it says some qualifications that require a practical, hands-on test might have to be delayed.

Ofqual chief Sally Collier says where possible students should not be “prevented from progressing”.

The exams watchdog has published proposals for the awarding of vocational qualifications disrupted by the pandemic – with decisions to be taken after a two-week consultation.

There are 14,000 different qualifications and 160 awarding organisations – and Ofqual says it is too complex to provide the type of “one-size-fits-all”, standardised approach used for A-levels and GCSEs.

But qualifications, such as some BTecs, that are used for entry to further-education colleges or higher education will have an estimated grade, in line with the way that A-levels and GCSEs are being assessed this year.

Grades will be based on the evidence of assignments, modules or class work carried out during the course, before the lockdown stopped students attending classes.

That would give students time to make their applications for courses in the autumn – with the deadline for making decisions about choosing a university course being pushed back to mid-June this year.

But qualifications for practical, work-based skills could be delayed.

In the first instance, there will be an attempt to adapt assessments so they can be carried out online. But if that is not practical, tests would have to be deferred until they could be taken in person.

The watchdog said that, for example, a test in driving a fork-lift truck could not be carried out online, so that type of assessment would have to wait.

There will be qualifications which include both theoretical and practical tests – and for these the regulator says the awarding body will have to decide whether it “more closely aligns” with those trying to go on to another stage of education or is primarily for a practical workplace skill.

Plans for replacement grades for qualifications specific to Wales, Scotland and Northern Ireland will be subject to their own devolved regulators.

“It is vitally important that learners taking vocational or technical qualifications are not prevented from progressing in their studies or careers because of the unprecedented challenges this summer,” said Ms Collier.

David Hughes, chief executive of the Association of Colleges, said the proposals would “help to reassure students and colleges”.