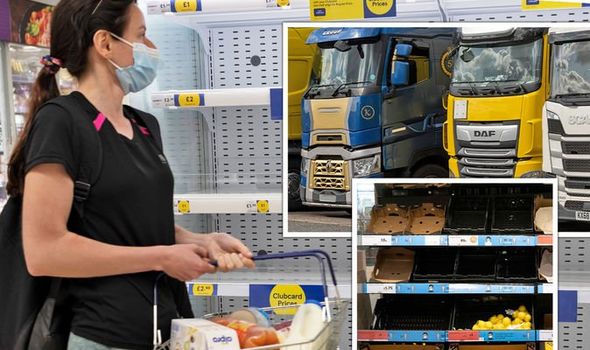 The issue has been raised by Tory backbencher Andrew Bridgen in a letter to Boris Johnson after warnings last year from a whistleblower that a downgrade of IT programmes at the Department for the Environment, Food and Rural Affairs (Defra) had left the UK exposed.

The Sunday Express revealed the concerns in February 2020 with senior civil servants at the department accused of being “happy to see the system fail” because they hated Brexit.

The whistleblower had warned that the downgrade would impact on 12 new competencies the department would have responsibility for once the UK left the EU.

This included the registration for lorries being allowed to cross the border and the goods they are carrying.

In his letter to the Prime Minister, Mr Bridgen said: “The concerns related to Defra awarding a contract to French company Capgemini, which the whistleblower, who has 20 years experience working for high level tech companies, warned were installing a system that could not cope with its then current responsibilities. This was before further responsibilities were transferred from the EU.

“The whistleblower believed much of the inaction in dealing with the issue was due to a belief amongst civil servants that we would not leave the EU following the referendum. This has led to a situation now where there are food shortages, much of which can be traced back to inadequate IT provision in Defra.

“When asked to respond in Feb 2020, Defra stated ‘the allegations are fundamentally untrue;’ and extensive preparations had been made.

“I am now informed that everything the Defra whistleblower predicted with regard to the failings of the Capgemini system have come to pass, with multiple system failures on a daily basis.

“This is leading to huge delays in issuing import and export licenses for food items. I believe that this is a major contributory factor in the shortfall of certain imported foodstuffs.

“This was in my opinion all avoidable.”

The shortage of food was highlighted by Nandos that they could not supply enough chicken for their restaurants and had to close down 25.

While supporters of the EU claimed that the problem was caused by Brexit and immigration controls reducing the number of HGV drivers, the truth, according to a whistleblower, is that problematic software at the Defra could be to blame.

Around 38 percent of chickens sold in the UK comes from the EU and instead, an insider has claimed, eight people have been trying to manually process paperwork for thousands of lorries which should be dealt with by a computer.

“We recently announced a package of measures to help tackle the HGV driver shortage, including plans to streamline the process for new drivers to gain their HGV licence and to increase the number of driving tests able to be conducted.

“However, most of the solutions are likely to be driven by industry, with progress already being made in testing and hiring, and a big push towards improving pay, working conditions and diversity.

“We want to see employers make long term investments in the UK domestic workforce instead of relying on labour from abroad and our Plan for Jobs is helping people across the country retrain, build new skills and get back into work.”