Biden’s Choice for Pentagon Faces Questions on Ties to Contractors

WASHINGTON — Three weeks ago, a Navy ship off Hawaii launched a military contractor’s experimental missile to successfully intercept and destroy for the first time in space a decoy pretending to be an incoming nuclear weapon.

The same company that helped pull off this feat, Raytheon Technologies, was picked this year for another contract for a program that could end up costing as much as $20 billion to build a new generation of nuclear-armed cruise missiles for the United States.

And Raytheon — whose 195,000 employees make fighter jet engines, weapons, high-tech sensors and dozens of other military products — spent the past several years selling billions of dollars’ worth of weapons and radar systems to allies in the Middle East, some of which were used to fight a war in Yemen.

Now Raytheon could soon have another point of distinction: a member of its board, retired Gen. Lloyd J. Austin III of the Army, has been named by President-elect Joseph R. Biden Jr. to be the next secretary of defense.

Raytheon is not General Austin’s only link to military contractors. He has also been a partner in an investment firm that has been buying small defense firms. And his move from the weapons business to a leadership role in the Pentagon continues a pattern begun by President Trump in recent years.

This is a departure from the norm. Defense secretaries who served before Mr. Trump’s tenure — at least three decades dating to the tenure of President George Bush — did not come directly from boards or executive suites of contractors, although some, like Ashton Carter, President Barack Obama’s last defense secretary, had served as industry consultants.

The decision by Mr. Biden to nominate General Austin has drawn a new wave of questions about the corporate ties of people Mr. Biden is choosing for his administration.

Those ties are especially relevant when it comes to the Pentagon, which spends hundreds of billions of dollars every year on weapons and other supplies. During Mr. Trump’s tenure, the military budget has increased about 15 percent, reaching $705 billion in the most recent fiscal year, one of the highest levels in constant dollars since World War II.

“It’s important for the secretary of defense to bring to that role an independence of thoughts, and it’s deeply concerning when any nominee is coming straight from one of the major military contractors,” said Daryl G. Kimball, the executive director of the Arms Control Association, which pushes to reduce nuclear weapons and military spending.

He added “Raytheon, I would note, has an enormous financial stake in upcoming decisions by the Biden administration, the Congress, the secretary of defense.”

Inside Raytheon, officials were said to excited by the prospect of a board member becoming defense secretary, according to a person who works with the company. But that person and another who works with Raytheon cautioned that the appointment could bring unwelcome scrutiny to the company.

Even members of Mr. Biden’s own party had urged Mr. Biden to stay away from nominating anyone for the defense secretary’s job who came directly from the world of military contractors.

“American national security should not be defined by the bottom lines of Boeing, General Dynamics and Raytheon,” Representative Mark Pocan, Democrat of Wisconsin, said last month in a statement.

As defense secretary, General Austin would need to sell any stock he hold in Raytheon or other defense contractors, or any companies that do business with the industry, and he would most likely be prohibited from directly taking part in any contracting decisions or any other “particular matter” that directly affects companies he had financial ties in the prior two years, if Mr. Biden follows ethics guidelines first adopted by Mr. Obama.

General Austin made his way onto the board of Raytheon Technologies by way of an April merger between Raytheon Company, best known as the maker of Patriot and Tomahawk missiles, and United Technologies, a manufacturer of commercial and military jet engines and aviation electronics, whose board General Austin joined in June 2016 after his retirement from the military.

Raytheon filings said that as of October, General Austin owned more than $500,000 of Raytheon stock. While a member of the United Technologies board, General Austin was paid a total of $1.4 million in stock and other compensation over four years.

Raytheon now ranks as one of the largest military contractors in the world, with Raytheon boasting in an earnings report to Wall Street that it has a record backlog of pending orders from the federal government totaling $73 billion. 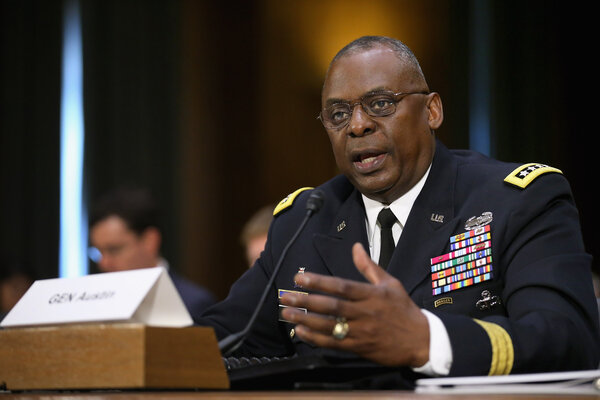 Its aggressive push in the past five years to sell billions of dollars in precision-guided bombs and bomb parts to Saudi Arabia and the United Arab Emirates — which were using the weapons to strike civilians as part of a disastrous war in Yemen — prompted an outcry from human rights groups and some members of Congress, who repeatedly tried to block the sales.

But Raytheon, which pays an army of well-connected lobbyists, overcame the opposition and sold the arms — thanks in part to its close ties with the Trump administration.

General Austin also has served as a partner at an investment firm named Pine Island Capital, whose board he joined in July. The firm has been on a recent buying spree of small military contractors, including Precinmac Precision Machining, which sells specialized parts for rocket launching systems and machine guns.

At the time General Austin joined the firm, Pine Island said he was “already fully engaged, working with us on new investments, bringing his experience and judgment to our portfolio companies,” which include InVeris Training Solutions, which provides virtual weapons firing training.

General Austin, Anthony J. Blinken, Mr. Biden’s choice as secretary of state, and Michèle A. Flournoy, who had been another candidate by Mr. Biden for defense secretary were added to the Pine Island team because of their connections, the company made clear as it promoted itself in recent months in advance of selling $218 million in stock to prepare to buy other defense industry targets.

Pine Island has a partnership with WestExec Advisors, a consulting firm founded in part by Mr. Blinken and Ms. Flournoy. Another Raytheon board member, the former Pentagon official Robert O. Work, has also been involved with WestExec and has advised Mr. Biden’s transition on national security planning.

While WestExec has advised at least one defense contractor, a WestExec spokeswoman did not respond to questions about whether Raytheon has been a client, explaining the firm has nondisclosure agreements with many clients and “does not comment on possible clients.”

In response to questions about General Austin’s ties to defense contractors, Andrew Bates, a spokesman for Mr. Biden’s transition said “every cabinet member will abide by all disclosure requirements and strict ethics rules — including recusals when appropriate.”

He added that if confirmed, General Austin and Mr. Blinken would both sell off any stakes in Pine Island.

It is not clear how much equity they own in Pine Island.

Mandy Smithberger, a director at the Project on Government Oversight, which tracks federal contracting decisions, said the problem with hiring former industry executives as top Pentagon officials was broader, because they often bring with them a pro-industry mind-set.

As a result, she said, it could be harder for Mr. Biden’s administration to make the tough choices that will be necessary as the United States faces large budget deficits and growing demands for increases in public health programs to be better prepared for the next global pandemic.

“The defense industry is already far too close to the Pentagon and if the Biden administration is going to reform the department in the kind of way we know that needs to happen, this has to change,” Ms. Smithberger said. “What is in the best interests of our national security may not be same as what is in the best interest of the defense industry.”