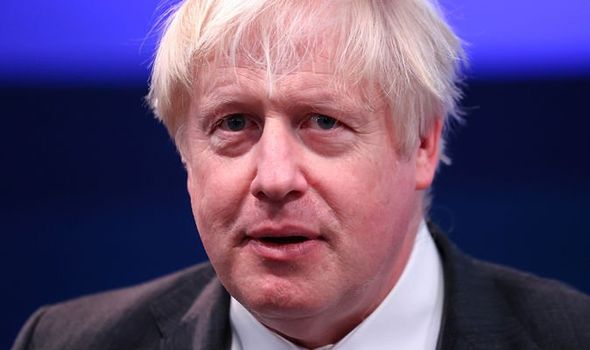 Back in 2016, Mr Johnson knocked off a limerick in which he implied Turkish president Recep Tayyip Erdoğan enjoyed carnal relations with a goat.

Such lampooning of the leader of an important Nato ally might have wrecked the career of a normal MP but just a few months later Theresa May appointed him Foreign Secretary.

He has spent his adult life getting in and out of outrageous scrapes – and often emerging more popular and powerful. This knack for survival may convince him that if MPs trigger a vote of no confidence in the coming weeks he has a more than decent chance of winning it.

When he looks around the Cabinet table at potential rivals he might snort at the notion they could pull off his feat of winning formerly Labour-held seats in the north of England while keeping the Liberal Democrats at bay in the south. Would voters in Workington, Wrexham and Kensington cross the street for a selfie with any other holders of the great offices of state?

The PM may calculate that if he can convince first-term MPs their re-election hopes depend on him staying at the Tory helm, and then unite the party behind a credible vision for levelling-up post-pandemic Britain, the Johnson era may not be in its final act.

He has repeatedly demonstrated that the accepted rules of political physics do not apply to him. When Mrs May’s own premiership imploded – in no small part thanks to the actions of Mr Johnson and his fellow Brexiteers – the now-former Foreign Secretary found himself in competition for the Tory leadership with Michael Gove, but his bid fizzled out after it was revealed he had taken cocaine as a young journalist.

No investigative sleuthing was required to unearth evidence of Mr Johnson’s own encounters with various grades of drugs. Helpfully, in 2007, he had told Piers Morgan that he tried cocaine at university and remembered it “vividly” although it “achieved no pharmacological, psychotropical or any other effect”.

He carried on in this spirit of candour, describing how he had smoked “quite a few” cannabis spliffs before starting his studies. His familiarity with controlled substances did nothing to stop him winning the first round of the leadership contest and going on to compete against Jeremy Hunt, his successor at the Foreign Office, for the votes of Tory members.

The pair were just about to start a gruelling series of public hustings when it was reported that police had arrived at the flat he shared with then-girlfriend Carrie Symonds after “screaming, shouting and banging” was heard and a neighbour phoned 999.

The candidate turned up at the Birmingham hustings the next day with no intention of offering an explanation. Host Iain Dale repeatedly asked him why the Met had come to his door but he insisted the audience “did not want to hear about that kind of thing”.

Despite this being a de facto audition for the highest non-royal job in the land, the stonewalling strategy worked. Audience members started barracking the journalist, telling him to “move on”.

Doubts among paid-up activists that Mr Johnson should take up residency in Downing St receded as the weeks rolled on and he won two-thirds of the party vote.

This was the latest evidence of his mastery of one of the greatest arts in political alchemy, turning notoriety in electoral gold.

Throughout his life, the 57-year-old has been hit with self-generated disasters which would have derailed the ambitions of less resilient souls.

Shortly after graduation he landed a job at The Times but was sacked amid claims he had fabricated a quote his godfather, the Oxford historian Colin Lucas. Mr Johnson later admitted he had “mildly sandpapered something somebody said”.

The debacle did not detonate his journalist career. He promptly joined the Daily Telegraph where he won Fleet St fame for his dispatches from Brussels which delighted eurosceptics, and in 1999 he was handed the editorship of The Spectator.

He didn’t relinquish this coveted position when he won election as the MP for Henley in 2001 but the double-jobbing led to one of his worst imbroglios.

A leader column appeared in the magazine in 2004 in the wake of the murder of Ken Bigley – the Liverpool-born engineer who was beheaded in Iraq – which claimed the people of the city “wallow” in their “victim status”. It accused Liverpudlians of failing to acknowledge the role played by “drunken fans” in the 1989 Hillsborough disaster.

Mr Johnson, by now the Tories’ culture and arts spokesman, apologised for the false claim and the “hurt and dismay” the column caused. His visit to the city to say sorry spiralled into a media circus, with the Liverpool Echo putting a picture of him with a red nose on its front page with the caption: “Who is this clown?”

He admitted that Conservative leader Michael Howard had given him a “kicking” – but this would not be his last run-in with the party boss.

The MP had described claims of his affair with writer Petronella Wyatt as an “inverted pyramid of piffle”. In November 2004, when Ms Wyatt’s mother revealed that her daughter had an abortion after becoming pregnant with Mr Johnson, the Tory leader’s patience snapped and he sacked him for not telling the truth.

Unlike contemporaries such as David Cameron and George Osborne, he was going in the wrong direction down the greasy pole, but he enjoyed the consolations of becoming a celebrity.

He showed off his comedy skills on Have I Got News For You, made documentaries, wrote books, gave lucrative speeches and earned many times his MP’s salary as the Telegraph’s star columnist.

Scandals did not hold back his fame but bounced him to ever-greater prominence. His humour, self-deprecation and carefully cultivated aura of chaos encouraged people to forgive his foibles.

This became one of his greatest strengths as the Boris brand evolved. People priced-in the possibility of scandals when they voted for this scamp.

He was the model of a non-judgemental and life-loving Tory whose mission in life is to ensure that everyone has as much fun as possible. The gaffes kept coming – such as when he responded to Jamie Oliver’s crusade for healthier school dinners by reportedly asking why mothers shouldn’t “push pies through the railings” – but these won him popularity with a mischief-loving public.

Mr Johnson’s star morphed into a comet heading straight for the UK capital. His brand of liberal conservatism was just what legions of Londoners wanted after two terms of Ken Livingstone and in 2008 he entered the premier league of politicians as the city’s mayor and continued his long march towards No 10.

His sojourn as Foreign Secretary was not a glorious one. He caused dismay when he said that Nazanin Zaghari-Ratcliffe – who was imprisoned in Iran for allegedly plotting to overthrow the government but whose husband insisted she was “just a mum on holiday” – was “simply teaching people journalism”.

This didn’t stop him reaching Downing St and at first it looked as if he remained cloaked in a scandal-dispelling forcefield.

In September 2019 the Supreme Court unanimously ruled that his advice to the Queen to prorogue parliament was unlawful. Rather than see this as a constitutional outrage, voters awarded Mr Johnson an 80-seat majority in December. Millions of people in a country with a deep aversion to red tape applauded his ruthless determination to “get Brexit done”.

Likewise, the details of his alleged affair with Jennifer Arcuri – whose technology business received public funds – made headlines and continues to be probed, but it is hardly a national obsession.

Alas for the PM, his forcefield has now been switched off. He is in deep trouble over the Downing St party saga for two key reasons.

First, he is no longer a mischievous maverick but the PM; if it is established he condoned illegal parties while people couldn’t visit frail and dying relatives he will be seen as the embodiment of an aloof elite which does not live by the rules it imposes on others.

Second, MPs are worried the Boris brand is so damaged he can no longer work magic at the polls, as the loss of North Shropshire in the recent by-election may demonstrate.

Mr Johnson could be forgiven for wanting to quit the political melee and enjoy time with his new children. But he has faced crises throughout his life which would have sent his peers scuttling out of the public square, frightened and mortified.

He is animated by nothing less than a quest for glory. He will see this chapter of discontent as a mighty challenge in a hero’s journey that he will one day document in epic memoirs.

The intensity of this present peril may only strengthen his appetite for the fight.