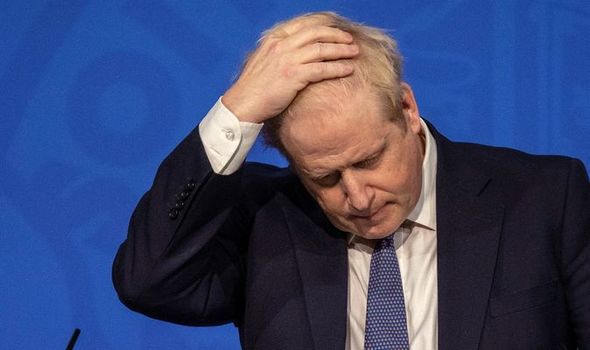 Tory MPs are flocking to submit their letters of no confidence to 1922 Committee chairman Graham Brady after the Prime Minister admitted to attending a lockdown-breaking garden party at No10. Mr Johnson told the Commons yesterday he “regretted” the way he handled the May 20, 2020, “bring your own booze” event at a time when the British public was only allowed to see one other person outside their household. His admission led the leader of the Opposition Sir Keir Starmer to demand his resignation – a call quickly joined by Scottish Tory leader Douglas Ross and 27 other Conservative MPs publically.

Johnson tells MPs he thought it was a ‘work event’

In the House of Commons, Boris Johnson said that he attended the May 20 2020 gathering for around 25 minutes to “thank groups of staff” and that he “believed implicitly that it was a work event”.

“With hindsight I should have sent everyone back inside,” he added.

The Prime Minister acknowledged public anger, saying: “I know the rage they feel with me and with the Government I lead when they think in Downing Street itself the rules are not being properly followed by the people who make the rules.

“There were things we simply did not get right and I must take responsibility.”

The Prime Minister refused to offer additional information under peer scrutiny, instead telling MPs they should wait for the conclusion of Sue Gray’s inquiry into the event.

It is “just a matter of time” before there have been enough votes of no confidence submitted to trigger a leadership contest, according to a 2019 MP.

Speaking to political journalist Aubrey Allegretti, the Tory MP said they had submitted their vote of no confidence on Wednesday.

Leader of the Scottish Conservatives, Douglas Ross, has also submitted his, supported by his predecessor Ruth Davidson.