The Prime Minister rejected suggestions he should set up a more permanent council with leaders of the devolved administrations to discuss matters affecting the whole United Kingdom. He made his remarks after Welsh First Minister Mark Drakeford suggested a more federal model was needed to preserve the future of the UK in the long run.

Appearing in front of the liaison committee of MPs this afternoon, Mr Johnson said: “I think the role of the Prime Minister of the UK is to lead the whole of the UK.

“I’m very much in favour of the Council of the Isles for instance where we come together as representatives across the whole of the British Isles to talk about issues which matter to us.

“On the other hand, I don’t think we want to turn out deliberations into a kind of ‘mini-EU’.”

He added: “What I don’t think would necessarily be right is a sort of permanent council as it were, of the kind that is taking place tomorrow in Brussels. 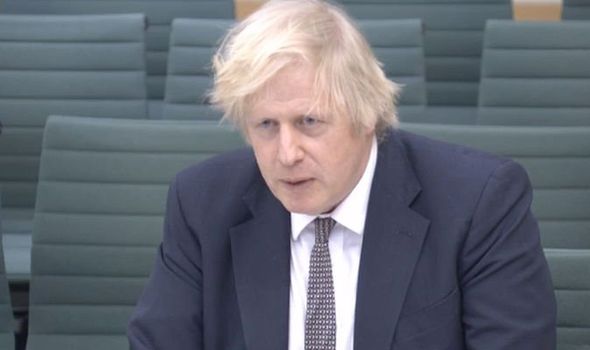 “I don’t think that is the model we are after.”

He said as well as remaining in contact with leaders of the nations himself, Michael Gove was holding daily meetings with the devolved administrations to combat the pandemic together.

“The way it works is the Chancellor of the Duchy of Lancaster has been chairing the meetings involved and that’s how it has tended to work,” the Prime Minister said.

“It’s a system that has presented much more unity than is commonly supposed from the coverage.”

In January the Welsh First Minister, Labour’s Mark Drakeford, said the UK had to be “radically redrawn” in order to survive.

He said without immediate action being taken there was a “real and present danger” to the future of Great Britain.

Repeating similar remarks earlier this month, the First Minister said: “We have to create a new union.

“We have to demonstrate to people how we can recraft the UK in a way that recognises it as a voluntary association of four nations, in which we choose to pool our sovereignty for common purposes and for common benefits.”

He said: “The idea that sovereignty is held only in one place and is handed out to other places, but always on a piece of string so it can be pulled back to the centre at any moment when the centre requires, I think that is over.

“The European Union will be an example potentially but Canada, or Australia, or the United States, are examples of what I talked about, where sovereignty is dispersed amongst its component parts and pooled back together again for those central purposes.”

Mr Drakeford has been a vocal critic of the Prime Minister and accused him of failing to properly engage with the leaders of the devolved administrations.

Responding to the criticism today, the Prime Minister said: “I’m sorry to hear that mark Drakeford doesn’t feel he gets enough time with me, I will do what I can to rectify that.

Referring to his relationship with the devolved leaders, he added: “Obviously I need a good relationship with everybody and I’ve talked many times to Nicola, Mark, Michelle and Arlene and continue to do so – that’s the way it should be.”