The Prime Minister used a televised coronavirus briefing this evening to outline his plans for Stage 4 of his roadmap out of lockdown for England. The last step in his plan back to normality was due to take place on June 21 but was delayed by four weeks due to a surge in cases of the Delta variant.

But following the continued deployment of the UK’s immunisation programme ministers are now confident of being able to take the next step in a fortnight’s time.

Mr Johnson will hold another televised briefing next Monday when he will confirm if the July 19 unlocking can go ahead as planned.

Speaking this evening the Prime Minister outlined exactly what Stage 4 would look like in order to give Britons and businesses time to prepare.

The wide-reaching changes include the ending of compulsory mask wearing in public spaces, the lifting of limits on social gatherings and in venues, and the end of the working from home guidance. 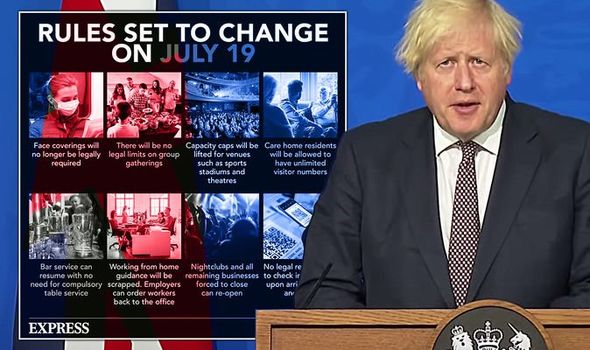 Social distancing will continue to be required when arriving in the UK and going through customs checks.

Officials say the measures will help stop the spread of any potential mutant strains from amber and red list countries.

Those who test positive for coronavirus or are identified as close contacts of someone who has tested positive will continue to be required to isolate.

No10 officials said plans to allow those who are double-jabbed to cut quarantine at some point in the future would be announced in the coming days.

Mr Johnson said he is confident of moving onto Stage 4 on July 19 due to the high vaccination rate. 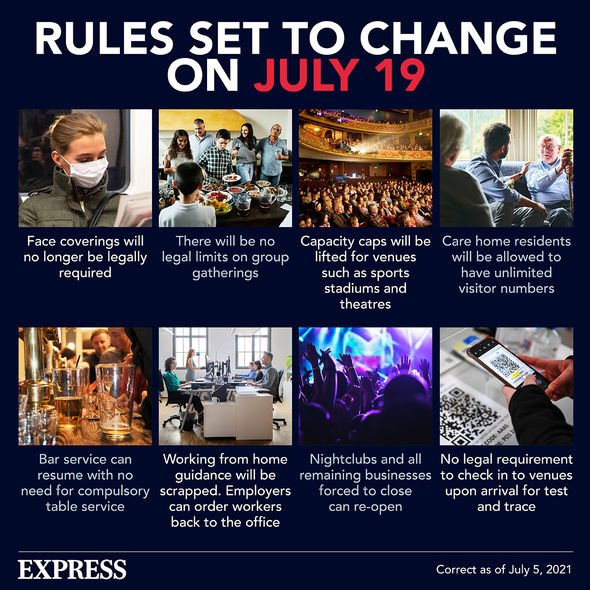 Data from Public Health England shows that vaccines are highly effective in preventing severe illness and hospitalisation from this variant.

The analysis indicates two injections of Pfizer-BioNTech is 96 percent effective against severe illness.

The Oxford-AstraZeneca vaccine is 92 percent effective against hospitalisation.

It means, despite a rapid increase in daily Covid cases in recent weeks, the number of hospitalisations and deaths has remained relatively low.

The latest figures indicate there have been 27,334 new infections in the last 24 hours.

In the same time frame, nine fatalities have been recorded and 358 Covid patients have been admitted to hospital.

The announcement on the planned rule changes comes despite backlash at the easing of restrictions from some groups.

The trade union Unite, which represents tens of thousands of public transport workers, claimed it was “gross negligence” to end the requirement of face masks in public spaces on July 19.

Unite national officer for passenger transport Bobby Morton said: “To end the requirement to wear masks on public transport would be an act of gross negligence by the Government.

“Rates of infection are continuing to increase and not only does mask wearing reduce transmissions, it helps provide reassurance to drivers and to passengers who are nervous about using public transport.

“The idea of personal responsibility and hoping that people will wear masks is absolutely ridiculous.

“Members are already reporting there is an increase in passengers ignoring the rules on mask-wearing.

“Until rates of Covid-19 are fully under control, throughout the whole of the UK, the rules on mask-wearing on public transport should remain in place.”