Brexit LIVE: EU crumbles as Irish fishermen turn on allies – ‘Macron got what HE wanted!’

The Brexit deal will see the EU handing back 25 percent of its share of the catch in UK waters over a transition period last five-and-a-half years, after which both sides will hold annual negotiations on some 100 shared stocks from 2026. But Sean O’Donoghue, chief executive of the Killybegs Fishermen’s Organisation (KFO), the largest fishermen’s representative body in Ireland, warned the deal between the UK and EU demonstrated the “duplicitous nature of the protracted negotiations” and that the “repeated guarantees” made to Irish fishermen had effectively been broken. He warned the agreements spanning four-and-a-half years since the Brexit referendum had been “dishonoured by the negotiators”

Scallop skippers Seamus Molloy and Will Bates from Kilmore Qua and fish 12 miles off the French coast, warned Ireland must start “taking back”, given that it will represent some 12 per cent of EU waters – but with “30 per cent of fishable waters”.

Mr Molloy told Irish maritime website Afloat.ie: “The French – we all know they are militant enough and seem to get what they want all the time – they have kept open from the six-mile to the 12-mile limit, but I don’t know why it is not open to us.

“I imagine when England said they were claiming back some of their sovereignty, when they got to the 12-mile limit, they would have been happy enough to leave quotas everywhere else.

“We have seen Macron intervene with Barnier and whatever happened between the two of them, this wasn’t on the table. 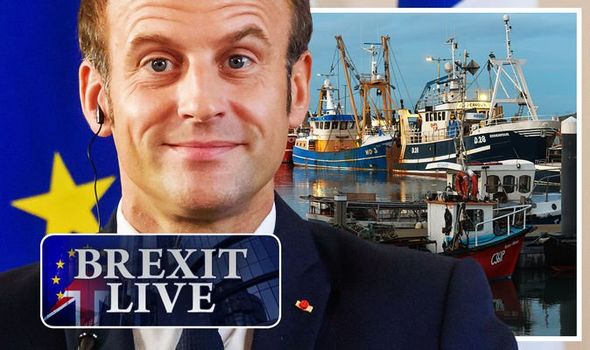 “The Irish seem to have been sacrificed across the board – we seem to have lost a large part of our mackerel quota and prawn quota.”

Mr Molloy added: “We’re waiting for confirmation but when you read it, I think we’re in trouble.

“Down to the numbers alone with France, we have given up a massive amount of our mackerel quota and prawn quota.

“When you look at the English Channel, the whole sector is sectioned off and when you divide up the English Channel in half, some of these sectors cross between the French sector and the English sector so if they turn around and stick a limit on us, they will actually do the same for French waters as well.

“This would be double hit for us.

“We have had unfettered access to English waters day one. We have our own system here where we are limited but because our fleet is so small, we have enough access.

“This is something we have always had and I don’t see why we should lose it now.”