The Alliance Party offered up a way to prevent issues with the new “sea border” with Northern Ireland. They called for a deal between the UK and EU that would stop sanitary and phytosanitary checks on meat and plant products. The centre-ground party argued this could mean hauliers could cross without needing signed export health certificates for each animal or food consignment.

However, Britain has previously shunned a potential veterinary standards deal with the EU over concerns this would keep the UK legally bound to the EU’s standards for animal health and food safety.

But Cabinet Office Minister Michael Gove did not rule out the proposal as he said it was “a potential way forward.”

EU Commission Vice President Maros Sefcovic added the EU is “always ready to deliver” on its commitments surrounding the post-Brexit arrangements to avoid a hard border on the island of Ireland.

He told RTE: “I personally would like to hear from the business and civic society in Northern Ireland. 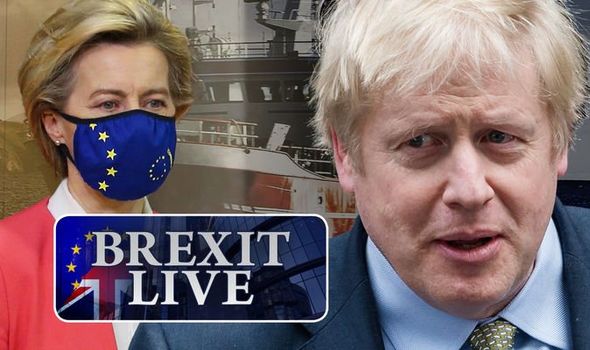 “Any refinements to the protocol’s regulatory requirements would have to be “a two-way street.

“The UK has to show us how they’re using the flexibilities which we already agreed upon, and if there are problems, let’s solve them.

“A full assessment of “how all these flexibilities are working [is a] prerequisite for any further step.”

The European Commission vice-president said efforts to address problems with the Northern Ireland Protocol should be a two-way street,

Maros Sefcovic said the EU is “always ready to deliver” on its commitments surrounding the post-Brexit arrangements to avoid a hard border on the island of Ireland.

Mr Sefcovic told Euronews the EU is “always ready to deliver” on its commitments but the UK must realise the effort is a “two-way street”.

He said: “I believe if the UK used all the flexibilities which we already agreed upon in December, then also the implementation of the protocol would be much easier.”