On the football field at Christopher Newport University in Virginia, Noah R. Green was No. 21, a dependable and good-natured, if soft-spoken, presence in the defensive backfield. Off the field, he was laser-focused on Black economic empowerment, counseling teammates on financial management and plotting a career helping close the racial wealth gap.

But by late March, after a bruising pandemic year that friends and family said left him isolated and mentally unmoored, Mr. Green’s life appeared increasingly to revolve around the Nation of Islam and its leader Louis Farrakhan, who has repeatedly promoted anti-Semitism. “Follower of Farrakhan,” Mr. Green labeled himself on Facebook, where he described leaving his job and grappling with “some of the biggest, unimaginable tests in my life.”

None of it appeared to hint at what he would do next. On Friday afternoon, law enforcement officials said, Mr. Green, 25, drove a dark blue Nissan sedan from nearby Virginia to the United States Capitol and plowed into two police officers protecting the grounds, killing one and injuring another. He then got out of the car brandishing a knife and lunged at officers. Police shot and mortally wounded him.

The attack, which pierced through the calm of a spring afternoon on Capitol Hill, halted the return to normalcy that had slowly begun to take hold there following the deadly Jan. 6 riot. It sent the police force that protects the Capitol into a fresh round of mourning and further complicated a raging debate over how to secure the seat of Congress at a time of increasing threat.

And it raised questions about how a dedicated athlete and aspiring businessman with no known history of violence came to turn his car into a lethal weapon. Without a clear motive, investigators were frantically combing through a trove of social media posts and a trail of woes described by people close to Mr. Green to understand what happened.

Police have not categorized the incident as an act of domestic terrorism. A senior law enforcement official, who spoke anonymously to describe the active inquiry, said that, based on early evidence, investigators believed that Mr. Green was influenced by a combination of underlying mental health issues and a connection to an ideological cause that provided justification to commit violence.

Brendan Green told The Washington Post on Friday that his brother had been teetering on the edge for months, plagued by mental health problems and possibly drugs. Noah Green had briefly moved to Botswana this year, he said, and tried to jump in front of a car, before returning and asking to move in with his brother in suburban Virginia, not far from Washington. Brendan Green said his brother had become violently ill on Thursday night and left the apartment, declaring that he was ready to become homeless.

Attempts to reach Brendan Green and other members of the Green family were unsuccessful, including at his Virginia apartment. The family gave a statement to The Post on Saturday expressing condolences for the family of Officer William F. Evans, who died in the attack, and speculating that Mr. Green’s struggles may have been related to head injuries sustained playing football.

One of 10 siblings, Mr. Green grew up in Covington, Va., a largely white Shenandoah Valley town of less than 6,000 dominated by a WestRock paper mill. On Facebook, he described it as not “the best of circumstances,” but at Alleghany High School, he was voted the most valuable player of the football team and won honors on the track team. 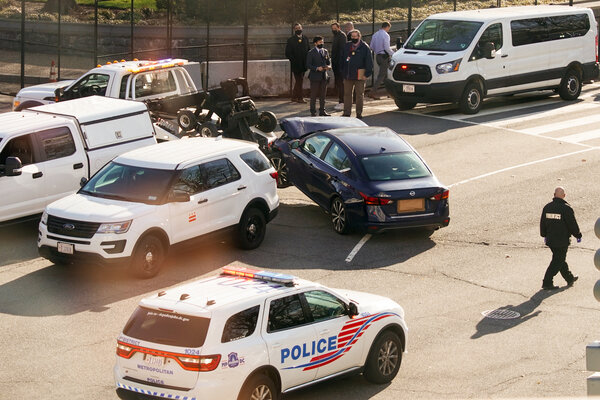 After a stint at Glenville State College in West Virginia, he transferred to Christopher Newport University, a small public school in Newport News, Va., where he studied business and joined the football team. In a university player profile, he spoke of dreaming of vacationing in Jamaica, admiring his grandmother and wanting to meet Malcolm X.

Former teammates described Mr. Green as a hard worker and said he was close to his family, whose members would make the lengthy drive across the state to watch him play. But on and off the field, they said, he kept mostly to himself.

“He would be there, but he like wasn’t really there,” said Chet Wilborne, a fellow defensive back. “I feel like he always felt like an outsider.”

The distance only grew, Mr. Wilborne recalled, after Mr. Green accused someone of drugging him with Xanax, a powerful anti-anxiety drug, without his knowledge. Mr. Wilborne remembered Mr. Green saying that the incident “altered my mind-set about how I think about people.”

“Everybody at school was talking about it,” Mr. Wilborne said.

Another teammate, who asked to remain anonymous given the sensitivity of the ongoing investigation, recalled that Mr. Green would often talk to fellow players about strategies to save and invest, emphasizing the need to close the wealth gap between white and Black America.

Mr. Green volunteered one summer for a college program focused on preventing violence in the nearby Hampton Roads. And after college, the teammate said, Mr. Green began working as a financial adviser, with aspirations to start a finance company to help the Black community and eradicate poverty.

Mr. Green made little secret of his more recent struggles and his apparently intensifying interest in the Nation of Islam. He posted speeches and articles by Mr. Farrakhan and Elijah Muhammad, who led the Nation of Islam from 1934 to 1975, discussing the decline of America.

A string of posts in the early hours on March 17 charted his course as he saw it.

“I was able to graduate with distinction, earn a well-paying job straight out of college, and pursue my graduate degree, despite not growing up in the best of circumstances,” he wrote on Facebook. “My ultimate goal was to learn business, after hearing the words of the Minister years ago, and to use that to improve the lives of communities most in need. Particularly, the communities of black and brown here in the United States.”

But, Mr. Green wrote, Allah evidently had different plans. He said he was newly unemployed, having left his job “partly due to afflictions” left unnamed. He pointed without detail to struggling with “side effects of drugs I was intaking unknowingly.” His ambitions to build a career in business had been “thwarted.”

“I haven’t had much to lean on the past few months, I’ve been faced with fear, hunger, loss of wealth, and diminution of fruit,” he wrote. “My faith is one of the only things that has been able to carry me through these times.”

Mr. Green also posted a photo of a $1,085 donation he made as “Noah X” to the Nation of Islam’s Norfolk chapter for Saviours’ Day, the holiday honoring the birthday of its founder. A group of members standing outside the Norfolk chapter on Saturday declined to comment on Mr. Green when approached by a reporter.

A Black nationalist movement that has pushed for African-American self-sufficiency, the Nation of Islam has been condemned by the Southern Poverty Law Center for “the deeply racist, anti-Semitic and anti-gay rhetoric of its leaders,” including Mr. Farrakhan.

Mr. Green’s adherence is likely to increase scrutiny on the group, as investigators try to determine whether his beliefs played a role on Friday’s attack. The relationship between violence and the Nation of Islam has been debated since it started about 90 years ago, especially as outsiders and insiders have disagreed over its teachings.

“From the earliest times in Nation history, people have been taking these texts and saying, this is about killing white people,” said Michael Muhammad Knight, an assistant professor of religion and cultural studies at the University of Central Florida, who specializes in American Islam.

“The Nation has a very strong anti-violence discourse that goes all the way back to the beginning,” he said. “Consistently, if you look at the Nation, you don’t see the body count that white supremacist organizations have.”

In his Facebook posts, Mr. Green sometimes used apocalyptic language, suggesting he believed in an imminent end-of-world conflict. He referenced the “mother wheel,” which in Nation teachings is a spaceship that will descend on America in an apocalyptic battle, Mr. Knight explained.

In his final Facebook post on March 21, Mr. Green wrote about a “divine warning,” that these were the “last days of our world as we know it.”

Court records in Indiana, where he briefly lived, show Mr. Green had applied in December to legally change his name to Noah Zaeem Muhammad. But when he didn’t show up for a hearing in the final days of March, the proceeding was dismissed.

By then, he was back in Virginia, living with his brother. Just days later, he would drive to the Capitol.