Former MPs who go on to work as lobbyists should “absolutely not” have continued access to parliament, the Commons Speaker has said.

Sir Lindsay Hoyle revealed he had asked a senior MP to look into the issue for him and was awaiting the findings of a report.

Amid fresh scrutiny of MPs’ second jobs and mounting “sleaze” claims, the Speaker also warned parliamentarians: “We will all be judged by the electorate.”

He said this included Conservative former cabinet minister Sir Geoffrey Cox, who has been revealed to have voted by proxy in the Commons while earning hundreds of thousands of pounds for legal work in the Caribbean.

According to the latest Commons data, there are more than 280 former MPs who continue to hold an access pass for the parliamentary estate.

They include ex-MPs who have gone on to work for lobbying companies.

The granting of parliamentary passes to former MPs has frequently raised concerns that those who have since moved into private sector roles could continue to influence serving members and ministers.

Former MPs are explicitly forbidden from using their passes in connection with lobbying activity.

But Sir Lindsay said a fresh review of the issue was being conducted in the face of the current “sleaze” allegations surrounding parliament. 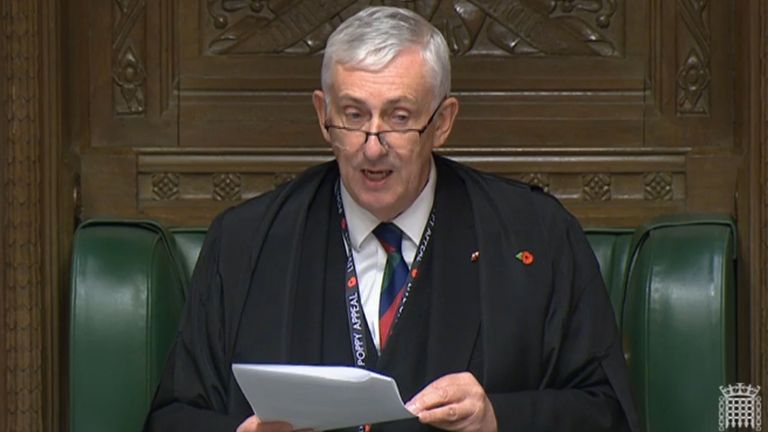 Asked if former MPs who go on to work for private companies should continue to have access to parliament, the Speaker said: “If you’re a lobbyist, I don’t think it’s right they should have a pass for this House.

The MP tasked with filing a report on the issue is Conservative Sir Charles Walker, who chairs the Commons’ administration committee.

The recent bout of “sleaze” allegations was prompted by the government’s attempts to save Owen Paterson from an immediate Commons suspension.

It came after the former cabinet minister was found by a watchdog to have breached lobbying rules during his £110,000 per year private sector work.

Sir Lindsay described the events as part of a “very dark week” for parliament, and warned MPs that “what you do now will be brought up at the next election”. Asked about the revelation of Sir Geoffrey’s proxy voting while working in the British Virgin Islands, Sir Lindsay added: “What I would say is, of course we’ve all seen the media that says someone’s earning a lot of money overseas.

“The fact is, he’s broke no rules.

“But I’ll tell you what, we will all be judged by the electorate, including that said member.”

Prime Minister Boris Johnson, who missed an emergency debate on standards in parliament this week, has said MPs who break the rules on second jobs “should be punished”.