WASHINGTON — Congressional leaders worked feverishly on Saturday to resolve an impasse over a Republican push to curtail the powers of the Federal Reserve that was threatening to derail a compromise $900 billion stimulus plan, racing against a Sunday-night deadline to avoid a government shutdown.

After a monthslong impasse on a pandemic aid package, Democrats and Republicans were tantalizingly close to completing the emergency plan to rush direct payments, unemployment benefits and food and rental assistance to millions of Americans, relief to businesses, and provide funds for vaccine distribution.

But with time running out for a deal, they remained divided over a proposal by Senator Patrick J. Toomey, Republican of Pennsylvania, to ensure the termination of a series of pandemic relief programs created this year by the Fed and potentially curtail the central bank’s ability to fight financial crises in the future.

“We’re right within reach,” Speaker Nancy Pelosi privately told House Democrats in a party conference call on Saturday. But she said Mr. Toomey’s late-stage demands to rein in the Fed were slowing the process.

By Saturday evening, Senator Richard J. Durbin of Illinois, the second-ranking Democrat, said the dispute had cost negotiators another day in their efforts to cement a deal.

“It won’t be tonight,” Mr. Durbin said. “It really is up to Mr. Toomey at this point, what he will accept.”

Everything else, he said, is “pretty close.”

The emerging deal would send direct payments of $600 to many Americans and provide enhanced federal jobless payments of $300-per-week until early spring. It would also provide hundreds of billions of dollars to prop up small businesses, schools and other institutions struggling amid the pandemic.

But Democrats said that Mr. Toomey’s proposal, which has been embraced by Republicans, amounted to an attempt to undercut President-elect Joseph R. Biden Jr. and his administration’s ability to continue supporting the country’s economic recovery.

As drafted, it would prevent the Fed and the Treasury Department from re-establishing programs that have helped to keep credit flowing to municipal borrowers, medium-sized businesses and corporations during the pandemic recession. It would also bar the creation of “similar” programs going forward.

Lawmakers and aides in both parties acknowledged that the Fed provision presented the most significant hurdle to a final agreement, even though negotiators were still haggling over a number of outstanding technical details, including how to provide for food assistance and the scope of unemployment benefits. 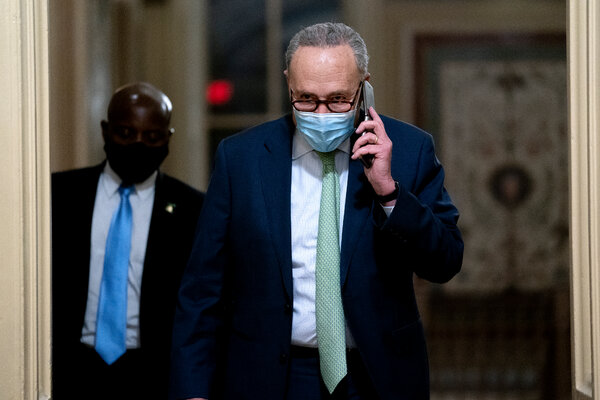 Senator Chuck Schumer, Democrat of New York and the minority leader, said on the Senate floor that Mr. Toomey’s language was the “number one outstanding issue.”

With government funding set to lapse Sunday and both chambers hoping to merge the stimulus package with a catchall measure to cover all federal spending for the remainder of the fiscal year, time was dwindling to find a resolution.

Mr. Toomey and his Republican allies argued that his proposal merely codified what Congress intended in March when it enacted the original $2.2 billion pandemic stimulus law, which earmarked funding to support the Fed’s emergency lending programs. But the scope of the language proposed by Mr. Toomey went beyond that, prompting alarm from Democrats, who said they were enlisting prominent figures to weigh in against it.

Ben S. Bernanke, who led the Fed through the 2008 financial crisis, issued a statement warning that it was “vital that the Federal Reserve’s ability to respond promptly to damaging disruptions in credit markets not be circumscribed.”

Referring to the March stimulus law, Mr. Bernanke added, “The relief act should ensure, at least, that the Federal Reserve’s emergency lending authorities, as they stood before the passage of the CARES Act, remain fully intact and available to respond to future crises.”

Mr. Schumer said that Jerome H. Powell, the current Fed chairman, whom he called “hardly a flaming liberal” was “strongly opposed” to Mr. Toomey’s proposal. The Fed declined to a comment on whether Mr. Powell, a Republican who was nominated by former President Barack Obama, had discussed the issue with Mr. Schumer in recent days.

On the private call with House Democrats on Saturday, Ms. Pelosi denounced the proposal, telling lawmakers that “for them to write in there that this cannot happen ever again is just beyond the pale,” according to a person on the call, who disclosed the comments on the condition of anonymity.

“It’s a way for them to say to Joe Biden: ‘We are tying your hands. No matter what comes down the pike, you can’t do this,’” Ms. Pelosi told Democrats.

Mr. Toomey defended the provision, arguing that Democrats had pushed for very generous terms on the municipal program in particular, with an eye on helping state and local governments gain access to cheap financing. Republicans have long objected to providing a direct stream of aid to state and local governments, and Democrats are seeking to provide relief through other avenues.

“Some of my colleagues want to morph these facilities into a use that was never intended for them,” Mr. Toomey said. “Fiscal and social policy is the rightful realm of the people who are accountable to the American people, and that’s us — that’s Congress.”

Mr. Toomey denied that he was seeking to hamstring the Biden administration, and pointed out that he had for months sought to ensure that the Fed’s pandemic programs sunset. But the language he has proposed to attach to the stimulus plan has been more expansive than that.

Republican senators rallied around Mr. Toomey on Saturday. Senator Mitch McConnell of Kentucky, the majority leader, privately told them during an afternoon call with Steven Mnuchin, the Treasury secretary, that they should stand firmly behind Mr. Toomey.

Senator Tom Cotton, Republican of Arkansas, made a point to correct reporters and declare “it is not the Toomey language — it is the Senate Republican language, because we are wholly unified behind it.”

But there were indications that Mr. Toomey might be willing to compromise. While his initial proposal targeted all five Fed programs backed by the March stimulus law, an aide familiar with the discussions confirmed that the so-called Term Asset-Backed Securities Loan Facility — which helps to keep the market that bundles consumer and business-facing loans chugging — had been dropped from it.

The program was also used in the 2008 crisis to unstick markets, and it has fans on Wall Street.

In the absence of an agreement, Mr. McConnell used the rare Saturday session to force confirmation votes. Mr. Toomey could be seen circulating on the Senate floor, vigorously debating the language with his colleagues.

Huddled around desks in the back of the chamber, Mr. Toomey, Mr. Cotton, Mr. Schumer, and several other senators in both parties haggled. At one point, Senator Kyrsten Sinema, the pink-wigged Arizona Democrat, could be heard offering synonyms for legislative terms in an effort to reach a compromise.