The former party leader criticised his successor on Twitter after the loss of the Hartlepool by-election and scores of council seats. Sir Keir has sought to shift Labour more to the centre-ground since taking over as leader last April.

Attacking the decision, Mr Corbyn accused Sir Keir for a “loss of hope” as he urged the leadership to offer a more radical policy agenda.

He said: “Tory gains are bad news for jobs, the environment & public services for the many not the few.

“With millions not voting, these results show a loss of hope.

“We must offer a bolder vision to transform people’s lives and give them the confidence to strive for a more equal world.” 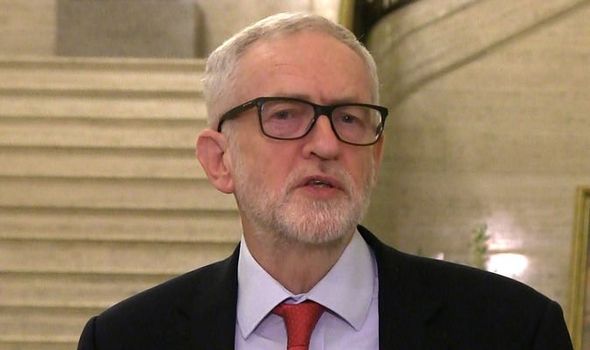 Labour lost the Hartlepool by-election to the Conservatives by a majority of almost 7,000.

The area was previously seen as a Labour heartland, with the town returning a Labour MP to Parliament for over 50 years.

The party has also lost scores of local council seats across the country, inflicting further damage to Sir Keir’s leadership.

Mr Corbyn has remained largely quiet about the leadership of Sir Keir over the past year.

His comments echo similar remarks made by others on the Left of the party, who are demanding a dramatic shift in policy.

“Labour won the seat twice under his leadership. Keir Starmer must think again about his strategy.”

“We are going backwards in areas we need to be winning.

“It should start by championing the popular policies in our recent manifestos – backed by a large majority of voters.”

Ex-shadow chancellor John McDonnell even suggested Sir Keir needed to offer policies that were more extreme than those offered by Labour in the 2019 election.

In its manifesto at the last general election, Labour under Mr Corbyn’s leadership pledged widespread re-nationalisation, free broadband for everyone, and drastic tax hikes.

Mr McDonnell told BBC Radio 4’s Today programme this morning: “In some instances, many of the policies advocated then were not radical enough for what we need now.

“Particularly given the levels of poverty that we have in areas like Hartlepool and the real challenges that people have because of low wages.”

Senior Labour MPs have rejected the narrative being painted by Mr Corbyn’s allies and have said the results prove a need for a bigger push to the centre-ground.

Shadow communities secretary, Steve Reed said: “What this shows is that, although we have started to change since the cataclysm of the last general election, that change has clearly not gone far enough in order to win back the trust of the voters.”

He added the loss of Hartlepool was “absolutely shattering”.