Home » Politics » Coronavirus: Passionate Raab urges ‘be a good egg’ and stay at home this Easter

Coronavirus: Passionate Raab urges ‘be a good egg’ and stay at home this Easter

The Foreign Secretary, standing in for virus-hit Boris Johnson, insisted the countrywide shutdown cannot be lifted until data confirms the peak of the epidemic has passed. He said: “We’re not done yet – we must keep going.” Mr Raab thanked the public for the “sacrifice” of staying away from loved ones and forgoing Easter egg hunts under the Government’s social distancing guidelines.

But he implored people not to ruin the effort by flouting the rules over the Bank Holiday.

His plea followed figures yesterday confirming a further 881 deaths from coronavirus in UK hospitals, taking the grim total to 7,978.

He said: “We’re starting to see the impact of the sacrifices we’ve all made. But the deaths are still rising, and we haven’t yet reached the peak of the virus. So it’s still too early to lift the measures that we’ve put in place. We must stick to the plan.” Last night, the Government launched a major advertising blitz highlighting the need to stay at home to stop the killer bug spreading.

The meeting – which also involved Scottish First Minister Nicola Sturgeon and other devolved government leaders – studied the latest data on the impact that the national shutdown has had on the spread of the disease ahead of a formal review of the social distancing rules next week. 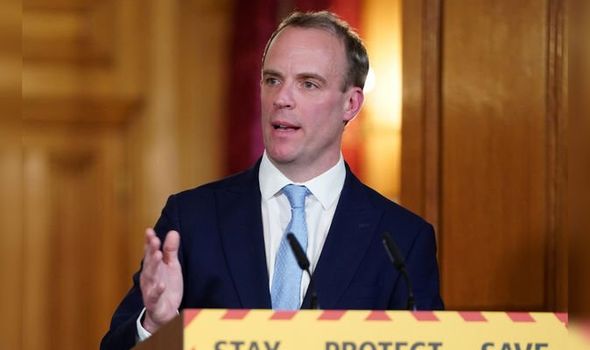 Government sources signalled that the rules, which were announced by the Prime Minister three weeks ago today, will be extended for several more weeks.

Mr Raab, who is also First Secretary of State, said: “The measures will have to stay in place, until we’ve got the evidence that clearly shows we have moved beyond the peak.”

Thanking the public for their cooperation so far, he added: “I know these restrictions take their toll, day in day out, on livelihoods, on quality of life and on mental health. And I appreciate that it’s often the little things that hurt the most.

“And I know there is going to be lots of people who would normally be planning a family get together or just getting out in the sunshine with friends and loved ones.

“Unfortunately, right now, we just can’t do those sorts of things.”

“We mustn’t give the coronavirus a second chance to kill more people and hurt our country.

“I know it’s tough going. But this is a team effort, and we’ll only defeat this virus for good if we all stay the course. So please stay home this Bank Holiday weekend, for everyone’s sake.”

Earlier, the Prime Minister’s spokesman said data showed the rate of new coronavirus infections was flattening but experts were unable to predict when the peak of the outbreak will be reached.