Home » Politics » COVID-19: London and other parts of South East to move into Tier 3 restrictions on Wednesday

COVID-19: London and other parts of South East to move into Tier 3 restrictions on Wednesday

London and parts of Essex and Hertfordshire will move into the highest level of coronavirus restrictions on Wednesday.

The move will see thousands of bars, pubs, cafes and restaurants close in the capital and surrounding areas after Tuesday night, except for takeaway, delivery and click and collect services.

The Tier 3 measures, announced to MPs by Health Secretary Matt Hancock, will come into force at 00.01am on Wednesday.

Along with Greater London, the south and west of Essex will soon be under the “very high” alert level.

The south of Hertfordshire will also move into Tier 3, which includes Broxbourne, Hertsmere, Watford and the Three Rivers local authority.

Mr Hancock told MPs that a “new variant of coronavirus” might be associated with the faster spread of infections in the South East.

But the health secretary stressed there was nothing yet to suggest the mutation was more likely to cause serious disease, or would fail to respond to a vaccine.

Under Tier 3 measures, people must not meet socially indoors, in private gardens, or at most outdoors public venues with anyone they do not live with or are not in a support bubble with.

The heightened restrictions also mean fans will likely once again be banned from football stadiums and other sporting venues.

And theatres are also set to have to close their doors once more.

However, the “rule of six” will allow people from different households to continue meeting in small groups outdoors in parks, public gardens, playgrounds or outdoor sports facilities. 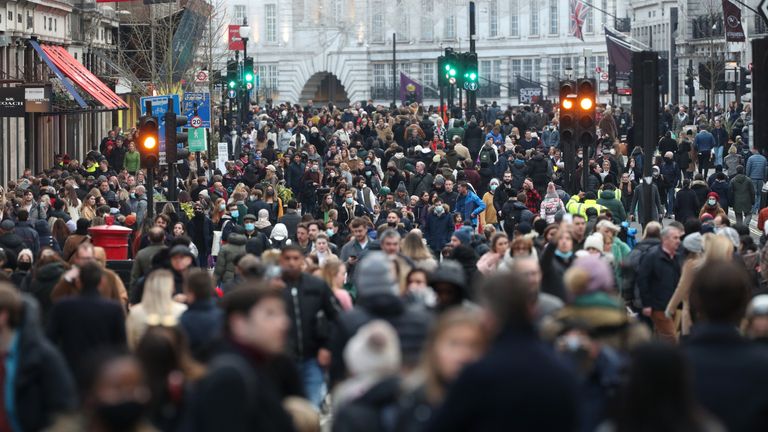 Responding to the announcement, London mayor Sadiq Khan said: “This is incredibly disappointing for our businesses who have suffered so much already this year.

“But it’s clear that the virus is accelerating in the wrong direction once again across London and the lives of Londoners are at risk.

“It would be such a tragedy to lose even more people to this disease when the vaccine is now being rolled out across our city.

“We know from bitter experience that when cases start to rise quickly, it’s much better to act early, rather than too late.

“This is how we can avoid even tougher restrictions, for longer, further down the world.”