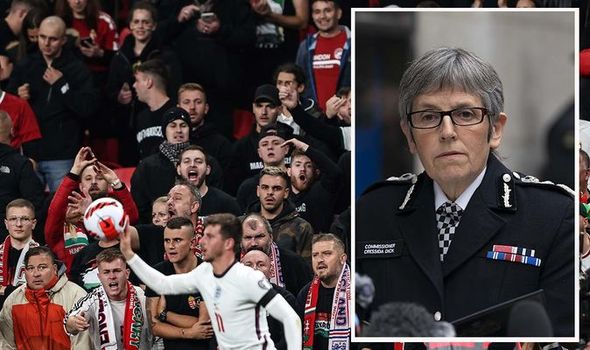 The match on Tuesday evening was marred by violence between supporters and the police and a Hungarian fan was arrested for allegedly making racist remarks to a steward. After the match, the Metropolitan Police said the trouble was “minor”, even though a large group of officers used batons to try to control the clashes with supporters.

However, there had been concerns of problems at the game after allegations that some Hungarian fans had made racist and homophobic attacks at the game in Budapest last month.

As a result, the Met said it had an increased presence at the match at Wembley.

However, it has since emerged that the Hungarian police offered to send officers to work with Met officers in providing intelligence and identifying troublemakers.

But a spokesman for the Met has admitted that the offer was turned down, a move which the Sunday Express has learned surprised and shocked the Hungarian authorities.

South Thanet Conservative MP Craig Mackinlay, who chairs the All Party Parliamentary Group for Hungary, described the decision as “bizarre” and said that it raised further questions about the Met Commissioner Cressida Dick.

He said: “As the chairman of the APPG for Hungary I work closely with the Ambassador to the UK across many issues.

“The Hungarian government recognises the problem that it has with its football fans and the fact that it offered to send police to monitor and manage possible unruly and racist conduct, which subsequently occurred, offers an insight into their commitment to prevent such unacceptable behaviour.

“The fact that such an offer was turned down by the Met police is bizarre; my motto is to accept help wheresoever it is offered. The Commissioner once more has questions to answer about policing in London.”

Ms Dick has already been strongly criticised for her failure to tackle climate change activists and Black Lives Matter protesters who have brought the capital to a halt.

She has also overseen a dramatic rise in knife crime and deaths.

Tory MPs were furious when her term as Commissioner was extended for two years believing that she should be replaced.

Explaining the decision to not allow Hungarian police officers to come with the fans, a spokesman for the Metropolitan Police said: “Essentially, the Hungarian authorities informed us that only 150 supporters from Hungary would be travelling to England.

“With such low numbers travelling in, it was not necessary to call upon their policing assistance. The rest of the Hungarian fans that attended Wembley reside in the UK.”