Home » Politics » Eight-Hour Waits. Machine Glitches. Why Early Voting in Some States Has Had a Rough Start.

Eight-Hour Waits. Machine Glitches. Why Early Voting in Some States Has Had a Rough Start.

The hurdles to early voting in places like Georgia and Texas resulted from a combination of intense voter interest that stressed local capacity and the sort of messiness long common to American elections. 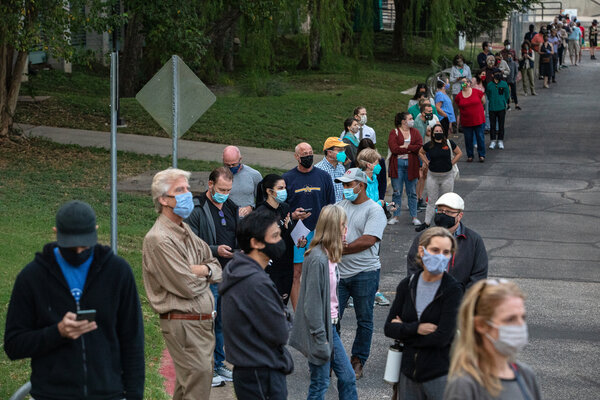 Virginia’s online voter registration portal crashed on the final day it was available when roadside utility workers cut the wrong cable. Texans waited in long lines on the first day of early voting in their state’s biggest cities, and in one county in the Houston suburbs, a programming error took down all of the voting machines for much of the morning. On Georgia’s second day of early voting, long lines again built up at polling places in the Atlanta suburbs.

The hurdles to early voting on Tuesday resulted from a combination of intense voter interest that stressed the capacity of overwhelmed local elections officials and the sort of messiness that has long been common in American elections and which is now under a microscope as concerns over voter suppression and the unprecedented dynamics of voting during a pandemic collide.

The long lines in Georgia and Texas illustrate how eager voters are to cast ballots in the 2020 election — particularly, but not only, in Democratic-trending urban and suburban areas. By 2 p.m. on Tuesday, Harris County, Texas, which includes Houston, had smashed its first-day early-voting turnout record. In Gwinnett County, Ga., north of Atlanta, even with the long lines there was a 450 percent increase in first-day early voting compared with 2016, according to Ryan Anderson, who tracks Georgia voting data on the Georgia Votes website.

In Virginia, which opened in-person early voting last month, Tuesday was the final day to register to vote. But the state’s online voter registration portal went down early in the morning, cutting off access both online and in local registrars’ offices.

The website crashed after a fiber optic cable was cut just south of Richmond, according to the Virginia Information Technologies Agency, which handles the state’s cybersecurity. In a news conference, Gov. Ralph Northam said the cable was “inadvertently cut during a roadside utilities project.”

Mr. Northam, a Democrat, said that he did not have sole authority to change the voter registration deadline but that he would support a legal effort to ask a judge to extend the deadline.

“We’re looking at all of our options,” Mr. Northam said. “As governor, I don’t have the authority” to alter the deadline.

In Texas, the first day of early voting brought long lines in the state’s major urban centers, with hourslong waits in San Antonio. Officials attributed the long lines to high turnout, as well as ballots that require more time to fill out. A change in state law forbidding straight-ticket or one-punch voting means voters can no longer choose a party’s entire slate with one mark but must manually select each candidate on the ballot.

“They haven’t had one complaint on the machines,” said Judge Nelson W. Wolff, the executive of Bexar County. “It’s just a huge turnout.”