MPs will also be recalled to Parliament on Wednesday to vote on the new measures. The Commons was not originally due to sit until next Monday having already been forced to hold an emergency sitting last week to vote on the Brexit trade deal with the EU before the end of the transition period on December 31.

A No10 spokesman said: “The spread of the new variant of COVID-19 has led to rapidly escalating case numbers across the country.

“The Prime Minister is clear that further steps must now be taken to arrest this rise and to protect the NHS and save lives.

“He will set those out this evening.”

Coronavirus infections across the UK have spiralled out of control in recent weeks, with the country recording 54,990 new cases yesterday. 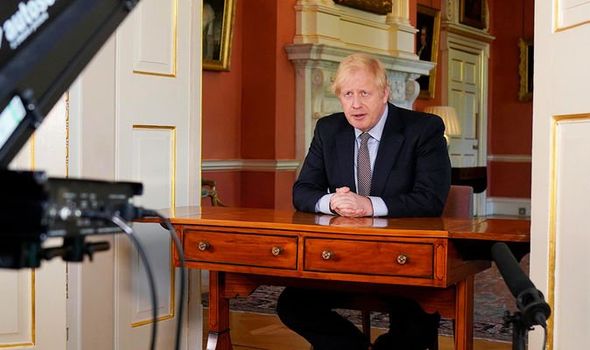 It marked the sixth day in a row Britain has registered more than 50,000 new Covid infections.

Earlier today No10 played down suggestions Boris Johnson would address the nation tonight.

But pressure has been mounting on the Prime Minister to take urgent action following the surge in cases.

He said: “It’s no good the Prime Minister hinting that further restrictions are coming into place in a week or two or three.

“That delay has been the source of so many problems.

“That has to be the first step to controlling the virus.”

She said Scots would be legally required to stay at home for January from midnight and schools would be shut.

This morning the Prime Minister admitted the country faced “tough, tough” weeks ahead and there was “no question” restrictions would be tightened.

While visiting Chase Farm Hospital in north London he said: “If you look at the numbers there’s no question we will have to take tougher measures and we will be announcing those in due course.”