French President Emmanuel Macron is preparing for a climbdown on his hardline demands for access to Britain’s coastal waters, it has emerged. In private meetings with fishing industry chiefs, the government have hinted at a possible compromise in the wrangling over an EU-UK future relationship pact. Ministers said fishermen should brace for impact after the end of the post-Brexit transition period on December 31.

After the meeting, Fishermen Jerome Vicquelin said: “I was rather blunt and said: ‘It’s all well and good you came, but I’m worried because…just a 10-15% cut in turnover… would be a disaster over the long term.

“They were blunt too. They said it won’t be the same as before. For me it’s clear, they just want to try to limit damages as much as possible.”

Publicly President Macron has warned he would not accept a Brexit deal that “sacrifices our fishermen”. 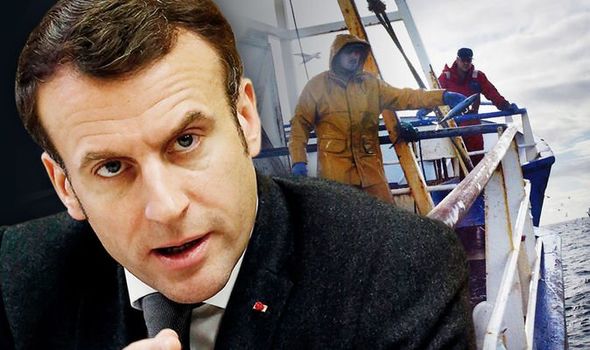 But after last week’s EU summit in Brussels, he conceded no deal would mean losing all access to British waters.

He said: “If there is no deal, European fishermen will have no access to British waters whatsoever. That is the reality.

“If there is a deal, will the situation be the same as it is today? No, that’s for sure.”

France has a total of 20,000 fishermen, including an extra 10,000 people working in fish processing jobs.

A fourth of France’s catch in the northeastern Atlantic was in British waters, according to a recent French parliament report.

But Brussels sources signalled Mr Macron was still ready to force through a no-deal Brexit unless he can secure sufficent access to the UK’s coastal waters for his fishers.

He said: “We thought the end of October was the final deadline. We are giving ourselves a few more days to give the negotiations a chance, but we need to know quickly

“Michel Barnier has several days ahead of him where he is going to negotiate and then he will talk to us. He is going to tell the head of state and government of the EU27: ‘Here is a deal, and I think it is a good one’ – and then we have to evaluate it.

“Or: ‘I think the British have not shown sufficient movement to reach an agreement that protects our interests and then it’s no deal.’”