For McCarthy and McConnell, Two Paths on Trumpian Crisis Management

WASHINGTON — The two men now leading the Republican Party usually align during political crises. But the Trumpian chaos splintering the G.O.P. is not only testing Kevin McCarthy, the House minority leader, and Mitch McConnell, the Senator minority leader — it’s also highlighting their differences in how to handle the former president and hampering a united strategy for retaking Congress next year.

A 24-hour period this past week illustrated Mr. McCarthy’s challenge. In a conference call on Wednesday, he instructed House Republicans to “cut the crap,” according to two officials who participated. While he didn’t specify what he had in mind, there were plenty of options, from Republicans’ trying to punish Representative Liz Cheney for voting to impeach former President Donald J. Trump to the extremism of Representative Marjorie Taylor Greene, the QAnon devotee whose paper trail of conspiracy mongering keeps growing.

Then on Thursday, Mr. McCarthy made a pilgrimage to Mar-a-Lago to meet with Mr. Trump and declare that the former president was “committed to helping elect Republicans in the House and Senate in 2022.” Hours later, two of Mr. Trump’s most enthusiastic lieutenants, his eldest son and Representative Matt Gaetz, used a rally in Wyoming to highlight one Republican they’re committed to helping elect next year: whoever challenges Ms. Cheney in her primary.

For Mr. McConnell, the path to reclaiming the majority decidedly does not go through Mr. Trump. Mr. McConnell and other prominent Senate Republicans have stopped speaking to Mr. Trump and fear that if he retains control over the G.O.P. it will lead to the opposite outcome from the one Mr. McCarthy foresees: disaster in party primaries and losses in key Senate races like those in Pennsylvania and Arizona.

Mr. Trump may be off Twitter and on the golf course, but even in his political afterlife he is complicating life for Republicans in Washington. Just over a week since he left office, a president who took little interest in the intricacies of Capitol Hill politics while in office is wreaking havoc on the House and Senate G.O.P. caucuses, slowing the party’s attempt to unify in opposition to the Democratic-controlled capital.

While few Senate Republican leaders are eager to follow Mr. McCarthy and join Mr. Trump for a photo opportunity, they so far have not been able to extricate themselves from the former president. The impeachment trial, which begins Feb. 8, and the growing debate over whether the Senate should at least censure Mr. Trump is setting the stage for a Trumpian loyalty test in the same chamber that was ransacked by a violent mob earlier this month.

On this front, the two Republican leaders have taken very different approaches but have still managed to irritate their colleagues. Mr. McConnell’s hope that the Capitol riots would present an opening to purge Mr. Trump from the party was dismissed by the bulk of Senate Republicans, and he has vexed those in his caucus by not offering them any guidance in private on how to handle the upcoming trial. Mr. McCarthy, for his part, has prompted eye-rolling among House Republicans by all but broadcasting his inner monologue as he veers between criticizing and defending Mr. Trump and Ms. Cheney. 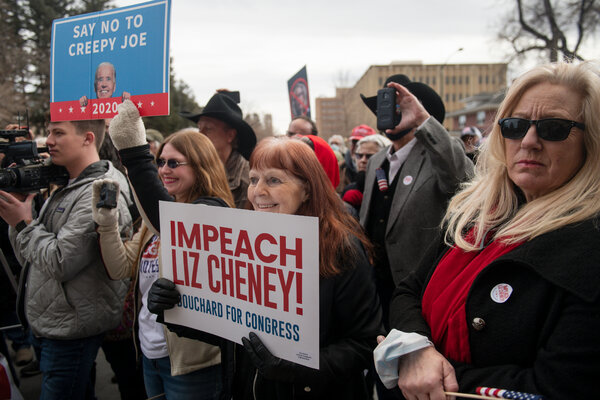 Taken together, the two leaders’ drama has thrust a dilemma before lawmakers that many of them dread — whether to, in defeat, continue embracing Mr. Trump and a demagogic style of politics that delights millions on the right but cost Republicans control of the White House and Congress.

“There are certain elements of the party that are not ready to move on, not ready to say that Donald Trump lost,” said Senator Lisa Murkowski, one of only five Senate Republicans who voted against a motion to declare the impeachment trial unconstitutional. “That’s a problem.”

Many establishment-aligned Republicans, including some in the party’s donor class, agree and have pressured congressional leaders to distance themselves from Mr. Trump. In another trip to Florida last week, Mr. McCarthy told a group of contributors he was upset the president hadn’t moved more quickly to stop the attack on the Capitol, according to a Republican familiar with the conversation.

Ms. Greene, the freshman Georgia lawmaker who is under fire for her years of making hateful and bizarre comments, believes the problem is old-guard Republicans who won’t recognize what she believes is the new reality.

“The vast majority of Republican voters, volunteers and donors are no longer loyal to the G.O.P.,” she said this month. “Their loyalty now lies with Donald J Trump.”

The vast majority of congressional Republican lawmakers fall somewhere in between Ms. Murkowski and Ms. Greene — uneasy about bowing to Mr. Trump in perpetuity but equally unwilling to cross the party’s grass roots by partaking in any effort to drive him from the G.O.P.

As has been the case since the president’s election in 2016, the answer for dozens of G.O.P. members of Congress is to vote with their feet and retire. This week, Senator Rob Portman of Ohio announced he would do just that in 2022, sending many Republicans into a deeper state of dismay.

“I’ve been in Republican politics for 40 years professionally — so, just after Watergate — and I will tell you this has been the worst period of the entire time,” said Representative Tom Cole of Oklahoma, a longtime friend of Mr. Portman’s.

That is particularly true for Republican leaders in the two chambers of Congress.

Since December, Mr. McConnell has dealt with the retirement of his closest colleague, Senator Lamar Alexander; he has been blindsided by Mr. Portman’s decision; his wife, former Transportation Secretary Elaine Chao, quit the Trump administration in protest; and, after he watched his beloved Senate being desecrated, the bulk of Senate Republicans dismissed his attempt to use the moment to purge Mr. Trump.

That Mr. McConnell could not rouse more of his colleagues to condemn Mr. Trump, and perhaps bar him from seeking office again, is his own fault, some Republicans say. He made no attempt to lobby Republican senators, telling them only that the impeachment trial would be a vote of conscience.

Some Republicans, like Senator Mike Rounds of South Dakota, who had harshly criticized the former president after the Capitol attack, began to change their tone once it became clear that their constituents were unbothered by Mr. Trump.

“He may very well be a spokesperson for the conservative movement in the future,” Mr. Rounds said a few hours before the vote. Less than two weeks earlier, Mr. Rounds mused to the Forum News Service that Mr. Trump could be criminally charged with inciting the attack in a way that could “stop him for running for election to a public office again” and said that “history will hold him accountable.”

In the interim, Senator Lindsey Graham of South Carolina mounted a near-daily public defense of the former president while also organizing his legal team.

But these sorts of pronouncements, and Mr. McConnell’s decision to side with the members of his caucus looking to derail the trial of the former president, have left the small number of Senate Republicans who will publicly criticize Mr. Trump in despair.

From Riot to Impeachment

The riot inside the U.S. Capitol on Wednesday, Jan. 6, followed a rally at which President Trump made an inflammatory speech to his supporters, questioning the results of the election. Here’s a look at what happened and the ongoing fallout: