Home » Politics » For Some, Afghanistan Outcome Affirms a Warning: Beware the Blob

For Some, Afghanistan Outcome Affirms a Warning: Beware the Blob

The chaotic withdrawal from Afghanistan exposed the shortcomings of views within the foreign policy establishment, also known as ‘The Blob.’ 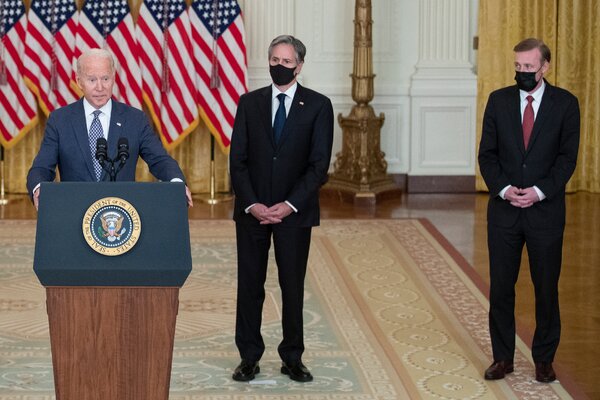 “‘The Blob’ turns on Jake,” Alex Thompson and Tina Sfondeles wrote in Politico, referring to President Biden’s national security adviser, Jake Sullivan. And then: “I’ve got to say hats off to the Blob on this whole Afghanistan thing,” the commentator Matthew Yglesias said sarcastically on Twitter. “They couldn’t achieve any of their stated war aims, but they’ve proven they can absolutely wreck you politically.”

What is this Blob of which they speak? What does it have to do with the Taliban takeover of Afghanistan and whether they can actually govern? And why, like the nebulous malevolent organism in the 1958 horror film with which it shares a name, is it perpetually lurking around, sucking up everything in its path?

The term “Blob” is generally understood to describe members of the mainstream foreign-policy establishment — government officials, academics, Council on Foreign Relations panelists, television talking heads and the like — who share a collective belief in the obligation of the United States to pursue an aggressive, interventionist policy in the post-9/11 world. The wars in Iraq and Afghanistan are seen in this context as Blob-approved.

This foreign-policy philosophy has its origins in the post-World War II view of American exceptionalism, epitomized by officials like Dean G. Acheson, that U.S. military intervention in foreign conflicts was vital to defending American interests and generally did more good than harm. To the extent that the Blob holds this view, the Afghanistan withdrawal was a defeat for its position. For Blob critics, it was more fodder for discussing why the Blob gets things so wrong.

“Coming out of Afghanistan was a rebuke to, or the swan song of, the neoconservative approach, which had its heyday during the Iraq war,” said Vali R. Nasr, a professor of Middle East studies and international affairs at the Johns Hopkins School of Advanced International Studies. “After the first Iraq war, the United States developed a sense that the U.S. could basically engage in war, and help shape outcomes internationally, at little or no cost.’’

Former President George W. Bush positioned “a group of ragtag terrorists as America’s great strategic rival and an existential threat to the United States,” Mr. Nasr continued. “Even though the effort failed early on, it continued unimpeded and became fundamental to the Blob’s thinking post-9/11.”