Home » Politics » For Trump and the Nation, a Final Test of Accountability

For Trump and the Nation, a Final Test of Accountability

WASHINGTON — Barely 11 months after President Trump was acquitted in a momentous Senate trial, the nation now confronts the possibility of yet another impeachment battle in the twilight of his presidency, a final showdown that will test the boundaries of politics, accountability and the Constitution.

No president has ever been impeached for high crimes and misdemeanors twice. But Speaker Nancy Pelosi was weighing bringing a new article of impeachment to the House floor as early as Monday charging Mr. Trump with “incitement of insurrection” for encouraging the mob that ransacked the Capitol to disrupt the solemn process finishing his own election defeat.

If Ms. Pelosi decides to proceed, the House could approve the article in days, this time with even some disaffected Republicans joining the Democratic majority to send the matter to the Senate for a new trial unlike any of the previous three in American history.

While it seemed unlikely that 17 Republicans in the Senate would go along with Democrats to reach the two-thirds necessary for conviction, the anger at Mr. Trump was so palpable that party leaders said privately it was not out of the question.

The fresh bid to remove Mr. Trump from office and strip him of his power without waiting until his term expires on Jan. 20 capped a traumatic week that rattled Washington more than any since the terrorist attacks of Sept. 11, 2001.

Emotions were raw. The White House was in meltdown. The military was on edge. The cabinet was in revolt. The Republican Party was in civil war. And the president was in hiding, stripped of his social media bullhorn, ostracized by his allies and at odds with almost everyone including his loyal vice president.

The storming of the Capitol by Mr. Trump’s supporters that left five people dead, among them a police officer, transformed the politics of the city in ways that were still hard to measure. A new impeachment would be more than a do-over of the drive that failed last year because this time the crime was not a phone call to a foreign leader captured on the dry pages of a transcript but the siege of American democracy played out live on television for all to see.

“Insurrectionists incited by Mr. Trump attacked our nation’s Capitol to stop Congress from accepting the Electoral College results,” said Representative Ted Lieu of California, who began drafting the article of impeachment while sheltering during the Capitol takeover and sponsored it with Representatives David Cicilline of Rhode Island and Jamie Raskin of Maryland, two fellow Democrats. “People died. We cannot just issue sternly worded press releases as a response. Unless Trump resigns, Congress must impeach to hold him accountable.” 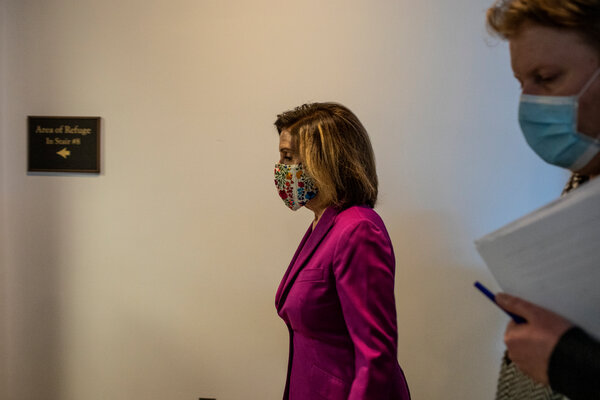 Yet the timing of such an effort, with just 11 days until Mr. Trump is to leave office, scrambled the equation. Senator Mitch McConnell of Kentucky, the Republican leader, indicated that under Senate rules a trial could not begin until Jan. 19, the day before President-elect Joseph R. Biden Jr.’s inauguration, meaning the process would not advance quickly enough to avert any feared dangerous moves in Mr. Trump’s last days in power.

That raised the prospect of conducting a trial after Mr. Trump vacates the White House, overshadowing the opening days of Mr. Biden’s administration at a time when he would like to turn the page and confront crises like the coronavirus pandemic, which has grown even deadlier while attention has focused on Washington’s political wars. A nationally televised trial could dominate discussion and would prevent other business in the Senate.

Some of Mr. Trump’s critics argued that it would be important to hold a trial even if he is already out of power in order to bar him from ever seeking office again, a penalty envisioned by the Constitution — and perhaps more important, to render a verdict condemning his actions for the sake of history.

“We’ve never had to consider even the possibility of impeaching a president twice, or in the final days of his presidency,” said Michael J. Gerhardt, a constitutional scholar at the University of North Carolina who testified in Mr. Trump’s first impeachment and favors another trial. “But we’ve never had a president before who’s encouraging sedition as Trump has done in his last few days in office.”

Yet even some of the president’s harshest critics worried that a last-minute impeachment and an overtime trial could help him rally supporters by presenting himself as a victim not a villain, allowing him to turn the focus from his own actions to those of his opponents.

“It historically will be important,” said Andrew Weissmann, who was a deputy to the special counsel Robert S. Mueller III and recently published a book, “Where Law Ends,” expressing frustration that the president was not held fully accountable for his actions during the Russia investigation. “But the danger is he is acquitted and the momentum of condemnation now is lost. Plus, until we change the mentality of his base, we have not gotten at the underlying issue.”

At the moment, a strong majority of Americans holds Mr. Trump responsible for the attack, with 63 percent saying he has a good amount or even a great deal of blame, according to a PBS Newshour-Marist poll. But when asked whether steps should be taken to remove him from office as a result, Americans retreated to their partisan corners, with 48 percent saying yes and 49 percent saying no.

A Reuters-Ipsos survey found that 57 percent of Americans want Mr. Trump to leave office right away. But most of them favored removal by Vice President Mike Pence and the cabinet through the disability clause of the 25th Amendment, with just 14 percent calling for another impeachment.

Mr. Trump has few defenders among Republicans for his actions exhorting the crowd before it marched on the Capitol and even some in the conservative news media turned on him, most notably The Wall Street Journal editorial page, which called his actions “impeachable” and urged him to resign.

But in the face of impeachment threats, some Republicans began taking up the fight against his opponents again. They may not like him or believe it is politically viable to be seen as excusing his behavior but are still energized by battling his enemies on the left.

On Sean Hannity’s Fox News program on Friday night, Senator Lindsey Graham, Republican of South Carolina, who was accosted by Trump supporters at an airport for opposing the president’s efforts to overturn the election, was suddenly back to castigating Mr. Trump’s rivals and talking about Hunter Biden.

Mr. Graham focused on Mr. Trump’s video message Thursday calling for healing and reconciliation, a video the president privately expressed regret for making. “Instead of trying to match what President Trump has done, the radical Democrats are talking about another impeachment that will destroy the country even further,” Mr. Graham said.

Still, Mr. Trump might have a challenge finding lawyers to defend him in any trial. Jay Sekulow, his personal lawyer who was a leader of the defense team in the impeachment trial last year, has not participated in Mr. Trump’s legal efforts to overturn Mr. Biden’s election. Pat A. Cipollone, the White House counsel who teamed up with Mr. Sekulow, has been so upset about the Capitol attack that he has considered resigning.

One of the few members of his defense team who said he would stick with the president was Alan M. Dershowitz, a Harvard Law School emeritus professor who had a secondary role last time. In an email on Saturday, he said he would defend Mr. Trump on free speech grounds.

Jonathan Turley, a George Washington University law professor who testified in the House against Mr. Trump’s first impeachment, said the latest drive was a rush to judgment out of partisan anger. The fact that Mr. Trump’s critics have called for him to be removed either by impeachment or the 25th Amendment, he said, showed that they are interested only in the outcome, not the legitimacy of the method.

“This opportunistic use of impeachment would do to the Constitution what the rioters did to the Capitol: leave it in tatters,” Mr. Turley said.

The House voted almost entirely on party lines to impeach Mr. Trump in December 2018 for abuse of power and obstruction of Congress in connection with his effort to pressure Ukraine to incriminate Mr. Biden in wrongdoing while withholding vital security aid. But the Senate acquitted him last February also on a nearly party-line vote.

A second impeachment would in some ways revise how that first one looks in history. Some have argued that focusing on the Ukraine episode was too narrow given Mr. Trump’s many actions violating norms in Washington. Others have said it served as a warning that the president would use his power to cheat in an election, a forecast now borne out.

While there is scholarly debate about whether an official can be impeached or tried after leaving office, there is precedent. When William Belknap, the war secretary under President Ulysses S. Grant, was accused of corruption, he rushed to the White House to submit his resignation minutes before the House impeached him. Lawmakers proceeded anyway and the Senate went ahead and put him on trial, although it acquitted him.

The Constitution specifically provides for the Senate to bar anyone convicted from holding federal office in the future, a secondary penalty that can be approved in a separate vote but requires only a simple majority of 51 senators rather than two-thirds. The Senate has applied this penalty to impeached judges in the past.

“At some point, democracies have to be able to defend themselves,” said Corey Brettschneider, an impeachment expert at Brown University. “The framers probably didn’t give us enough to protect us against a president, but disqualification is one thing they rightly did give us.”