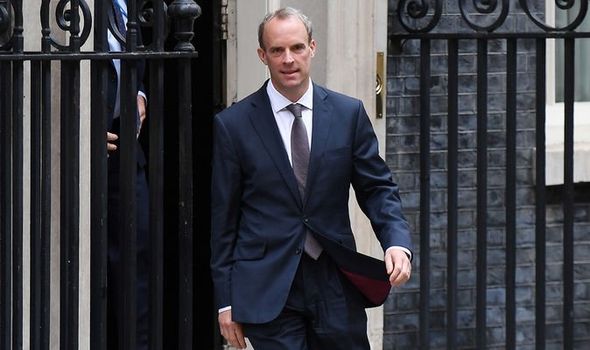 MPs yesterday launched a parliamentary probe into UK policy on the country that descended into chaos after the US and Britain announced they were pulling out troops. It comes two days after Mr Raab, who was on holiday in Crete as the Taliban took over, appeared before the Commons Foreign Affairs Committee.

Its chairman, senior Tory Tom Tugendhat, an ex-Army officer who served in Afghanistan, said yesterday: “The fall of Kabul is a catastrophe for the Afghan people and for the reputation of those nations that were committed to its success.

“Our hasty withdrawal leaves a country in an acute humanitarian and human rights crisis.

“The Afghan people, who we worked alongside for many years, have been left at the mercy of the Taliban, a vicious fundamentalist group.

“While I thank the Foreign Secretary for appearing in front of the committee at late notice, big questions remain and this inquiry hopes to provide some much needed clarity.

“Lessons need to be learnt and the decisions the UK makes in the coming months will be crucial.”

Meanwhile, Mr Raab said the UK and Pakistan had a “shared interest” in securing a stable and peaceful future for Afghanistan.

Mr Raab is on a diplomatic mission to ease the crisis and help secure safe passage for thousands of Afghans left behind after the UK evacuation ended last weekend.

Pakistan is crucial to help people escape Afghanistan because the two nations share a land border.

Mr Raab said: “The takeover, I think it’s fair to say, was faster than anyone anticipated, not just the United Kingdom or Nato allies. And I suspect the Taliban and ordinary Afghans were taken by surprise.”

More than 8,000 eligible former Afghan staff and family members were among the 15,000-plus evacuated by the UK since August 13.

But thousands who helped British efforts and their relatives, as well as other vulnerable civilians, are thought to have been left behind.

Mr Raab repeated the need to “engage” with the Taliban and promised the UK would be “shouldering our humanitarian responsibilities” as Afghanistan’s neighbours fear huge numbers of refugees arriving.