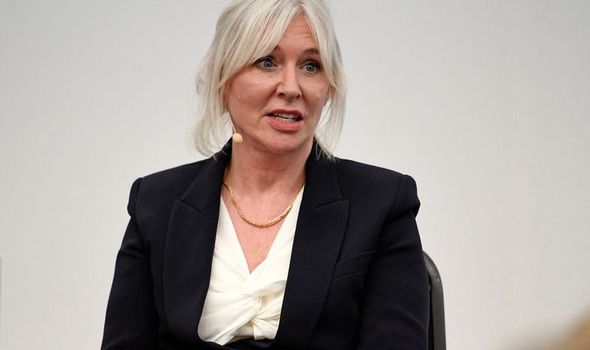 It comes as a group of Conservative backbenchers in the Common Sense Group are attempting to amend the bill to force companies like Twitter and Facebook to be deemed the publisher of anonymous accounts. This would mean that the social media companies would be subject to defamation and criminal laws for anonymous material in the way newspapers and broadcasters are responsible for the material they publish.

A study by the Clean Up the Internet campaign group has revealed that anonymous email addresses are classified as valid identification by Twitter.

The group did its study following claims by Twitter that 99 percent of accounts directing racist abuse on its platform directed at England players like Marcus Rashford, who missed a penalty in the Euro 2020 final, came from identifiable, not anonymous accounts.

The campaign group described the statement by Twitter as “deliberately misleading”.

David Babbs from Clean Up the Internet claimed that by Twitter’s methodology an account called “mickey mouse”, linked to an email address “[email protected]gmail.com” would not count as anonymous.

“In mid-2018, Twitter introduced a requirement that a user gives an email address, or a phone number, and clicks on a link in a confirmation email, or enters a code received in an SMS, to complete the registration.

“All this confirms is that the user has access to the email address, or is able to receive SMSs sent to the phone number. It does not confirm that any of the other information (i.e. name or age) is real.”

“Alternatively anyone can buy a UK sim from a newsagent for about £1, and use it to register via phone number – this is a bit more hassle and time-consuming than creating a fake email address, but is totally anonymous and totally worth it for more committed/ organised bad actors.”

However, a Twitter spokesman insisted that the company “is deeply committed to keeping people safe online, and to protecting a free and Open Internet”.

He added: “As we have previously stated, 99 percent of the permanently suspended accounts from the tournament were identifiable.

“At Twitter, we are guided by our values, and never more so than when it comes to fundamental issues like identity.

“We believe everyone has the right to share their voice without requiring a government ID to do so.

“Our approach in this space has been developed in consultation with leading NGOs – while pseudonymity has been a vital tool for speaking out in oppressive regimes, it is no less critical in democratic societies.”

The online hate legislation is due to be debated in Parliament in the new year.