Conservative chairman Amanda Milling said the result is on a knife edge and urged voters to turn the constituency blue for the first time. Polling put the party on 50 per cent – 17 points ahead of Labour in a seat it has held since it was created in 1974. Losing one of the few heartlands Jeremy Corbyn clung onto would throw successor Keir Starmer’s leadership into crisis.

But Tories were deeply cautious about the poll prediction and insist they are battling for every vote in the last 24 hours of campaigning.

Ms Milling said: “We are under no illusion of the fight on our hands – Hartlepool has been a Labour seat since it was created in 1974.

“The people of Hartlepool deserve a strong Conservative voice who will deliver for them but it’s on a knife edge so get out and vote Conservative.”

The Cabinet minister said Hartlepool candidate Jill Mortimer will help transform the area after 57 years of being “let down” by Labour. 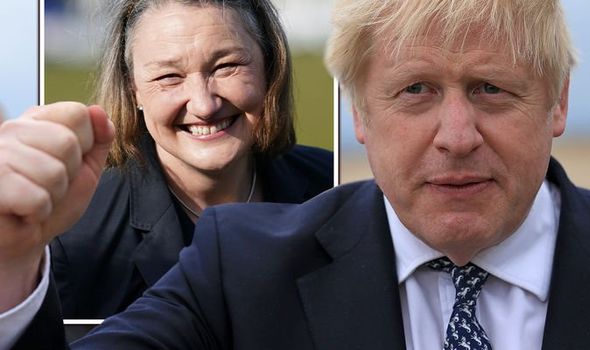 “The only poll that matters is the one on Thursday 6th May,” Ms Milling said.

“Jill Mortimer is fighting tooth and nail to deliver the change for the people of Hartlepool after being let down by Labour for 57 years.

“Jill Mortimer offers the people of Hartlepool a plan for change, but the only way to get that change is to vote Conservative on Thursday.

“Since the people put their faith in the Conservatives in 2019 we have shown that we can deliver. We got Brexit done, we’re investing more in our NHS, putting more police on our streets, attracting investment and creating jobs.”

Hartlepool remained red in 2019 as neighbouring areas backed the Conservatives for the first time.

Mr Johnson hit the campaign trail in the constituency on Bank Holiday Monday and told Conservative supporters that night that taking the seat would be a “massive, massive challenge” but he is “fighting for every single vote”.

“I want to stress that a lot of people are talking about Hartlepool – I have just been there,” he said.

“I think it’s important for people to understand this is not a seat that Conservatives have ever held.

“This is the stamping ground of Peter Mandelson.

“It’s very important for everybody to be aware of the deep psephological reality, it’s a massive, massive challenge, it would be a quite extraordinary thing in my view if that were to happen [a Conservative majority] – but that doesn’t mean that we’re not fighting for every single vote.”

The poll carried out by Survation for Good Morning Britain put the Conservatives on 50 per cent and Labour on 33.

Boris Johnson had an overall favourability rating of 23 points compared to minus 18 for Sir Keir.

Mr Johnson was backed as the best prime minister by 56 per cent compared to 33 per cent for the Labour leader.

The survey results were based on a small sample of just 517 Hartlepool residents who were largely interviewed before the row over Mr Johnson’s Downing Street flat redecoration took hold.

But bookmakers slashed odds on Sir Keir being out of his job by the end of the year to 4-1.

Separate polling put the Tories on track to hold to key mayoral roles Labour has been eyeing up.

The Opinium surveys predicted Andy Street will secure 54 per cent of first preference votes to keep the West Midlands and Ben Houchen holding on to Tees Valley with two thirds of the votes in the first round.

Every voter in Great Britain will have the chance to take part in at least one election tomorrow with 4,650 positions up for grabs.

Millions in England will take part in local, mayoral and police and crime commissioner polls while voters in Scotland and Wales are choosing new ­parliaments.

Governing Westminster parties traditionally see a dip in support in between general elections.

But Sir Keir has refused to commit to gaining any seats in the “super Thursday” vote and yesterday (TUES) admitted he has a “mountain to climb”.

He said: “Well, I hope we won’t lose Hartlepool, we’re fighting for every vote there and I know that every vote has to be earned and that’s why I’ve been in Hartlepool three times in the campaign and we’ve got teams on the ground.

“My job as Labour leader was to rebuild the Labour Party out of that devastating loss in 2019 and put us in a position to win the next general election.

“I said on the day that I was elected that that was a mountain to climb. It is, we’re climbing it and I’ve got a burning desire to build a better future for our country, and Thursday is a first step towards that better future.

“But I don’t think anybody realistically thought that it was possible to turn the Labour Party round from the worst general election result since 1935 to a position to win the next general election within the period of one year; it was always going to take longer than that.”

Sir Keir said he accepts the results will reflect on his leadership.

Director Dennis Reed said “We have been waiting for the reform of social care for far too long.

“Promises have been broken repeatedly and it is about time a political price was paid. We are urging voters across the UK to vote for candidates, and parties, who recognise the urgency in resolving the social care crisis and are prepared to stand up and be counted on the issue.

“Discussion on social care barely surfaced during the last General Election campaign and older votes were taken for granted. We want to make sure that this doesn’t happen again on Super-Thursday”.