Home » Politics » How Is the G.O.P. Angling to Attack Biden?

How Is the G.O.P. Angling to Attack Biden?

As Republicans search for a winning message, they’re trying out strategies both old and new. 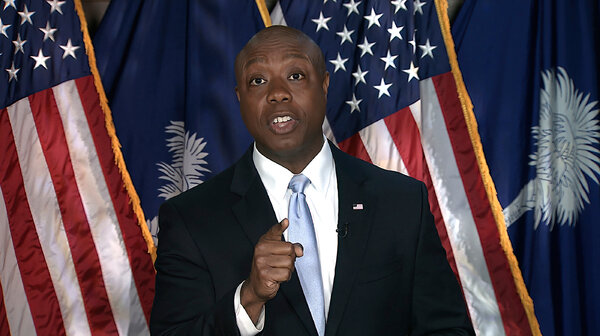 As Senator Tim Scott delivered the Republican Party’s rebuttal to President Biden’s congressional address on Wednesday night, he had a big-picture question to confront: Where will the party go, in a time when it is split between two factions?

His speech suggested that, at least officially, it is hewing to a fairly consistent message based on old customs and trusted conservative arguments.

“Republicans can’t figure out whether to walk or run — to Trump or to Reagan,” Carlos Curbelo, a former Republican congressman from Florida, said in an interview. “With Tim Scott, that was certainly a Republican response from 2012 or 2009.”

Scott’s 15-minute rebuttal hit a number of notes that will be familiar to any longtime observer of conservative messaging: In particular, as Republicans prepare for a showdown over Biden’s next big agenda items — a $2.3 trillion infrastructure bill, and the $1.8 trillion American Families Plan that he unveiled on Wednesday — they are fixating on the outsize nature of his proposals, labeling him a “tax-and-spend liberal.” They’re criticizing his willingness to pass them without Republican support, despite a campaign promise to seek bipartisanship.

And they’re stirring up racial resentments, possibly in hopes of retaining some of the familiar cultural notes that President Donald Trump struck during his term, without committing the party to all-out Trumpism.

Chuck Coughlin, a G.O.P. strategist in Arizona, has been closely watching the state of play ahead of a critical Senate race there next year. He said the party seemed to be stuck in a holding pattern.