This is the Impeachment Briefing, The Times’s newsletter about the impeachment investigation. Sign up here to get it in your inbox.

Welcome to the Impeachment Briefing.

Yes, we’re back. Just over a year after House Democrats impeached President Trump, they’re poised to do it a second time — a first in American history.

Margaret Kibben, the chaplain of the House of Representatives, opened a day of business Monday morning with this prayer:

“The events of last week — the destruction, the damage, and the deaths of our fellow Americans — are deeply disturbing. The seeds of discontent were sown across our country, and we have reaped the whirlwind. Almighty God, speak into this storm.”

Unlike 2019’s impeachment, which centered on a scheme to pressure Ukraine to announce investigations into Mr. Trump’s political rivals, this potential impeachment is taking place at the scene of its charge: the Capitol, invaded by a pro-Trump mob incited by the president, who minutes earlier had evoked violent imagery as he implored an angry crowd to “fight” the election results. A Capitol Police officer and at least four others died.

The speed of 2021’s impeachment of Mr. Trump will most likely be extraordinary, occurring in just a matter of days, without any significant investigation, hearings or public debate. Democrats are already preparing a lengthier impeachment report documenting Mr. Trump’s actions and the destruction that followed to accompany their charge.

What happened today, and what comes next

House Democrats introduced a four-page article of impeachment against Mr. Trump for “incitement of insurrection.” With more than 210 co-signers, lawmakers said they were confident they had the votes to proceed. As many as a dozen Republicans are said to be considering joining Democrats to impeach, including Representative Liz Cheney of Wyoming, the No. 3 House Republican.

But first: The House is scheduled to vote on Tuesday evening to formally call on Vice President Mike Pence to invoke the 25th Amendment, in which he would declare “president Donald J. Trump incapable of executing the duties of his office and to immediately exercise powers as acting president.”

Assuming Mr. Pence declines, as he has already indicated he would, the House will begin debate on the impeachment resolution Wednesday morning, heading toward an evening vote.

When the House would deliver the article to the Senate for a trial is uncertain. History gives little guide on the question of whether a president can be impeached once he leaves office, and House lawyers are racing to understand the legal and constitutional issues.

President-elect Joseph R. Biden Jr. said on Monday that he had consulted with lawmakers about the possibility they could “bifurcate” the proceedings, with half of each day spent on the trial and half on confirming his Cabinet and other nominees.

What does the impeachment article say? 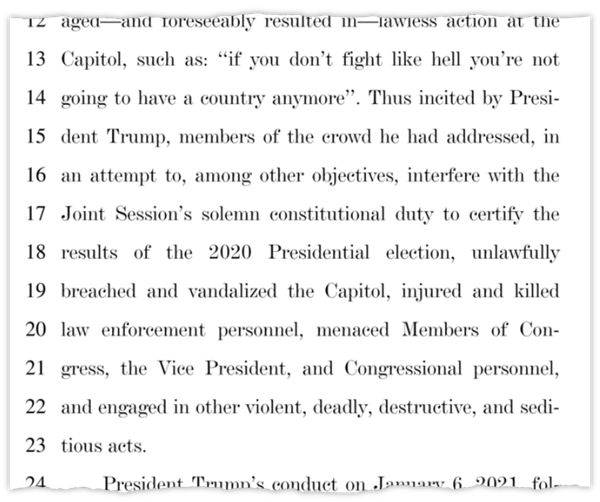 The impeachment article charges Mr. Trump with “inciting violence against the government of the United States” and encouraging his supporters to obstruct the certification of the election, among other accusations.

The article includes a reference to the 14th Amendment, the post-Civil War addition to the Constitution that prohibits anyone who “engaged in insurrection or rebellion” against the U.S. from holding future office.

“In all this, President Trump gravely endangered the security of the United States and its institutions of government,” the article reads. “He threatened the integrity of the democratic system, interfered with the peaceful transition of power, and imperiled a coequal branch of government.”

My colleague Charlie Savage analyzed the elements of the speech Mr. Trump gave near the White House last Wednesday that has led to accusations that Mr. Trump incited his followers to riot at the Capitol. He also wrote about whether Mr. Trump has put himself in criminal jeopardy.

Unlike the last impeachment, when Mr. Trump argued that his dealings with Ukraine did not break any laws, several laws clearly make it a crime to incite a riot or try to get another person to engage in a violent crime against property or people. That has been a primary focus of the new push to impeach Mr. Trump again.

Here’s some of the violent imagery Mr. Trump used in his speech:

“Republicans are constantly fighting like a boxer with his hands tied behind his back. It’s like a boxer. And we want to be so nice. We want to be so respectful of everybody, including bad people. And we’re going to have to fight much harder.”

“We will never give up. We will never concede. It doesn’t happen. You don’t concede when there’s theft involved. Our country has had enough. We will not take it anymore, and that is what this is all about."

“We are going to try — give our Republicans, the weak ones, because the strong ones don’t need any of our help, we’re try — going to try and give them the kind of pride and boldness that they need to take back our country.”

Why are Democrats trying to impeach Mr. Trump again?

I talked to my colleague Nick Fandos, who covers Congress and was in the Capitol when rioters stormed in, about Democrats’ strategy this time around.

Nick, why now? And what do Democrats hope to get out of this?

I think the answer to both is one and the same. They are cognizant of the fact that he’s leaving office in nine days, but they feel that this act cannot go unpunished, if not for anything else than the history books. You had members of both parties lying face down in the House gallery with gas masks on preparing for the worst.

The feeling is they want him out immediately — now. They want him to resign, for Mike Pence to invoke the 25th Amendment. But they realize those things probably aren’t going to happen, and impeachment is the only tool wholly within the power of Congress. They’re using the tool in their toolbox.

How can we understand the motivations behind this impeachment?

I have not heard, to this point, any political considerations being made around Trump. If anything, there’s some concern that this will prompt some sort of backlash where Trump becomes a martyr, a cult hero, and he ends up holding stronger influence over American life. But the way that lawmakers are talking about it is much more basic — this is about us and our society, as opposed to Republicans versus Democrats and who could run in 2024.

Do Democrats expect Mr. Trump to be convicted by the Senate this time?

They’re doing it not knowing one way or another. You could plausibly sketch out scenarios where he could be convicted and others where he definitely wouldn’t be convicted. I think they haven’t taken the time to game that out. They feel like they’re in the right trying to initiate the process knowing they can’t control how it ends. But they’re thinking, “We can do our part.”

Is any part of this about forcing the hand of some Republicans and putting them on the record condemning Mr. Trump while he’s still in office?

That’s absolutely a benefit in their eyes. First of all, this kind of buildup to impeachment is about trying to exert as much pressure on Republicans calling on him to resign ahead of time. There’s been some success with Lisa Murkowski and Pat Toomey, two Republican senators who have said as much. There is some kind of collateral benefit for Democrats to put people on the record on how they responded to this in real time.

You wrote the other day that lawmakers are also looking at a provision in the Constitution’s impeachment clauses that could allow them to bar Mr. Trump from ever holding federal office again. What does that mean?

The Constitution says that for somebody who is convicted in a Senate impeachment trial, there can be an extra recourse or punishment on them, which is a disqualification to ever hold federal office, including the presidency, again. You have to convict first, and then it’s actually a lower threshold to do this penalty. It’s only a majority of the Senate. If he were to be convicted, they could see to it that he couldn’t run for office again.

The Impeachment Briefing is also available as a newsletter. Sign up here to get it in your inbox.