An Islamic State affiliate that is a sworn enemy of both the Taliban and the United States threatens a large-scale attack against the mission at the airport. 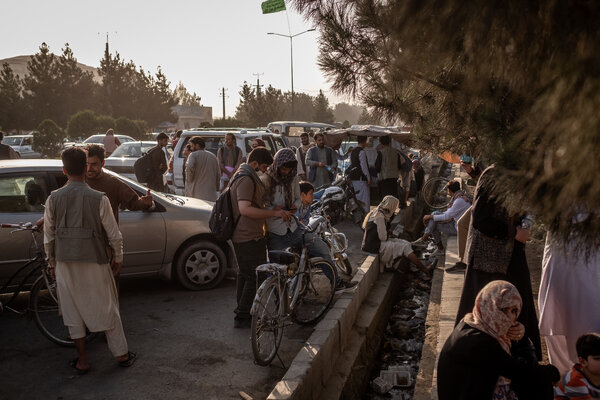 WASHINGTON — The United States has been battling the Taliban and their militant partners in Afghanistan, Al Qaeda and the Haqqani network, for 20 years.

But the biggest immediate threat to both the Americans and the Taliban as the United States escalates its evacuation at the Kabul airport before an Aug. 31 withdrawal deadline is a common rival that is lesser known: Islamic State Khorasan, or ISIS-K, the terrorist group’s affiliate in Afghanistan.

Created six years ago by disaffected Pakistani Taliban, ISIS-K has carried out dozens of attacks in Afghanistan this year. American military and intelligence analysts say threats from the group include a bomb-laden truck, suicide bombers infiltrating the crowd outside Hamid Karzai International Airport and mortar strikes against the airfield.

These threats, coupled with new demands by the Taliban for the United States to leave by Aug. 31, probably influenced President Biden’s decision on Tuesday to stick to that deadline. “Every day we’re on the ground is another day we know that ISIS-K is seeking to target the airport and attack both U.S. and allied forces and innocent civilians,” Mr. Biden said.

The threats lay bare a complicated dynamic between the Taliban, Al Qaeda and the Haqqani network, and their bitter rival, ISIS-K, in what analysts say portends a bloody struggle involving thousands of foreign fighters on both sides.

A United Nations report in June concluded that 8,000 to 10,000 fighters from Central Asia, the North Caucasus region of Russia, Pakistan and the Xinjiang region in western China have poured into Afghanistan in recent months. Most are associated with the Taliban or Al Qaeda, the report said, but others are allied with ISIS-K.

“Afghanistan has now become the Las Vegas of the terrorists, of the radicals and of the extremists,” said Ali Mohammad Ali, a former Afghan security official. “People all over the world, radicals and extremists, are chanting, celebrating the Taliban victory. This is paving the way for other extremists to come to Afghanistan.”

American officials say they are preparing to combat both immediate and longer-term terrorist challenges in Afghanistan. First and foremost is the threat at the Kabul airport.

Jake Sullivan, Mr. Biden’s national security adviser, said on Sunday that the threat from ISIS-K was “acute” and “persistent,” and that American commanders and other officials were taking all possible steps to thwart any attacks.

That includes striking an unlikely accommodation with the Taliban, at least temporarily, not only to allow safe passage to American citizens and Afghan allies to the airport for flights out of the country, but also to actively defend against an ISIS-K attack.

The leaders of the Islamic State in Afghanistan denounced the Taliban takeover of the country, criticizing their version of Islamic rule as insufficiently hard line, and the two groups have fought in recent years.

An attack on the airport, current and former American officials said, would be a strategic blow to both the United States and the Taliban leadership, which is trying to demonstrate that it can control the country. Such a strike would bolster ISIS-K’s stature in the jihadist world, but that opportunity greatly diminishes after the last American Marine or soldier pulls out.