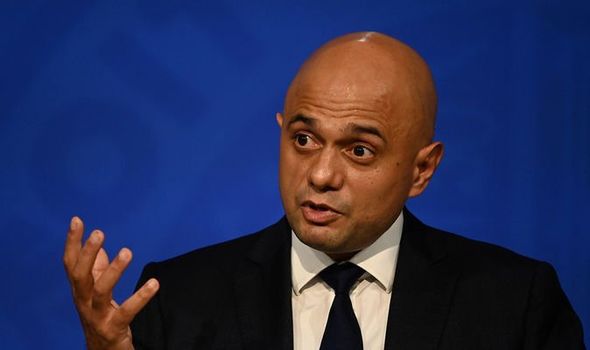 Care home workers in England have already been told they must be fully vaccinated by Thursday.

Mr Javid said around 103,000 staff – eight percent of the entire NHS workforce in England – still haven’t had their first jab, despite being eligible since last December.

It’s not clear exactly how many unvaccinated are frontline or how many are medically exempt.

Another 105,000 domiciliary care workers are still to be fully vaccinated.

But the Government has conceded that the policy could have a “significant impact” on the health and care workforce, with estimates suggesting that only 54,000 unvaccinated staff will take up the offer of a jab as a result of the policy.

The health service already had around 100,000 vacancies before Covid struck, including a shortfall of 10,000 doctors and 35,000 nurses.

Mr Javid told MPs the decision to make Covid-19 vaccinations compulsory for NHS staff does not mean the Government does not recognise concerns about “workforce pressures” this winter.

He added: “Allow me to be clear that no-one in the NHS or care that is currently unvaccinated should be scapegoated, singled out or shamed.

“That would be totally unacceptable. This is about supporting them to make a positive choice to protect vulnerable people, to protect their colleagues. And of course to protect themselves.”

The announcement comes as the Government said a further 262 people had died within 28 days of testing positive for Covid-19 as of Tuesday, bringing the UK total to 142,124.

Separate figures published by the Office for National Statistics show there have been 167,000 deaths registered in the UK where Covid-19 was mentioned on the death certificate.

But figures show Covid cases are continuing to fall with 33,117 confirmed yesterday.

Some 50 million have now had their first Covid jab and almost 46 million people have been double-jabbed while 10.5 million have had a booster vaccination.

“The weight of the data shows our vaccinations have kept people safe and they have saved lives,” Mr Javid added.

The government’s decision follows a consultation which began in September and considered whether both the Covid and flu jabs should be compulsory for frontline NHS and care workers.

Mr Javid said the flu vaccine would not be made mandatory.

Each of the four UK nations makes its own decisions on the issue.

Scotland, Wales and Northern Ireland have not made any proposals to make Covid jabs compulsory for NHS workers or care home staff.

Chris Hopson, chief executive of NHS Providers which represents England’s NHS trusts, said: “We understand why people are vaccine-hesitant. We need to win the argument with them rather than beat them around the head.”

The possibility of losing staff was a “real problem” as the NHS runs on fine margins and already relies on staff to work extra shifts, he added.

Royal College of Nursing chief executive Pat Cullen said: “The vast majority of NHS nursing staff received the Covid-19 vaccine as soon as it was offered, having led the vaccination rollout across the UK and continuing to do so with the booster programme.

“With the five months until this decision takes effect, the Government and employers must continue to engage with the small minority who have chosen not to have the vaccine.”

NHS chief executive Amanda Pritchard said: “The NHS has always been clear that staff should get the life-saving Covid vaccination to protect themselves, their loved ones and their patients, and the overwhelming majority have already done so.

“Working with NHS organisations, we will continue to support staff who have not yet received the vaccination to take up the evergreen offer.”

Matthew Taylor, chief executive at the NHS Confederation, said: “Mandating Covid-19 vaccinations in the NHS offers a further incentive for staff who are eligible but have not come forward yet to get jabbed at time when the virus continues to be a threat and the NHS is working hard to deliver its broader services for patients.

“For this reason, we are relieved the Government has listened to our plea to roll out the requirement away from what is expected to be the most challenging winter on record.”

But UNISON general secretary Christina McAnea warned the move would have “dire consequences” for the health and social care sector.

“Care have employers warned of the dire consequences of a draconian approach,” she said. “The staffing crisis will become a catastrophe for a sector already on its knees.

“Some homes may have to close if care staff are barred from their jobs. The upheaval and distress caused to many elderly residents and their families would be disastrous.

“Forcing the vaccine on care staff is an own goal by the government. Take-up rates will only increase with persuasion, not punishment.”