The former Labour leader demanded Boris Johnson “challenge” Hungary’s Prime Minister for a series of past comments at a bilateral meeting today. Viktor Orban is meeting Mr Johnson at Downing Street for discussions on relations between the two countries.

Hungary’s right-wing leader has a history of making a series of derogatory comments about minorities.

He has made remarks referring to “Muslim invaders” and describing migrants as “a poison”.

Mr Orban has also been accused of anti-Semitism, using the Jewish Hungarian-born billionaire George Soros as a political punchbag.

Ahead of the meeting at No10, Mr Corbyn wrote on social media: “Johnson must challenge Orbán on his government’s Holocaust revisionism, antisemitism and Islamophobia, and physical abuse of detained refugees.” 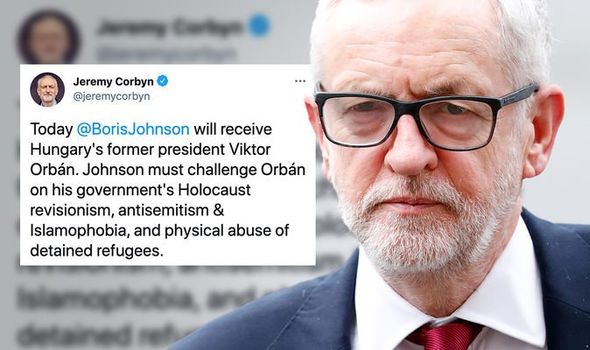 His intervention was ripped apart on Twitter with dozens of Brits pointed out the “irony” of the Islington North MP’s comments.

The Equality and Human Rights Commission released a damning report last year about anti-Semitism in the Labour Party under Mr Corbyn’s leadership.

It found there “was a lack of leadership within the Labour party on these issues, which is hard to reconcile with its stated commitment to a zero-tolerance approach to anti-Semitism”.

It added: “There was political interference in the handling of anti-Semitism complaints.”

Another person wrote: “Not sure Jezza is in any position to suggest challenge to anyone on anti-Semitism. 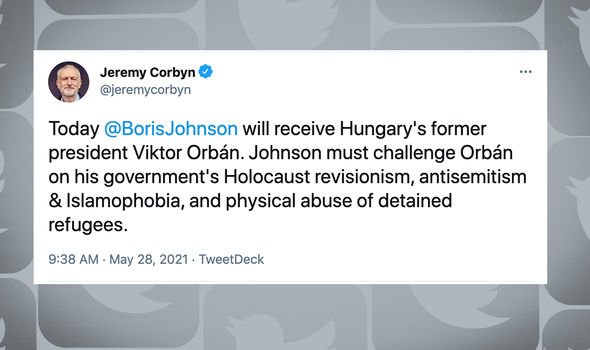 “Your own Jewish MPs left the Labour Party you were leader of due to not feeling safe.”

A third wrote: “Others may rightfully criticise this visit, but you’re in no position to lecture anyone on that topic.”

Meanwhile a fourth joked he should join the bilateral meeting. 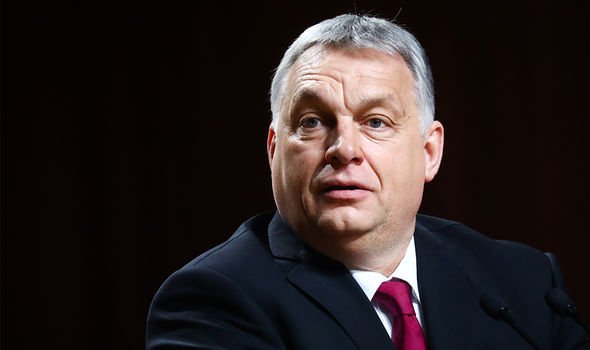 “Maybe you should join and compare notes and tips re anti-Semitism since you’re such an expert,” they wrote.

Someone else said: “A Labour politician tweeting about antisemitism. You have to love Twitter.”

Downing Street condemned as “divisive and wrong” comments made by the Hungarian leader ahead of today’s meeting.

The official hinted human rights abuses would be discussed behind closed doors.

“As president of the Visegrad group of Central European nations later this year, co-operation with Hungary is vital to the UK’s prosperity and security,” he said.

“On all human rights issues we do not shy away from raising them, the PM has condemned those specific comments which were divisive and wrong.”

He said the meeting would “promote UK interests in these areas and discuss issues in the wider region”.