Police swooped in on the anti-Brexit protester in Westminster on Tuesday and seized his amplifiers. Mr Bray was told that under the Police Crime Sentencing and Courts Act, which came into force earlier in the day, he was forbidden from holding a noisy protest within a designated area outside the Houses of Parliament.

Mr Vehofstadt took to Twitter to express “solidarity” with Mr Bray, who is known as “Stop Brexit Man” for using a megaphone to shout “Stop Brexit”.

The Belgian MEP tweeted: “Solidarity with my anti-Brexit friend Steve Bray..targeted for being too “noisy”.

“The latest UK Government approach to protest…trying to cancel it.” 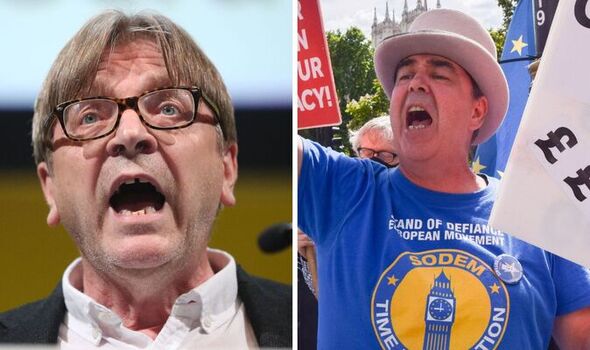 One with the handle Roger_Uk commented: “You love us Guy, but we can’t stand the EU dictatorship. We’re out and we’re not coming back. Good luck and goodbye.”

Another, Atkins1964, wrote: “Perhaps he could spend six years outside your workplace generating noisy positive publicity.”

A third, ENG2Stars1Day, added: “You are welcome to him in Brussels if you like.”

Another with the handle BritUnion said: “Stick to your EU issues Guy and mind your own business.” 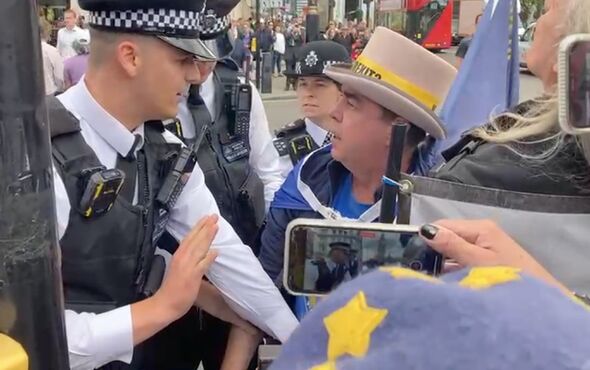 A fifth, LinBibby1, wrote: “Keep your nose out. The guy is a public nuisance though I doubt you can hear him from another country, so butt out!”

However, others welcomed Mr Verhofstadt’s intervention with some thanking the Europhile.

One with the handle BowenThevalerie commented: “Thank you, Guy. We are in a very disturbing place these days. Your support is very welcome.” 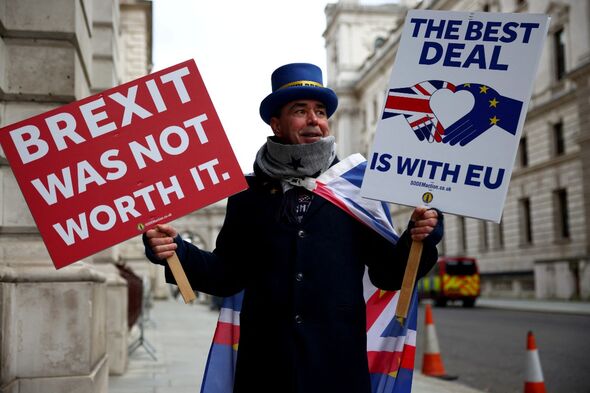 Another, RichardFerris63, posted an EU flag emoji and added: “We will not be silenced.”

The Met Police said Mr Bray, who has vowed to return with amplifiers, was reported over the offence – meaning he will be considered for prosecution.

Mr Bray said: “Under this new law, this fascist law that’s been rushed through Parliament, taking away our rights to protest, they want protesters to just stand there with their hands folded.

“But protest is all about sound and vision, without that you’re not a protest, but they don’t want dissent and they don’t like me.

“The police came along, they said if we carry on they’ll take them away, so I’m carrying on as normal and they seized them.

“I tried to stop them and more and more police officers came and took the amps.

“I’ve been told that I have been summoned and I’ll have to go to court and they’re being held as evidence, I’m gonna elect trial by jury and let’s hope it’s 12 Remainers.”

A Met statement said: “The man was using the equipment in a zone where the use of amplified equipment is prohibited.

“He was spoken to by officers on multiple occasions in relation to specific legislation regarding the use of the amplifying equipment and that it would be seized if he persisted.”