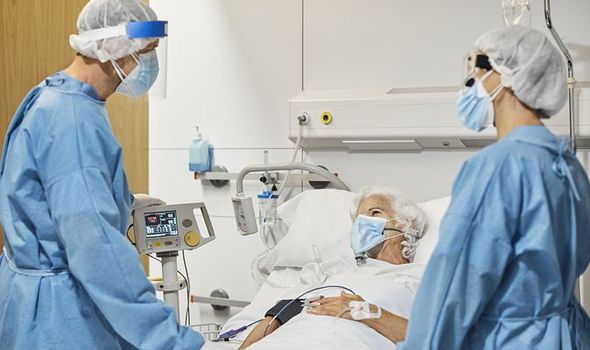 Chris Hopson, the chief executive of NHS Providers, said increasing patient numbers would see “flat out” NHS workers being asked “to perform flexible heroics again”, and warned that the Government “must be ready to introduce new restrictions at pace if they’re needed”. Tory MPs have urged Boris Johnson to “hold his nerve” and not impose any new restrictions, telling him: “Freedom should be at the core of everything we do.”

But Mr Hopson, whose organisation represents health trusts, said the NHS was under “arguably more pressure” compared with this time last year, with absences caused by the virus a key problem.

In a statement on Twitter, he said the NHS was “preparing for worst and hoping for best”.

He said the booster vaccination campaign was “significantly more resource-intensive”, and said staff absences meant the NHS was “beyond full stretch”.

The number of hospital admissions in England are at their highest level since January 2021.

Mr Hopson said infections may have peaked in London before Christmas, but said it was “very unclear” what they would do next.

The warning comes after Health Secretary Sajid Javid stressed that further curbs on personal freedoms must be “an absolute last resort”. He added that the nation is in a “far stronger position” than last year.

Mr Johnson, who is due to review the measures this week, now has to balance calls from his own party against those demanding more restrictions.

The Prime Minister’s grip on the party was shaken last month when he suffered a major rebellion against plans to introduce Covid passes.

His refusal to introduce more restrictions ahead of Christmas was welcomed, with backbenchers praising his “great courage”.

They have now warned that new curbs on freedoms would mean ­crossing a “red line”, with the introduction of “draconian” ­measures leaving him facing a bigger rebellion and even a possible leadership contest.

The pressure on the PM to keep the country open comes as public sector leaders have been asked to plan for worst-case scenarios that could see a quarter of employees off sick.

Options under consideration include bringing in former teachers to schools and volunteers helping deliver public services.

Cabinet Office Minister Steve Barclay warned that the spread of Omicron means “public services will face disruption in the coming weeks” and urged people to “get boosted now”.

In a bid to keep schools open, face masks will be worn in classrooms in years seven and above, and 7,000 air cleaning units will be distributed.

Yesterday, there were 162,572 cases recorded in England, a new daily record. There were also 154 reported deaths.

Mr Johnson’s refusal so far to introduce further restrictions has won him much praise.

It comes just weeks after the disastrous North Shropshire by-election defeat and controversy around alleged Whitehall parties during lockdown. One MP warned that any attempt to bring in further restrictions could result in demands for a leadership contest.

However, the unnamed MP added: “While he’s doing the right thing, MPs might stick with him.”

The MP warned that the ­question of whether the PM can get his premiership back on track and continue in office is “in the balance”.

They said: “It’s scientifically unwarranted and politically impossible for him to lock down.

“He needs to hold his nerve and he needs to do the right thing.”

Another said: “Freedom should be at the core of everything we do and restrictions should only be there if absolutely necessary.”

In Scotland, dancing in nightclubs has been stopped, no more than 500 people can come together for outdoor events and the public have been told not to meet in groups of more than three households.

In Wales, no more than 30 people can attend indoor events and only six people can meet in public places.

He said: “Their overreaction demonstrates their authoritarian controlling nature, and I hope this will be remembered by their electorate. I want to live, and my constituents want to live, in a country where we defend our freedoms, not sacrifice them unnecessarily.”

Craig Mackinlay, the Tory MP for South Thanet, said the PM was right to focus efforts on getting people to have a booster jab rather than imposing restrictions over the Christmas period.

He said: “Given that under any circumstances January and February are months not known for their sociability, I can see no circumstance requiring further restrictions over the weeks ahead.

“My main worry now is the diminution of the workforce either because of a symptomless positive test or the reliance on currently scarce testing availability before returning to work. This will cause many to call for renewed restrictions as NHS staffing numbers come under pressure.”

“We must always remember that Covid is not the only thing harming people at the moment.

“There are unintended ­consequences from lockdowns which have wreaked havoc with people’s mental health, physical health conditions, the economy and livelihoods.

“Unless there is hard data showing definitively that the NHS will be overwhelmed without specific lockdown measures, or that workers in essential public services are unable to report for duty in sufficient numbers, then we cannot support further measures.”

He said: “Boris connects to the voters like no other politician, he really is a grade A star. His ability to reach out and speak to real voters, outside the liberal bubble, is extraordinary.

“Boris is known for achieving what other politicians fail to do, from delivering on Brexit, to restoring pride in our great country. Boris is best when he is out on the stump, speaking to real people up and down the country, and the sooner he is out across our towns and villages the better.

“The party needs to unite behind him, as only with Boris at the helm can we complete our ambitious programme for the United Kingdom.”

Professor Carl Heneghan, director of the Centre for Evidence Based Medicine at Oxford University, said any new restrictions now would be too late to make a difference.

He said: “If they lock down now, it will be not to do with health, but politics. We’ve had the peak of cases and the cases are falling in London.”

Meanwhile, figures have revealed that 132 million jabs were given last year. In the final week of the year alone, 1.6 million boosters were delivered.

Mr Javid said: “The pandemic has been one of the biggest challenges our health service has ever faced and our historic vaccination programme has been vital in ­helping us step up to meet this challenge.

“The 132 million vaccinations in a single year is astounding and a true reflection of the fantastic work of our NHS and its volunteers. I want to thank each and every one of them.

“But we need to make sure people continue to come forward for their jab. As we go into the new year, make sure you get boosted now.”