‘Not a PM stepping away!’ Beth Rigby hints Boris Johnson is gunning for Brussels fight

PM ‘not stepping away from an argument’ says Rigby

Sky News reporter Beth Rigby reflected on the going post-Brexit trade difficulties the EU and UK are having. She noted that Prime Minister Boris Johnson is unlikely to back down to the EU on trade. She noted that Brexit negotiator Lord David Frost has accused the European Union of looking at the trading agreement in the purest fashion.

She also claimed US President Joe Biden will begin to put pressure on the bloc to come to a resolution with the UK.

While speaking to co-host Adam Boulton she said: “I made the point at the beginning of my interview with Mr Johnson, you signed this treaty.

“Lord Frost would say that Brexit trade deal is being applied in the purest fashion. 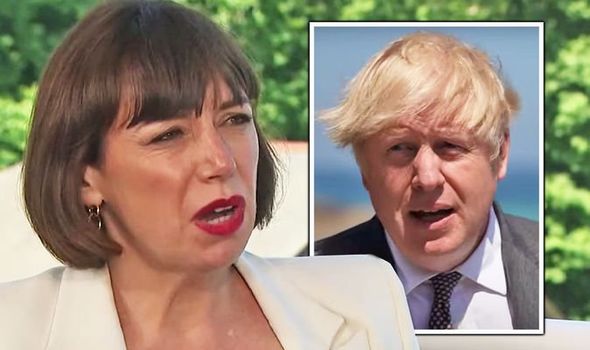 “The EU would say it is not about following it in the purest fashion, it is just legal.

“It is a legal document that you have signed up to and that is the problem.

“The questions is whether they can find compromises.”

Ms Rigby noted that the EU is expecting President Biden to insist they resolve their issues with Great Britain.

She also added Boris Johnson looks prepared to have rows with the EU over this issue.

She continued: “I was told by an EU figure that they think when President Biden goes over next week to NATO, I think he is having a meeting with EU leaders.

“He will also say to them, get everything out of your locker to try and find a compromise.

“I don’t think we are necessarily heading to a trade war, but certainly that was not a Prime Minister stepping away from an argument.”