Home » Politics » ‘Perception Hacks’ and Other Potential Threats to the Election

‘Perception Hacks’ and Other Potential Threats to the Election

In the final days of voting, election officials and cybersecurity experts are keeping a close eye on a range of possible ways foreign governments and other hackers could interfere. 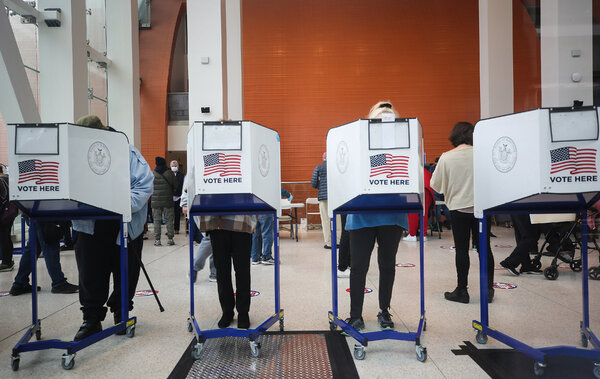 In Georgia, a database that verifies voter signatures was locked up by Russian hackers in a ransomware attack that also dumped voters’ registration data online.

In California and Indiana, Russia’s most formidable state hackers, a unit linked to the Federal Security Service, or F.S.B., bored into local networks and hit some election systems, though it is still unclear why.

In Louisiana, the National Guard was called in to stop cyberattacks aimed at small government offices that employed tools previously seen only in attacks by North Korea.

And on Tuesday night, someone hacked the Trump campaign, defacing its website with a threatening message in broken English warning that there would be more to come.

None of these attacks amounted to much. But from the sprawling war room at United States Cyber Command to those monitoring the election at Facebook, Twitter, Google and Microsoft, experts are watching closely for more “perception hacks.” Those are smaller attacks that can be easily exaggerated into something bigger and potentially seized upon as evidence that the whole voting process is “rigged,” as President Trump has claimed it will be.

The phrase comes up every time Christopher Krebs, the Department of Homeland Security official responsible for making sure voting systems are secure, talks about the biggest vulnerabilities in this election. His worry is not a vast attack but a series of smaller ones, perhaps concentrated in swing states, whose effect is more psychological than real.

Perception hacks are just one of a range of issues occupying election officials and cybersecurity experts in the final days of voting — and their concerns will not end on Election Day.

One theory gaining ground inside American intelligence agencies is that the Russians, having made the point that they remain inside key American systems despite bolstered defenses and new offensive operations by Cyber Command, may sit out the next week — until it is clear whether the vote is close.

The Russian play, under this theory, would be to fan the flames of state-by-state election battles, generating or amplifying claims of fraud that would further undermine American confidence in the integrity of the election process.

The Iranians would continue their playbook, which American intelligence officials see as more akin to vandalism than serious hacking, filled with threats in mangled English.