WASHINGTON — The alarm bells sounded immediately among some progressives when President-elect Joseph R. Biden Jr. released the list of advisers this week who will help him with the transition at the White House’s Office of Management and Budget, which oversees the $5 trillion federal budget and shapes regulations on everything from labor standards to air pollution.

“This puts us at a state of high alarm,” said Jeff Hauser, who runs a liberal group called the Revolving Door Project, which has been pressuring the Biden administration to stay away from not only lobbyists but also individuals coming out of the business world whom Mr. Hauser and other activists call “corporatists.”

His concerns are an early manifestation of a percolating and broader clash between the progressive wing of the Democratic Party and the more establishment members of Mr. Biden’s core team over the role of corporate executives, lobbyists and consultants in the incoming administration.

In a letter sent Thursday, liberal groups pushed Mr. Biden to adopt the sort of sweeping restrictions that his more liberal challengers for the presidential nomination had championed during the primary campaign, urging him not to “nominate or hire corporate executives, lobbyists, and prominent corporate consultants.”

Their views are represented most prominently in the party by Senator Elizabeth Warren of Massachusetts, who has made reining in the influence of corporate America and Wall Street a front-and-center issue for many Democrats.

An early indicator of Mr. Biden’s efforts to navigate this divide will come when he announces ethics rules for his government, a move expected in the hours after his inauguration.

The progressive activists want him to adopt hiring practices that go far beyond policies embraced by former President Barack Obama, who barred officials in his administration from working on issues on which they had lobbied in the past two years.

The Biden transition team did not respond to several requests to comment.

The fight over these rules started quietly over the summer when Mr. Biden’s campaign invited dozens of ethics experts, professors and others, including advisers to Ms. Warren and other members of Congress, to make recommendations about an ethics policy to be issued on Day 1 of a possible administration.

While some argued that the Obama-era lobbying restrictions could hurt a Biden administration’s ability to recruit people with useful expertise, others pushed for tougher restrictions that bar not only lobbyists from being hired, but also corporate executives and consultants who advise companies on getting their way in Washington but do not register as lobbyists.

Progressives started growing concerned about Mr. Biden’s personnel moves even before the election, when he announced his first list of top transition advisers. It included Jessica Hertz, who helped oversee government relations efforts at Facebook, and Avril Haines, who worked at WestExec Advisors and also consulted for the data-mining company Palantir.

Mr. Biden’s first big move — naming Ron Klain on Wednesday as his chief of staff — drew praise from Ms. Warren and some progressive activists. They had worried that Mr. Biden might pick Steve Ricchetti, a close adviser and former pharmaceutical industry lobbyist who served as his chief of staff while he was vice president.

Mr. Klain has corporate ties, too. He has most recently worked with Steve Case, the founder of AOL, in a venture capital firm called Revolution, and he warned in 2015 about the impact that government regulation can have on technology start-ups.

Debates over personnel are common in new administrations, as interest groups and factions of supporters of an incoming president jockey for influence.

But they are likely to be particularly intense in the Biden administration after an election in which the liberal wing of the party suppressed its concerns about what they saw as Mr. Biden’s cautious centrism out of a desire to defeat President Trump. The stakes are heightened further by Mr. Biden’s pledge to differentiate his administration from Mr. Trump’s, in which representatives from corporate America and Wall Street held prominent posts, and conflicts of interest abounded.

Mr. Biden has not always shared the left’s concerns about lobbying. 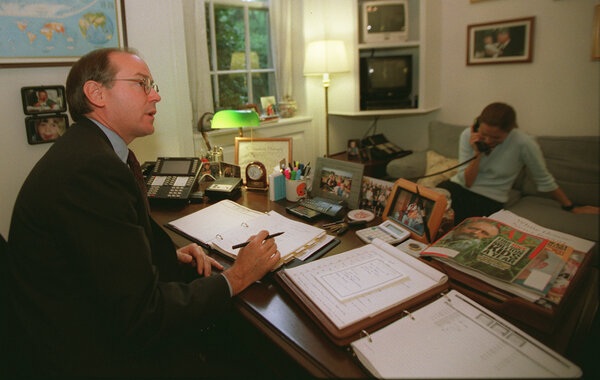 When he was vice president under Mr. Obama, Mr. Biden bristled at the strict lobbying rules, which he contended would deprive their nascent administration of experienced talent.

He specifically balked at an effort by Mr. Obama’s aides to try to block the vice president from hiring Mr. Ricchetti, a well-connected Washington operator who had also lobbied for insurance companies, credit agencies and others. Mr. Ricchetti eventually became Mr. Biden’s chief of staff and continued working with him after the administration ended.

Mr. Ricchetti became the chairman of Mr. Biden’s presidential campaign, and is reported to be in contention for a prominent administration post. Mr. Ricchetti’s brother continues to operate a lobbying firm bearing the family name, which has signed several new clients in recent months.

Several other Biden confidants with ties to Washington’s influence industry worked on his campaign or his transition team. In addition to the team’s Office of Management and Budget review team, those appointed this week to oversee the reconfiguration of other agencies also included a number of people who work for firms that lobby for an array of interests that concern liberals, including oil and pharmaceutical companies.

Mr. Biden pledged during the campaign to adopt strict ethics rules, pointing to broad conflicts of interest he said persisted through the Trump era. He promised a policy that addresses “not only the improper influence of lobbyists, but also any improper or inappropriate influence from personal, financial and other interests” that his appointees might have.

The ethics rules adopted by Mr. Obama in 2009 were considered the most comprehensive in modern American politics. They included for the first time a commitment to ban registered lobbyists from working in agencies they had lobbied in the prior two years, with limited exceptions. The White House also moved to routinely release a list of all visitors, so the public could see what corporate executives and lobbyists were meeting with the president and members of his staff.

But both sides soon found ways to evade these rules. That included off-the-books meetings between lobbyists and White House aides at nearby coffee shops. Other representatives of corporate interests avoided the “lobbyist” stigma — and any restriction on being appointed to a political post — by positioning themselves as so-called strategic advisers. That role allowed them to advise clients about how to exert influence on the government without registering as lobbyists.

Officials from such strategic advisory firms — including WestExec Advisors and Albright Stonebridge Group — are represented on Mr. Biden’s transition team or are expected to play prominent roles in his government.

The firm, which says it does not lobby the U.S. government, represents a range of international clients, including until recently the Switzerland-based mining and commodities trading giant Glencore, which has been the subject of investigations in the United States and around the world related to corruption and other issues.

Cristina Killingsworth, WestExec’s vice president, is on leave from the firm while she works on Mr. Biden’s Office of Management and Budget review team. One of the firm’s co-founders, Antony J. Blinken, a former deputy secretary of state, took a leave in August to run the Biden campaign’s foreign policy operation.

The firm does not name its clients. It has worked with the philanthropy started by Eric Schmidt, the former Google chairman, and with Google’s in-house incubation unit, Jigsaw. On its website, WestExec says its clients include a leading American pharmaceutical company and a multibillion-dollar American technology company that it helped with “safeguarding against trade tensions between the U.S. and China.”

“Those kinds of consulting shops take advantage of weaknesses in current laws, so there is no transparency in their clients and how they are trying to influence public policy for them,” said Danielle Brian, the executive director of the nonprofit watchdog group the Project on Government Oversight. “That’s exactly the kind of people who should not be in an administration.”

Progressive Democrats and advocates for tighter ethics rules have called for years for an expansion of lobbying rules to include strategic consultants, as well as executives who work behind the scenes to help corporations develop lobbying strategies.

Some participants in the ethics policy group assembled by the Biden campaign argued that the administration should widen restrictions on hiring to include not only lobbyists, but also strategic consultants, according to people familiar with the process, who spoke on the condition of anonymity. Others said the administration should ban lobbyists for corporate interests, but allow lobbyists for unions and nonprofit groups.

The Biden transition team’s ethics policy takes a more case-by-case approach, barring participants who lobbied on the issues they have been assigned with overseeing, unless they receive waivers. The list of people appointed by the transition team this week to review agencies includes at least three who were recently registered to lobby for labor unions, as reported earlier by The Wall Street Journal.

The pressure on establishment Democrats is coming from progressives in Congress too, including Ms. Warren and Representatives Alexandria Ocasio-Cortez of New York and Raul M. Grijalva of Arizona.

Liberal political activists are pressing Mr. Schumer to help deliver on their demands, pointedly noting that he is up for re-election in 2022 and could potentially face a primary challenge from a more liberal opponent.

But even some proponents of tighter ethics rules are starting to question if the demands by progressives have gone too far.

“I understand the desire to have people that are ideologically aligned,” said Meredith McGehee, the executive director of IssueOne, a group trying to limit the role of money in politics. “But when you start doing litmus tests on appointees it can backfire. You need to have appointees in the administration who can work with a range of people in Congress or you are not likely to get much done.”