(Reuters) – Atlanta Mayor Keisha Lance Bottoms and U.S. Representative Val Demings of Florida have risen in prominence amid protests against police brutality as Joe Biden weighs whether to choose a black woman as his Democratic running mate for November’s presidential election. 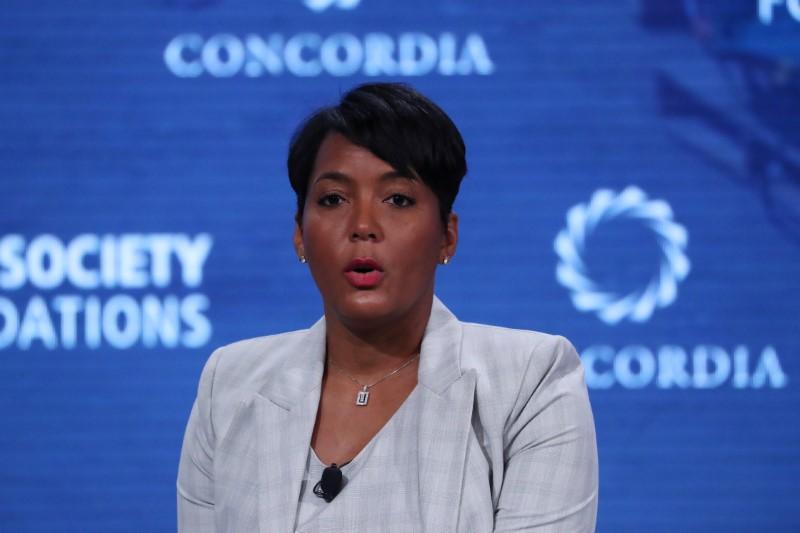 Activists say such a pick would excite disenchanted African-American voters and demonstrate to a crucial part of the Democratic base that Biden is committed to criminal justice reform following the death of George Floyd, who was black, in Minneapolis last week at the hands of a white police officer.

Biden has said Demings, 63, a former police chief of Orlando, is on his short list. On Monday, he praised the leadership of Bottoms, 50, during the unrest that has swept her Georgia city and the country at large. Both women are from politically important states.

“I’ve watched you like millions and millions of Americans have on television of late. Your passion, your composure, your balance, has been really incredible,” Biden said during a roundtable with mayors, including Bottoms.

Bottoms fired two officers over the weekend for excessive use of force on protesters in Atlanta. She has criticized U.S. President Donald Trump’s response to the violence, saying his comments only make the situation worse.

She also urged protesters to go home and not tear apart the city where she was born, saying the “chaos” was not in the spirit of the late civil rights leader Martin Luther King Jr., and was obscuring the message of peaceful protesters.

Bottoms is one of Biden’s strongest backers in Georgia, having endorsed the former vice president in June 2019, early in the Democratic primary. She was a lawyer and judge before becoming mayor in 2017.

In an NPR interview in April, she said she would welcome a place on the Democratic ticket.

“I want Vice President Biden to choose the person who he thinks will help him best beat Donald Trump in November, and so if it’s me, I would be honored,” she said. “But if it’s a green Martian that helps him get over the finish line, then I think that’s who he needs to go with.”

Demings, elected in 2016 as a congresswoman in Florida, has been touted high on the short list despite having only endorsed Biden in March.

She was one of the managers of the House of Representatives impeachment proceedings against Trump but has had a lower profile among voters nationally.

In an interview with Reuters on Sunday, Demings called Trump “incapable of rising to an occasion like this.”

“He’s always looking for something else or somebody else to blame,” she said, echoing sentiments she made in national television appearances in recent days. “He is just not capable of unifying us, bringing us together.”

Demings previously served as the first female police chief in Orlando, during which time the department faced criticism for excessive use of force.

On Friday, as protests over police tactics toward African Americans flared across the country, Demings questioned the actions of her “brothers and sisters in blue” in an editorial in the Washington Post and called for “full and swift accountability”.

“As law enforcement officers, we took an oath to protect and serve,” she wrote. “And those who forgot — or who never understood that oath in the first place — must go.”