Republicans Look to Slash the Size of Biden’s Infrastructure Plan

Working to avoid being cut out of the process, they presented a $568 billion blueprint that is a fraction of the size of President Biden’s proposal. 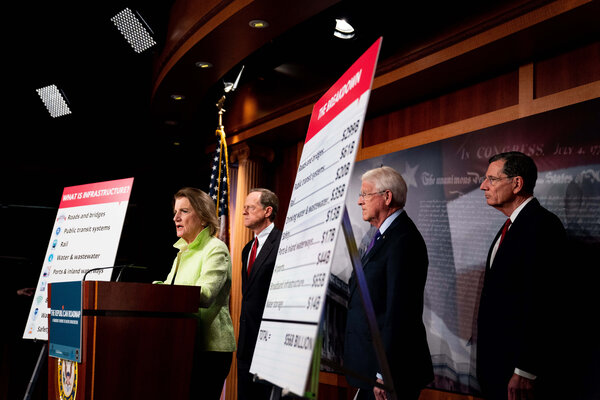 By Emily Cochrane and Jim Tankersley

WASHINGTON — Senate Republicans on Thursday offered a $568 billion counterproposal to President Biden’s $2.3 trillion infrastructure plan, laying out a marker they hoped would kick-start bipartisan negotiations to vastly scale back the president’s plan and do away with the corporate tax increases he is eyeing to pay for it.

But while the White House welcomed the outline as a positive step, there was little sign that Mr. Biden or Democrats in Congress would embrace anything close to a package that many of them dismissed as insufficient for the economy’s needs and an unfair burden on middle-class taxpayers.

Republicans are working to avoid the fate that befell them with Mr. Biden’s first big economic initiative, a nearly $1.9 trillion pandemic relief bill that Democrats pushed through Congress over their vigorous objections, as polls showed it was wildly popular with the public.

Eager to put their party’s stamp on that plan, a group of moderate Republicans trekked to the White House to offer an alternative one-third the size of Mr. Biden’s, and left optimistic that a bipartisan negotiation would follow. Instead, they found themselves quickly cast aside as Democrats used the fast-track budget reconciliation process to shield their own package from a filibuster and pass the plan solely with Democratic votes.

This time, Republicans have put forth a plan that is a fraction of the size of Mr. Biden’s, and the story could be on track to repeat itself.

With the president professing interest in G.O.P. input on his infrastructure plan, Republicans are concerned that Mr. Biden will once again cut them out of the process, fretting his Oval Office audiences with them could be short-lived attempts at bipartisanship. Still, many are wary of being painted as unwilling negotiators on yet another major economic package.