Home » Politics » Rishi: I want a society that rewards ingenuity and work

Rishi: I want a society that rewards ingenuity and work 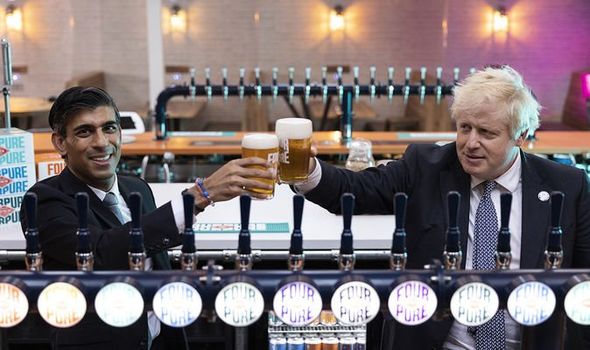 In a defining Budget for the nation’s future, the Chancellor declared it was time the Tories moved away from the Covid era when Government was expected to have the answer to everything. He unveiled a colossal £150billion spending spree on the back of Britain’s economy returning to pre-pandemic levels by the turn of the year.

His aim is to bring down the tax burden that has soared to the highest level since the 1950s, due to the Covid crisis.

“My goal is to reduce taxes. By the end of this Parliament, I want taxes to be going down not up,” he told the Commons yesterday. He admitted his dislike for having to hike taxes in response to the pandemic and refused to apologise for wanting to let taxpayers keep more of the “rewards” of their hard work in the future.

Prime Minister Boris Johnson joined Mr Sunak after the speech to toast the nation’s future as both looked forward to a new era of optimism over a pint at the Fourpure Brewery in Bermondsey, south London.

Mr Sunak’s Budget and Spending Review yesterday set the Government on course for the fastest-rising spending on schools, hospitals and other public services this century.

Expenditure on schools is to return to 2010 levels by the middle of the decade while the foreign aid budget, cut in response to the pandemic pressure, is set to return to 0.7 percent of national output by 2024.

His spree will be partly fuelled by a multi-billion pound windfall thanks to a far faster than expected economic bounce back from the Covid lockdowns, with growth tipped to hit 6.5 percent this year.

Amid warnings inflation could soar over four percent next year, he also announced Budget measures to help households meet the cost of living with a fuel duty freeze.

Two million low income households receiving the Universal Credit welfare benefit will get a tax cut worth around £1,000 a year on average.

Mr Sunak also confirmed that the one-year pay freeze in the public sector will end, paving the way for an income boost for nurses, teachers and other key workers.

And the National Living Wage rises to £9.50 from April. In other measures, he unveiled a shake-up of alcohol duty that will mean cheaper beer in pubs and lower levies on low alcohol drinks. He also pledged business tax cuts worth ­£7billion over five years.

And a new lower rate of Air Passenger Duty for flights within the UK is due to be introduced by 2023.

But amid the generosity, the Chancellor sought to reassure Tory MPs and voters that his long-term aim is to slim the size of the state and reduce the tax burden.

Mr Sunak sought to present a Budget for “a new age of optimism” and a ­­post-Covid era.

He said: “Employment is up. Investment is growing. Public services are improving. The public finances are stabilising. And wages
are rising.

“Let there be no doubt – our plan is working.”

He said he had not ducked pressure to spend billions on the Covid response because of the “moral” need to protect people from the impact of the pandemic.

“We had to show we could pull together as a country, and we did.”

Ministers had put aside Tory “ideology and orthodoxy” to offer state help during the extraordinary health emergency, he said.

But the country is now on the brink of a new era, and the expansion of the state and the tax burden have to be addressed. Mr Sunak said: “There’s a different kind of moral dimension to the economic challenge we face now.

“Last year, the state grew to be over half the size of the total economy.

“Taxes are rising to their highest level as a percent of GDP since the 1950s. I don’t like it, but I cannot apologise for it – it’s the result of the unprecedented crisis we faced and the extraordinary action we took in response. But now, we have a choice.”

He indicated the time had come for the Tories to move away from the era where Government action and spending taxpayers’ cash are seen as the answers to every ­question. Instead, the Government “should have limits”.

Mr Sunak added: “If this seems a controversial statement to make, then I’m all the more glad for saying it because that means it needed saying and it is what we believe.”

He said “family, community and personal responsibility” were more important than “the market or the state”.

Last night, Mr Sunak told Tory activists his tax cut for Universal Credit claimants was a “first step” towards his aspiration for tax cuts for all before the election, expected in 2023 or 2024.

In an online question-and-answer session for party supporters, he said: “My mission over the rest of this Parliament is for taxes to be going down, not up. That’s what I want to deliver.

“But I don’t want it to be just empty rhetoric, which is why I wanted to start a step on that journey today with our very significant tax cut for those on the
lowest incomes.”

Speaking in a pre-recorded interview last night, Mr Sunak said: “We have invested in public services and our future growth.

“But we’ve done so mindful of inflationary pressures, and part of the reason that I talk about strong public finances, making sure we get our borrowing down, and get our debt falling again, is because I want to protect us against future rises in interest rates.

“We have to have a bit of a buffer to cope with those, and that’s what this Budget delivers.” Labour claimed the measures failed to address the soaring cost of living. Shadow chancellor Rachel Reeves said: “As he hits working people with the highest sustained tax burden in peacetime, he’s giving a tax cut to bankers who like to take short-haul flights while sipping Champagne.

“After taking £6billion out of the ­pockets of some of the poorest people in this country, he is expecting them to cheer today at being given £2billion to compensate.”

Last night, the public gave the Budget the thumbs-up after a snap poll showed a majority of 53 percent approved of the measures announced by the Chancellor.

The poll from Savanta ComRes found 62 percent of Conservatives approve of the spending commitments.

Mr Sunak and Simon Clarke, the Chief Secretary to the Treasury, had earlier been seen talking through the Budget in the offices of 11 Downing Street.

So how did he do it? Despite having presided over the biggest national debt rise in our modern history, Rishi Sunak showered Britain with tax cuts and increases in public spending.

And he did it all while being so confident financial markets would not take fright, he even referred to a “new age of optimism” and boasted of being able to reduce borrowing as a share of GDP over the next few years.

He announced spending on public services would rise by a whopping £150billion over the current Parliament, as well as major extra investment in housing, science, transport infrastructure and research.

At the same time, another fuel duty rise was called off, a previously-announced increase in alcohol duties scrapped and there were a slew of targeted tax cuts on everything from internal UK flights to sparkling wine and draught beer and cider.

A support package for businesses, including a big cut in business rates for retail, hospitality and leisure sectors, amounted to another £7billion of largesse.

And the big surprise was a more generous regime for Universal Credit claimants.

However, it will help those who work make up the £20-a-week Covid emergency uplift that is being withdrawn – but there is no such compensation for those not in work.

Many voters so cynical about politics will be inclined to believe it must all be another smoke-and-mirrors conjuring trick. But that would not be fair on Mr Sunak. The main reason he was in clover yesterday was that he took a calculated gamble last year and it paid off handsomely.

Instead of reacting to the Covid crisis by cutting back public spending – as a previous Tory regime did after the banking crisis – he did the opposite, spending hundreds of billions extra on schemes to keep businesses and employees going and stave off a depression.

Of course, it could all yet go wrong. Inflation is likely to hit four per cent next year and if the Bank of England were to react by raising interest rates by one per cent, it would cost the Treasury an extra £23billion just to service the national debt. The picture would suddenly look a lot less rosy.

In the long term, extra money spent on levelling-up regions needs to come good too, with people exploiting the new opportunities that better infrastructure will provide to boost the overall economic growth rate.

As Sunak put it: “The only limit to our potential is the effort we are prepared to put in.” Most of us would surely have bitten his hand off for such a deal in those traumatic early days of the pandemic.