Rishi: Its un-conservative to load future generations with debt from Covid crisis 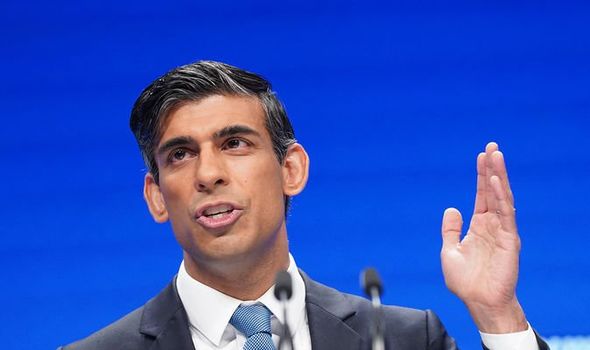 The Chancellor admitted that raising taxes is “unpopular”, but added: “I want tax cuts but… our public finances must be put back on a sustainable footing”.

It was Mr Sunak’s first in-person address to a Tory conference since he took the Treasury reins weeks before the pandemic struck.

Although he has spent £400billion since then to prop up the economy and to protect jobs, he told party delegates in Manchester that fiscal responsibility combined with doing what works have been at the heart of all his decisions.

He said: “Just borrowing more money and stacking up bills for future generations to pay is not just economically irresponsible, it is immoral. Because it’s not the state’s money, it’s your money.”

The Chancellor set out a vision to make Britain the “most exciting place on the planet”, at the forefront of scientific innovation.

He said Brexit will help the recovery by making the UK more flexible and by fostering a “culture of enterprise” but warned there cannot be a prosperous future without strong public finances.

Mr Sunak has faced criticism at plans to increase national insurance to pay for social care reforms, not least from within his party.

Some Cabinet colleagues made it clear privately they are deeply unhappy while Commons Leader Jacob Rees-Mogg warned publicly that current tax levels are at “the limit”.

The Chancellor admitted putting up taxes is unpopular, but insisted it would be “un-Conservative” to allow debt to soar or to resort to reckless borrowing.

He added: “Yes, I want tax cuts. But in order to do that our public finances must be put back on a sustainable footing.” He said recovery from the pandemic “comes with a cost”, with national debt almost 100 percent of gross domestic product: “So we need to fix our public finances.”

The Britain of the future will be built on a high-skilled, high-wage economy that harnesses the potential of technology, Mr Sunak predicted to his audience.

A £500million plan for jobs will help people get back into work or move to better-paid posts.

The Chancellor announced action to bolster the UK as a global leader in artificial intelligence (AI), which might boost the economy by around £200billion a year if it matches the transformational impact achieved by similarly life-changing technological advances such as the steam engine, computers and the internet.

A £34million fund will pay for 2,000 scholarships for disadvantaged students in the sector. Mr Sunak said: “As the latest general-purpose technology, AI has the potential to completely transform whole economies and societies. We want the UK to be a scientific superpower but also a high-skilled, high-tech economy.

“This new fund will allow more young people from disadvantaged backgrounds to learn new skills and train up for the jobs of tomorrow in the new and exciting industries of the future such as AI.”

Mr Sunak told the Tory faithful he was proud of being a Brexiteer and said Britain’s independence will help secure a brighter future, claiming that optimism was at the heart of voters’ decision to leave the EU. The Chancellor also revealed he was warned five years ago that his political career “would be over before it had even begun” if he backed Brexit.

“Despite the challenges, in the long term I believed the agility, flexibility and freedom provided by Brexit would be more valuable in a 21st-century global economy than just proximity to a market.

“That in the long term a renewed culture of enterprise, willingness to take risks and be imaginative would inspire changes in the way we do things at home.”

Mr Sunak was introduced on the stage by John Chihoro, who has benefited from support under the Kickstart scheme for youngsters.

The 24-year-old said that the six-month placement programme gave him a chance to do meaningful work – and led to a permanent job.

The Chancellor was watched from the floor of the packed conference hall by Prime Minister Boris Johnson.

Mr Sunak said: “Just the moment it feels like we’ve done enough, that we’ve gotten through, that we can take a rest, we must not stop.

Business leaders last night backed his blueprint for economic recovery, but called for financial burdens on employers to be eased.

CBI director-general Tony Danker said: “Business shares the Chancellor’s ambitious vision for a high-growth economy driven by science, technology and innovation. Government can rely on the skills, ingenuity and delivery capability of business to realise this.

“Emphasis on equipping young people for the world of work, from the Kickstart scheme to new AI scholarships, as well as helping people retrain for the jobs of the future is the right approach.

“The only way to achieve the high-wage, high-skill economy we all want is to unlock productivity through higher investment and growth. All must rise together to avoid a further squeeze on living standards and to realise a better decade than the last.”

Mike Cherry, national chairman of the Federation of Small Businesses, said: “Ambition is not enough – small firms need to see action. While it’s good to see some practical changes being announced by the Chancellor to get people back into work after the end of the furlough scheme, there needs to be far more focus on helping employers actually create jobs.”

Shevaun Haviland, director-general of the British Chambers of Commerce, said: “The Chancellor’s ambition is to be applauded but details, as ever, matter. The focus should be on creating the best possible environment for businesses to grow and thrive, so they can sustainably deliver the tax revenue needed to return our public finances to a sustainable path.”