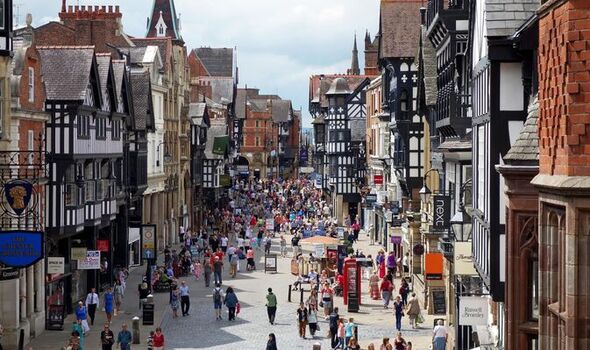 In what may prove the first significant test of new Prime Minister Rishi Sunak’s electoral appeal, voters have gone to the polls in the north-west City of Chester constituency. The Conservative party will be hoping to buck the trend seen in recent national polling, which has seen YouGov putting the party at just 22%, with Labour enjoying a 25-point lead at 47%. The Labour Party is widely expected to retain the Chester seat in this election, with polling from Britain Predicts showing 55 to 65% of the vote going to Keir Starmer’s party in 2022.

In campaigning, the local party has centralised much of its pitch around its candidate, Sam Dixon, and her deep ties to the Chester community.

This pitch seems to have reached voters on the ground, with Margot, 67, telling Express.co.uk she would be voting Labour, despite having voted both Conservative and Liberal Democrat in the past, speaking of Mrs Dixon’s “good local knowledge” and “integrity” while also hoping “it sends a message to the Conservatives” based on their conduct during and after Lockdown.

Mrs Dixon, born in Chester, served as a councillor for 12 years and was the first woman leader of the Cheshire West and Chester Council.

However, it is not all plain sailing for the party.

The by-election was called following the resignation of the city’s former Labour MP, Christian Matheson, after allegations of sexual misconduct.

Mr Matheson appealed but ultimately resigned the seat after the finding was upheld, saying it was the “honourable and right thing to do” and apologising to the complainant in the case.

Some local voters have also decided their ballot on more national issues, with the new Prime Minister being one of them.

Kevin Ryan, 74, told Express.co.uk he would be voting Conservative, believing the party to be “on the right path, especially now Sunak is in.”

He also mentioned that he was unhappy with the leadership of the Labour Party nationally, feeling they “had no real policy behind them.”

The local Conservative candidate is Liz Wardlaw, a councillor in Cheshire since 2015 and a nurse who came out of retirement to volunteer with health services in Cheshire during the Covid-19 pandemic.

Party Chairman, Nadhim Zahawi, has also been campaigning in the seat.

Though both the Liberal Democrats and the Green Party are also fielding candidates, several smaller parties are also standing in the by-election, including candidates for Reform UK and Rejoin EU.

Margaret, 83, who has historically voted for UKIP, revealed that she would not be voting for either of the two main parties standing, saying how they were “all the same” and “don’t do anything.”

The City of Chester seat (once held by the politician-turned-broadcaster/writer Gyles Brandreth) had historically been a Conservative seat but became a swing seat after the Blair landslide of 1997.

While the Tories won the seat back in 2010 under David Cameron, it has trended Labour in the last couple of elections after the party claimed victory with a wafer-thin 93 vote margin in 2015.

The biggest problem for all the parties standing in the 2022 Chester by-election will have is turning out their voters.

By-elections typically see less turnout than general elections, and, on the ground, more than a few potential voters seemed unaware that a by-election was taking place. This, coupled with the cold of a winter election, could show a smaller voter turnout than before.

How the Conservative party does in this election will undoubtedly see the new PM’s electoral appeal put to the test, with the City of Chester likely to be a seat that the Tories would be looking to win back in the next general election.

With the West Lancashire by-election also looming, following Rosie Cooper’s decision to leave parliament, many observers will keep a keen eye on the votes cast and how they translate for the expectations of the parties and candidates involved.