WASHINGTON — In early 2020, members of a Taliban-linked criminal network in Afghanistan detained in raids told interrogators that they had heard that Russians were offering money to reward killings of American and coalition troops.

The claim, that Russia was trying to pay to generate more frequent attacks on Western forces, was stunning, particularly because the United States was trying at the same time to negotiate a deal with the Taliban to end the long-running war in Afghanistan. C.I.A. analysts set out to see whether they could corroborate or debunk the detainees’ accounts.

Ultimately, newly declassified information shows, those analysts discovered a significant reason to believe the claim was accurate: Other members of the same Taliban-linked network had been working closely with operatives from a notorious unit of the G.R.U., the Russian military intelligence service, known for assassination operations.

“The involvement of this G.R.U. unit is consistent with Russia encouraging attacks against U.S. and coalition personnel in Afghanistan given its leading role in such lethal and destabilizing operations abroad,” the National Security Council said in a statement provided to The New York Times.

The statement was originally drafted and declassified to serve as talking points for officials to use in briefing reporters last month about U.S. sanctions and other punishments against Russia. The White House took diplomatic action — delivering a warning and demanding an explanation for suspicious activities — about the bounty issue, but did not base sanctions on it. The Biden administration did impose sanctions for Russia’s SolarWinds hacking and election interference.

In briefing reporters, a senior administration official noted that the intelligence community had assessed with “low to moderate confidence” that Russia had offered bounties. The official, focusing on other complex issues, skipped over most of the newly declassified information that had been prepared to explain what the government knew about the bounty issue.

Afterward, some commentators treated the bare line about confidence levels as a new development that amounted to the government walking back its suspicions from 2020. But The Times had reported last summer that different intelligence agencies, while agreeing on the assessment itself, disagreed on whether to put medium or lower confidence in it. The evidence available to analysts — both alarming facts and frustrating gaps — essentially remains the same.

The release of the full talking points as a statement is the government’s most detailed public explanation yet about how the C.I.A. came to the judgment that Russia had most likely offered financial incentives to reward attacks on American and allied troops. It also sheds new light on the gaps in the evidence that raised greater concerns among other analysts.

In the world of intelligence analysis, moderate confidence means the judgment was based on information deemed to be credibly sourced and plausible. Low confidence flags significant concerns about the quality of the sourcing underlying a judgment.

In the case of the bounty intelligence, officials have said the surveillance-focused National Security Agency more sharply discounted its confidence in the assessment — to “low” — because of a key gap. It had not intercepted any smoking-gun electronic communication about a bounty plot. (The Defense Intelligence Agency shares that view, while the National Counterterrorism Center agrees with the C.I.A.’s “moderate” level, officials have said.)

But the statement reveals that despite that disagreement over how to rate the quality of available information underlying the core assessment, the intelligence community also had “high confidence” — meaning the judgment is based on high-quality information from multiple sources — in the key circumstantial evidence: Strong ties existed between Russian operatives and the Afghan network where the bounty claims arose.

“We have independently verified the ties of several individuals in this network to Russia,” the National Security Council statement said. It added, “Multiple sources have confirmed that elements of this criminal network worked for Russian intelligence for over a decade and traveled to Moscow in April 2019.”

The declassified statement also opened a window into American officials’ understanding of the Russian operatives, known as Unit 29155 of the G.R.U. The government has previously resisted talking openly about group, although a Times investigation in 2019 linked it to various operations, citing Western security officials who spoke on the condition of anonymity.

By contrast, the National Security Council statement identified other “nefarious operations” around the world that the government thought the squad had carried out — to explain why the discovery of its involvement with the Afghan network was seen as bolstering the credibility of the detainees’ claims about Russian bounties.

“We have a strong body of evidence of the activities of this G.R.U. unit,” the statement said, accusing it of “a plot to violently disrupt Montenegro’s legislative election in 2016,” of the 2018 poisoning of a former G.R.U. officer, Sergei V. Skripal, in Salisbury, England, and of “assassinations across Europe.” 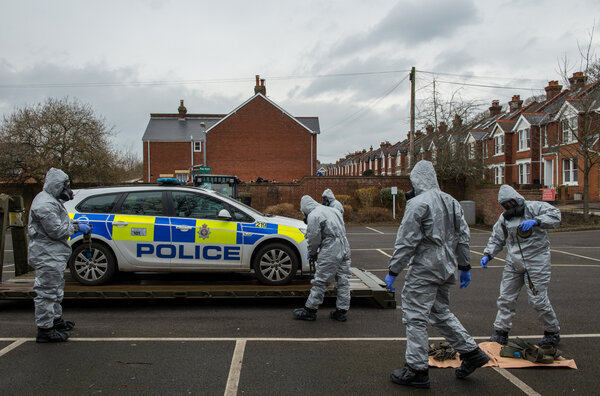 The American government’s decision to declassify intelligence about Unit 29155 for public discussion came as two European countries publicly raised suspicions recently that the unit was responsible for sabotage operations on their soil.

In mid-April, the prime minister of the Czech Republic said there was “clear evidence,” assembled by intelligence and security services there, establishing “reasonable suspicion” that Unit 29155 was involved in two explosions at ammunition depots that killed two Czechs in 2014. He said the government would expel nearly 80 Russian diplomats.

Days later, the prosecutor general’s office in Bulgaria announced that it was investigating a possible connection between Unit 29155 and four explosions at ammunition depots over the past decade. At least two happened while members of the unit were frequently traveling in and out of Bulgaria, the office said.

Some of the destroyed arms in both countries, according to officials, belonged to Emilian Gebrev, a Bulgarian arms manufacturer who was poisoned in 2015 along with his son and an executive in his company. Officials have previously accused Unit 29155 in that attempted assassination.

While most previous reports about Unit 29155’s activities have centered in Europe, its leader, Maj. Gen. Andrei V. Averyanov, has experience in Central Asia. He graduated in 1988 from the Tashkent Military Academy in what was then the Soviet republic of Uzbekistan, a year before the Soviet pullout from bordering Afghanistan.

The government apparently did not declassify everything. The White House statement described but did not detail certain evidence, keeping its sources and methods of information-gathering secret. It did not specify the G.R.U. unit’s number, but officials have said it was Unit 29155, and the two prior operations the statement mentioned have been attributed to it elsewhere.

The White House also did not identify the members of the Afghan network it accused of direct interactions with Unit 29155. Three officials have previously named them as Rahmatullah Azizi, a onetime drug smuggler who grew wealthy as a middleman for the Russian spies, and Habib Muradi. Both escaped capture and are said to have fled to Russia.

And it made no mention of other circumstantial evidence officials have previously described, like the discovery that money was transferred from a G.R.U. account to the Afghan network.

In an interview published April 30 in a Russian newspaper, Nikolai Patrushev, the chairman of Russia’s Security Council, again said it was false that Russia had covertly offered bounties for killing American troops in Afghanistan, adding that there was no evidence that it had done so.

The White House statement also brought into sharper focus two gaps in the available evidence that analysts saw as a reason to be cautious.

Military leaders have repeatedly pointed to one in public: The intelligence community lacks proof tying any specific attack to a bounty payment. “We cannot confirm that the operation resulted in any attacks on U.S. or coalition forces,” the National Security Council said.

The other reason for caution is an absence of information showing that a Kremlin leader authorized Unit 29155 to offer bounties to Afghan militants. “We do not have evidence that the Kremlin directed this operation,” the statement said.

The Biden administration’s briefing to reporters last month reignited a debate over the political implications of the C.I.A.’s assessment — and the Trump White House’s handling of it — that unfolded last year and dwelled in part on confidence levels.

The Times reported last June on the existence of the C.I.A. assessment and that the White House had led an interagency effort to come up with options to respond but then authorized none.

Facing bipartisan criticism, the Trump administration defended its inaction by playing down the assessment as too weak to take seriously, falsely denying that it had been briefed to President Donald J. Trump. In fact, it had been included in his written presidential daily briefing in late February, two officials have said.

In congressional testimony, military leaders based in the United States who regularly interacted with the Trump White House said they would be outraged if it were true, but they had not seen proof that any attack resulted from bounties. But some military officials based in Afghanistan, as well as some other senior Pentagon and State Department officials, thought the C.I.A. was right, according to officials familiar with internal deliberations at the time.

Among those who found the evidence and analysis persuasive was Nathan Sales, the State Department’s politically appointed top counterterrorism official during the Trump administration.

“The reporting that Russia was placing bounties on American soldiers’ heads was so serious that it warranted a robust diplomatic response,” Mr. Sales said this week in an email.

A top Pentagon official and the secretary of state at the time, Mike Pompeo, later delivered warnings over the issue to their Russian counterparts, effectively breaking with the White House.

After the briefing last month, some Trump supporters — as well as some left-wing critics of the C.I.A. and military interventions — argued that the C.I.A.’s bounty assessment had been debunked as evidence-free “fake news,” vindicating Mr. Trump’s dismissal of the issue last year as a “hoax.” Russian propaganda outlets echoed and amplified those assertions.

Michael J. Morell, a former acting director of the C.I.A., said another factor had fostered confusion. When analysts assess something with low confidence, he said, that does not mean they think the conclusion is wrong. Rather, they are expressing greater concerns about the sourcing limitations, while still judging that the assessment is the best explanation of the available facts.